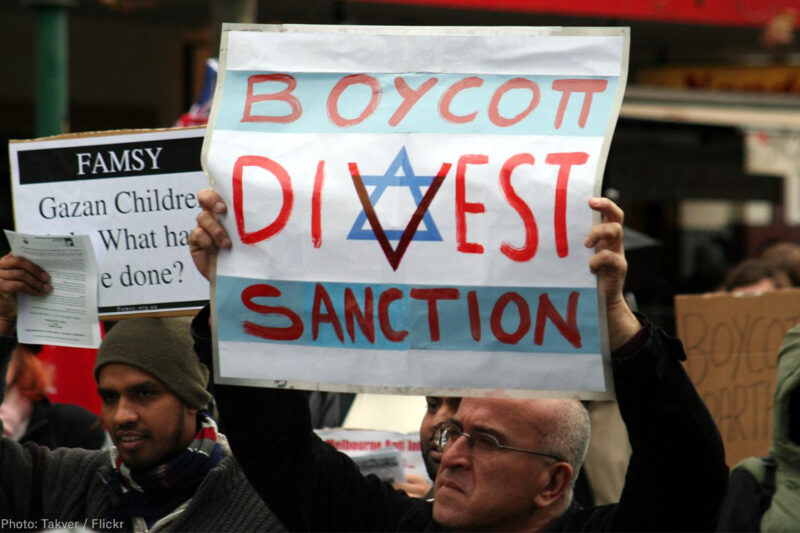 Over the weekend, two senators introduced changes to the Israel Anti-Boycott Act, which would criminalize participation in certain political boycotts targeting Israel. The changes attempt to address the civil liberties concerns raised by the ACLU and other groups.

Unfortunately, the revised bill still violates the First Amendment. It does so by unconstitutionally penalizing Americans who participate in political boycotts of companies doing business in Israel and its settlements in the occupied Palestinian territories, if those boycotts were called for by international governmental organizations like the United Nations.

This is impermissible. Political boycotts are fully protected by the First Amendment. The Supreme Court made that clear when it recognized, in a landmark 1982 decision called NAACP v. Claiborne Hardware, that the Constitution protected a 1960s boycott of white-owned businesses in Mississippi. If the Israel Anti-Boycott Act were to pass and take effect, we would strongly consider challenging it in court.

The Israel Anti-Boycott Act seeks to amend a 1970s law known as the Export Administration Act. That law was passed in response to the Arab League’s boycott of Israel, which required U.S. businesses to boycott Israel as a condition of doing business with Arab League countries. To prevent foreign countries from bullying U.S. businesses into these compulsory boycotts, the EAA prohibited U.S. companies from entering into agreements with foreign governments to boycott countries friendly to the United States. Whereas the EAA was meant to protect U.S. companies from these compulsory boycotts, the Israel Anti-Boycott Act seeks to dictate the political activities Americans can and can’t engage in. It does so by imposing civil and criminal penalties on American organizations that participate in political boycotts called for by international organizations.

The revised Israel Anti-Boycott Act, amended by Sens. Ben Cardin (D-Md.) and Rob Portman (R-Ohio), does contain several significant improvements from the original draft. For example, the bill now makes clear that Americans cannot be imprisoned for their boycott participation. It also provides that speech critical of Israel cannot be used to open an investigation against an individual or as evidence that the person violated the law. These changes alleviate some of the gravest dangers posed by the bill.

But this latest version would still allow people who boycott to be slapped with criminal financial penalties. It suffers from the same fundamental flaw as the original draft by criminalizing participation in constitutionally protected boycotts. In fact, the bill’s sponsors openly admit that it was designed for this purpose. In the press release accompanying its announcement, Sen. Mike Crapo (R-Idaho) described the bill as an attempt to “combat Boycott, Divestment, and Sanctions (BDS) efforts targeting Israel.” Sen. Sherrod Brown (D-Ohio) also characterized the bill as “anti-BDS legislation.” Although the bill states that “[n]othing in this Act . . . shall be construed to diminish or infringe upon any right protected under the First Amendment,” these words rings hollow in light of the bill’s obvious purpose.

The Israel Anti-Boycott Act cannot be viewed in isolation. It is part of a sustained legislative campaign in the state and federal governments to suppress boycotts of Israel. Just a few weeks ago, a federal court in Kansas agreed with the ACLU’s First Amendment challenge to a law requiring state contractors to certify that they are not participating in boycotts of Israel. The court recognized that the Kansas state government could not constitutionally suppress our client’s boycott to silence one side in the public debate over the Israeli-Palestinian conflict. In halting enforcement of the law, the court held that our client’s boycott of Israel:

“is protected for the same reason as the boycotters’ conduct in [NAACP v. Claiborne Hardware] was protected. . . . Namely, its organizers have banded together to express collectively their dissatisfaction with the injustice and violence they perceive, as experienced by both Palestinian and Israeli citizens.”

From the campaign to divest from apartheid South Africa to the recent boycott against the National Rifle Association, boycotts have always been a key feature of American politics. If state and federal governments could outlaw boycotts they don’t like, all sorts of social movements would suffer. Whatever their views are on Israel and Palestine, members of Congress should recognize that the Israel Anti-Boycott Act threatens fundamental First Amendment values. We urge them to oppose it.