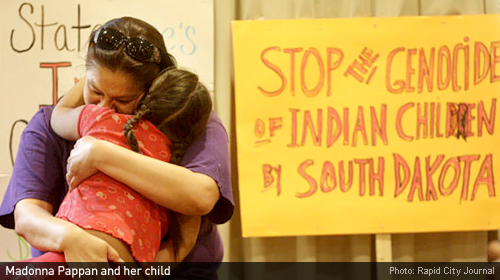 Imagine the government taking away your two children in a hearing that lasts less than 60 seconds.

Madonna Pappan and her husband, members of the Oglala Sioux Tribe in South Dakota, don’t have to imagine it, because it happened to them. And they’re not alone: An American Indian child in South Dakota is 11 times more likely to be sent to foster care than a non-Indian child.

Imagine receiving a life sentence without the possibility of parole for serving as a go-between in the sale of two small $5 bags of marijuana. That’s exactly what happened to Fate Vincent Winslow, an African American homeless man who says that he accepted the offer of an undercover police officer for a $5 commission in order to earn some money to get something to eat. Mr. Winslow is now serving a life sentence, without the possibility of parole, in Louisiana for this and his other prior non-violent crimes. In that state, African Americans are serving life without parole sentences for nonviolent crimes at approximately 23 times the rate of whites. Nationwide, an estimated 65.4 percent of the prisoners serving such sentences are African American.

These are but two examples of the widespread racial disparities that continue to exist in the United States, and which result in serious and pervasive human rights violations in a wide range of areas, from racial profiling to voting rights.

At the review, a high level U.S. government delegation will officially present a report submitted by the United States in June 2013 on its ICERD compliance, and answer questions on progress made and challenges remaining towards implementation of the treaty. Following this examination, the United Nations Committee on the Elimination of Racial Discrimination will issue a report on its findings, identifying major areas of concern and incorporating recommendations on how the U.S. government might better implement the treaty.

To help inform the review, the ACLU submitted a report today to the U.N. committee, highlighting several examples of pervasive and institutionalized discrimination in the United States. It addresses the following issues:

It’s been 50 years since the passage of the Civil Rights Act, and 20 since the ratification of the ICERD. In many respects, we’ve come a long way. But we’re not finished. Let’s hope the Obama administration views the upcoming review as an opportunity to move us forward.