DHS' Threat to Prosecute Officials of Sanctuary Cities Is Unconstitutional 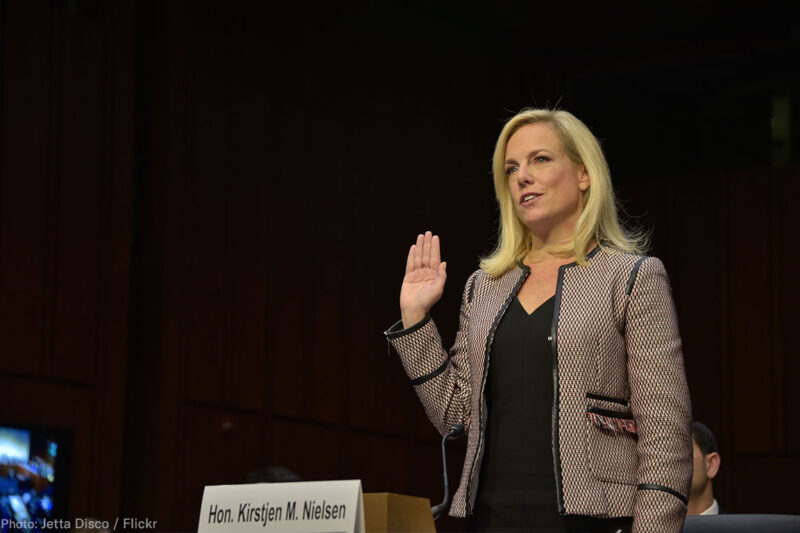 In testimony before Congress yesterday, Secretary of Homeland Security Kirstjen Nielsen confirmed that her agency is seeking the prosecution of state and local officials in jurisdictions that limit their entanglement with federal immigration enforcement.

Even in the context of the Trump administration’s frequent disregard for the Constitution, Nielsen’s threat to prosecute mayors, legislators, and police chiefs over policy disagreements is shocking. There is no basis in federal law to prosecute government officials who decide, with and on behalf of their constituents, that their communities are better served by opting out of participation in the federal deportation system. And that kind of prosecution would be an assault on the principles at the core of our constitutional system.

Nielsen’s threat may or may not be empty. Either way, it is unacceptable. 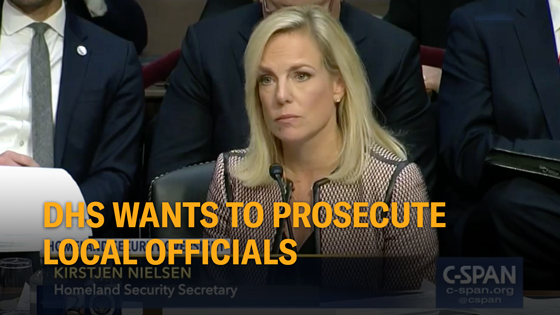 We are now nearly one year into the Trump administration’s seemingly endless attempts to threaten, cajole, and coerce local governments into abandoning what is commonly referred to as “sanctuary” policies. There are hundreds of such jurisdictions that, in a variety of ways, have decided not to entangle themselves in the federal government’s deportation program. Those communities have decided it’s not worth the financial burden or legal risk or harm to public safety and community trust — or all of the above.

Unhappy with those decisions, the administration has tried a laundry list of tactics over the last year to intimidate localities into giving up. Its attempts to take away federal funding, for example, have been met with defeat after defeat after defeat in the courts. And its attempt to publicly embarrass localities into changing their policies with a weekly report had to be suspended when Immigration and Customs Enforcement’s rampant errors came to light and law enforcement rightly balked at this form of bullying.

The most recent broadside in this campaign is the administration’s decision to float the possibility of criminal prosecutions. In an interview earlier this month, Acting ICE Director Thomas Homan said he had asked the Justice Department to look into charging local officials with violating a federal statute for “harboring” noncitizens. Yesterday, Secretary Nielsen doubled down, confirming that her agency had sought such prosecutions. And, like Homan, she made clear that the threat of prosecution was being used as a political cudgel.

These threats are lawless and baseless. Local officials commit no crime when they and their communities decide not to participate in deportations. They do not, as Homan wrongly claimed, harbor anyone from deportation by simply opting out. ICE can arrest people on its own — and in fact Congress gives the agency billions of taxpayer dollars each year to do just that.

But local police are under no obligation to use their time and resources to help with arrest, detention, and deportation. Local jails need not allow ICE agents to roam their facilities, conduct interrogations, and make arrests without a judicial warrant. And government officials need not share home addresses of local residents to make it easier for ICE to carry out its mass deportation campaign. The point of sanctuary policies is non-participation, meaning that if ICE wants to arrest and deport people it must do the work itself. There is nothing at all criminal about that, and it is irresponsible to suggest otherwise.

In fact, state and local governments’ ability to opt out of the federal deportation system is constitutionally guaranteed. The framers of the Constitution recognized that distributing authority — including between the federal government and the states — protects against the accumulation and abuse of power by a tyrant or group of tyrants. As the Supreme Court has explained, this principle prevents the federal government from requiring state and local officers to become de facto federal agents. Therefore, even if the administration’s imaginary crime of declining to help ICE deport people actually existed, it would be struck down as unconstitutional.

Of course, these threats may be empty, like the now-disavowed threats to strip “sanctuary” cities of all their federal funding. But, regardless, the idea of these prosecutions is insidious. At bottom, the administration’s complaint is that localities are adopting policies with which it disagrees. This idea of locking up elected officials for their political speech, beliefs, and votes is contrary to the First Amendment and the democratic principles on which our country was founded. Even the suggestion is dangerous and reprehensible.