As a Dreamer, I Will Not Be a Bargaining Chip for Trump’s Attack on Immigrants 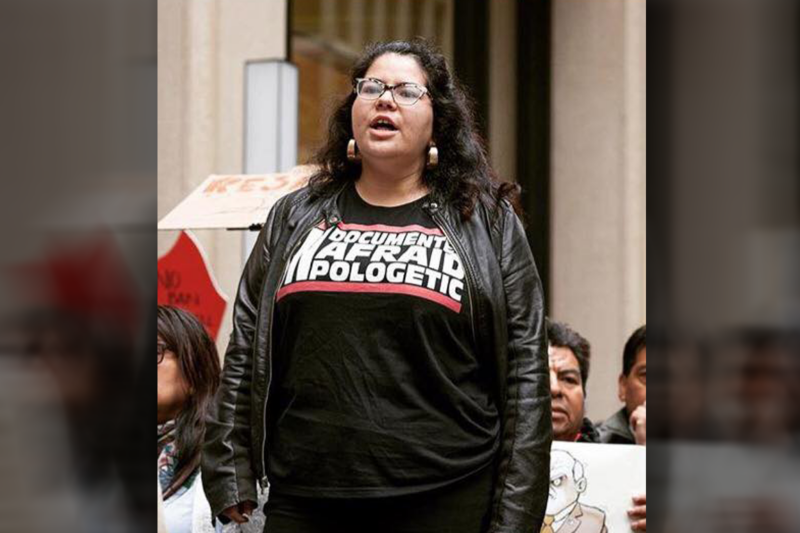 So many words come to mind right now to describe how I feel about the loss of DACA: devastation, anger, rage, betrayal, hopelessness, fear, sadness. DACA transformed my life.

DACA allowed me to attend college, plan for my future, and work. But one of the most valuable things DACA brought me was peace of mind. I knew that I would no longer have to duck my head to scurry past police officers. I knew I would have my driver’s license as a form of government-issued ID so I would not stand out when boarding a plane or even getting a library card. I stopped constantly fearing deportation. I slept easier at night knowing that I would wake up the next day with the ability to plan at least the next two years of my life and that I would be able to help my parents. I didn’t have a seemingly unending pit of fear in my stomach that often turned into full-fledged panic attacks.

The enormity of the obstacles I had been up against, for once, seemed manageable. I became more confident in my status and in talking openly about it. But now, as I once again “become” undocumented, I worry that many of us who have been public about our stories will be forced to go back into the shadows.

Being undocumented forces people to live a huge amount of uncertainty. My parents and I came to the United States from Chile in search of a better life when I was 6 years old. Growing up undocumented, I couldn’t imagine my future. I didn’t know how I was going to be able to go to college or pay for it. Once I was in college, before I got DACA, I did not know if I was going to be able to use my degree afterwards. Even as I consider grad school now, I don’t know whether I’ll be able to attend, or later, to work. My way of handling all of this has been by carefully concocting contingency Plans B, C, D, and E, always prepared to go into effect at any moment. “Expect the worst and hope for the best,” is my family motto.

Thousands of DACA recipients will lose their work permits each day after it is rescinded, meaning thousands of families that depend on those young people will risk losing their livelihoods. Student loans and mortgages will go unpaid. Young parents will be unable to provide for their children. Your co-worker, teacher, or boss will not show up to work. People’s plans and dreams will fade, some people might even disappear from your life entirely, as more people will consider going into hiding, or committing suicide as some did after the election. This is real pain. We, together as a community, must go through a mourning process.

But in some sense, this is also liberating. We all knew this day would come. DACA was so fragile. Not because it’s unconstitutional, as Attorney General Sessions claims — he’s wrong —but because it was a superficial solution for a much bigger problem, a temporary Band-Aid that would eventually have to be replaced by something stronger. DACA set up a narrative of good versus bad immigrant; it creates the categories of those who are deserving and undeserving by criminalizing our parents, who did us a great service by bringing us to this country. We should not have to hide behind the rhetoric that “we were brought here through no fault of our own.” It felt like it forced a choice between our parents, who brought us to this country with nothing but hope of a better life for us, and our own futures.

Of course, we will fight and resist the end of DACA, but we must also prepare ourselves for the bigger battles ahead. We must think beyond this limited disqualifying narrative that aims to divide us the immigrant community into good and bad people. We must strive for a solution that reaches beyond the 800,000 Dreamers who were granted DACA.

The Trump administration wants to use Dreamers as a bargaining chip to get Congress to fund and authorize a massive crackdown on immigrant communities in this country. They want to force us – in a desperate attempt to save Dreamers – to throw the very people who taught us how to dream under the bus: our parents. The people who came before us and who fought before us. Saving Dreamers should not mean that more detention centers are built or funding for the wall. We have to resist, no matter how appealing a pathway to citizenship for Dreamers will appear, and fight for a clean, standalone Dream Act and, ultimately for a pathway for all 11 million undocumented people in this country. We have to stand by our principles and by the people who made it possible for us to dream.

The success of DACA, not only for individuals but for the country, reveals the need for a larger solution. That’s why business leaders have banded together to fight the program’s end. DACA created a different America. Now 800,000 people who received it are out of the shadows. We found our voices. We have further integrated ourselves into the social fabric of the United States. We will not retreat and disappear again. We will not allow our families to be torn apart.

I am now speaking directly to all 800,000 of you out there who are directly impacted by today’s announcement. Allow yourself to grieve — your pain and suffering are justified. Cry all your tears, scream, break down, do whatever you need to do to express the devastation that we all feel. Then wake up tomorrow and be ready to fight, because we are in for the fight of our lives, and I’m ready to win.