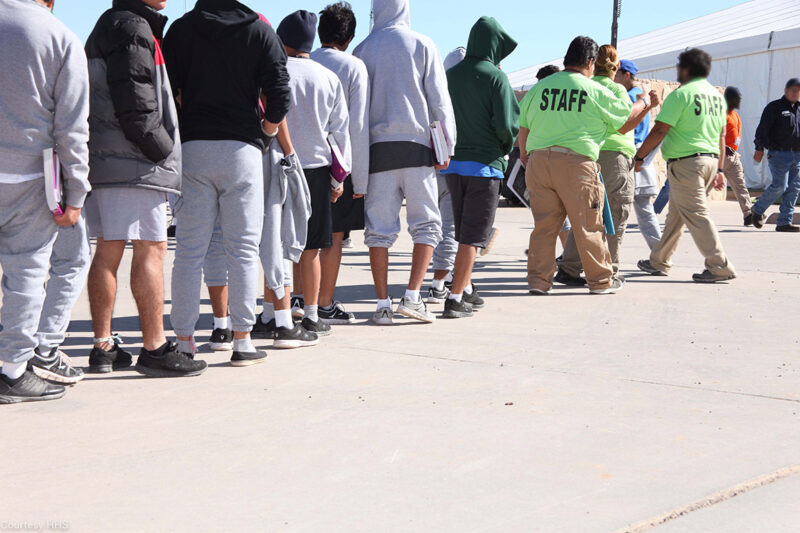 Back in April, Immigration and Customs Enforcement and Customs and Border Protection, both under the Department of Homeland Security, entered into a memorandum of agreement with an obscure government agency known as the Office of Refugee Resettlement, a division of the Department of Health and Human Services. The office, known by its initials ORR, had traditionally served vulnerable immigrant youth coming to the United States without an adult. The agency took custody of those children while it worked to place them with a sponsor, often a relative, who would care for them. But thanks to the Trump administration’s family separation policy, ORR also began taking custody of the thousands of immigrant children forcibly separated from their parents in the past year.

The memorandum of agreement (MOA) transformed ORR from an agency intended to protect the best interests of children into an arm of the government’s deportation force with devastating consequences for children and sponsors alike, as the Associated Press reported on Wednesday. Thanks to the MOA and a new information-sharing system under which ORR is essentially conducting surveillance for DHS, there has been a nearly sixfold increase in children detained by the Trump administration. The ACLU strongly objected to these policy changes when they were first proposed.

In the past, ORR screened potential sponsors for children to evaluate their ability to provide for a child’s safety and well-being. ORR’s focus was, correctly, to ensure the care of children who had come to the U.S. seeking relief and protection. The agency did so by reuniting the majority of children who came alone to the U.S. with relatives already here. Most importantly, ORR had recognized that a potential sponsor’s immigration status does not determine whether a child will be safe and cared for by a sponsor. For ORR, the safety of the child was paramount.

The Trump administration, however, changed all this.

Now, DHS collects information about sponsors from ORR and is explicitly authorized to use that information to carry out arrests and deportations of sponsors and anyone living in their household. Moreover, instead of upholding protections for vulnerable children who might otherwise be forced into labor, prostitution, or other abusive situations, the Trump administration has moved to undermine critical protections for those children. Instead, it is instituting new ways to criminalize and detain immigrant children and chill potential sponsors for detained children from coming forward.

The consequences stemming from the ORR policy change have been as predictable and they have been cruel. Because of ORR’s information-sharing agreement with ICE and CBP, potential sponsors, including those lawfully present here, have been deterred from coming forward to avoid exposing themselves or others in their household to DHS. And DHS has made clear its MOA with ORR isn’t an empty threat. The agency has already arrested dozens of undocumented immigrants who came forward as sponsors and “is pledging to go after more.”

The result has been a record-setting number of children being held by ORR. The number of children — as young as babies and toddlers — detained by our government has skyrocketed, from 2,400 in May 2017 to more than 14,000 in November 2018. Children are also being detained for longer periods of time, dramatically increasing the chances they will suffer severe and irreparable harm, according to the American Academy of Pediatrics. Meanwhile, there has been an influx of business to companies detaining children to the tune of over a billion dollars.

Right now, children continue to languish in ORR facilities when they could otherwise be released to relatives who could provide them with a safe and loving home. Faced with the possibility of detention, some children with valid asylum claims may completely abandon them and get deported back into harm’s way. The government has even forced some children into tent cities, like the one in Tornillo, Texas, with ORR facilities filled to capacity.

On Wednesday, the ACLU and over 100 civil rights, immigrant rights, privacy, and government transparency organizations sent a letter to Secretary of Homeland Security Kirstjen M. Nielsen and Health and Human Services Secretary Alex Azar demanding a reversal of these policies. The Trump administration is going after incredibly vulnerable children. It is unconscionable that the government would use information provided in order to facilitate a child’s reunification with a relative or other sponsor only to turn around and arrest the sponsor or members of their household.

The cruelty of the Trump administration knows no bounds. The solution to yet another Trump manufactured crisis is clear — it must rescind these policies and return ORR to its original mission of ensuring child safety and well-being. And if the administration doesn’t have the common decency to do so, Congress must check the executive and force its hand through legislation and cutting its funding.