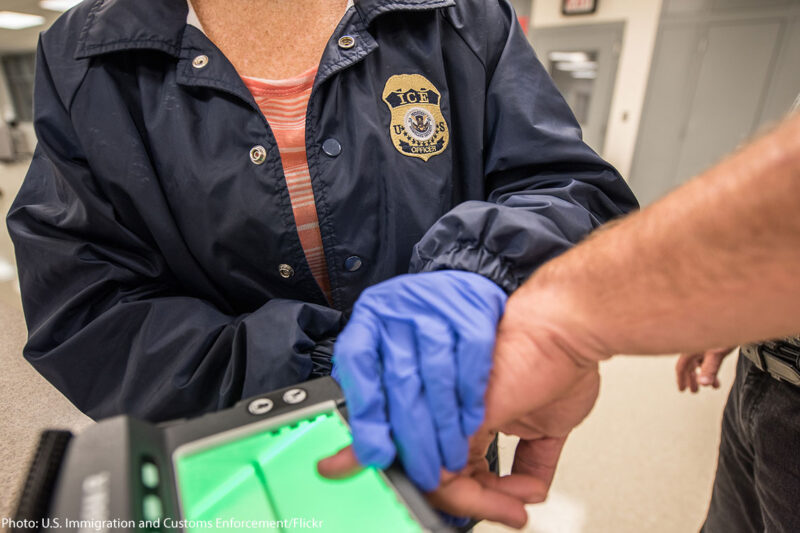 The Trump Administration’s detention of asylum seekers is not only cruel and wasteful, but it is unconstitutional.

Ansly Damus has been locked up for one year, four months, and counting. Held behind bars by Immigration and Customs Enforcement, he has not been outside for more than a year. His crime? In October 2016, Damus fled violent, political persecution in Haiti. When he arrived in the U.S., he presented himself to immigration authorities and applied for asylum. He passed his “credible fear” interview. And then a judge granted him asylum — not once, but twice.

Damus committed no crime, and yet the U.S. government has put him behind bars. He’s not alone — thousands of other asylum seekers are also being held in jails across the country.

Today, the ACLU and its partners, the Center for Gender and Refugee Studies, Human Rights First, and Covington & Burling LLP, filed a class action lawsuit challenging the Trump administration’s pattern of illegally locking up immigrants who are seeking asylum in the United States. The plaintiffs are fleeing persecution, torture, or death in their countries of origin. Like Damus, they all followed procedure and presented themselves at the border to apply for asylum, were screened by a government official, and found to have a credible asylum claim that should be heard in court. Instead of offering a humane response, the Trump administration has locked them up indefinitely while their cases are adjudicated.

The arbitrary imprisonment of people like Damus is part of the administration’s larger strategy of deterring immigrants from seeking refuge in the U.S. even though our laws permit them to. This same cruel and abusive deterrence strategy underlies tactics like brutally separating parents from their children, and criminally prosecuting individuals who cross the border to seek asylum.

The administration’s detention of asylum seekers is not only cruel and wasteful. It violates the Constitution, breaks U.S. immigration laws and international law, and goes against the Department of Homeland Security’s written policy.

The Fifth Amendment prohibits the government from depriving any person, regardless of citizenship, of their liberty without due process of law. Due process requires a valid reason for putting a person behind bars, and it also requires that meaningful procedures are in place to make sure detention actually serves those goals. The Constitution does not permit the government to take people’s liberty away arbitrarily, regardless of whether the Trump administration wants to send a message that asylum seekers “need not apply.”

Moreover, immigration laws require the government to consider the facts in each case to determine if the individual is a flight risk or a danger to public safety before it detains that person. Similarly, international law prohibits the use of detention to deter asylum seekers from pursuing their claims, without an individualized determination that detention is justified because the person is a danger or flight risk. But the administration is jailing asylum seekers without providing them a meaningful opportunity to show that they don’t need to be locked up in the first place.

Finally, the indiscriminate detention of asylum seekers violates the Department of Homeland Security’s own policies. In 2009, the Obama administration issued a directive instructing ICE Field Offices to grant release on humanitarian parole to asylum seekers, provided that they met a series of stringent requirements: pass their credible fear screening (an interview in which an immigration official determines whether there’s a “significant possibility” the person is eligible for asylum); prove their identity; pose no danger to the community; and provide an address where they will be living and commit to appearing for court dates.

This directive is still in place. Yet in practice, people are being illegally detained for months on end, even though they met the directive’s requirements.

Ansly Damus, for example, poses no danger to anyone and has strong claims for protection under our laws. He is an ethics teacher from Grand-Rivière-du-Nord in Haiti and was forced to flee Haiti because of political persecution by “La Meezorequin,” known as the Shark Bones Army, an armed gang that supported a local official, Benjamin Ocenjac. In one of his seminars, he cited Ocenjac as an example of a politician who had used gangs to terrorize the population. As retribution, members of La Meezorequin attacked Damus while he was riding home on his motorcycle, beat him, set his motorcycle on fire, and threatened to kill him. Fearing for his life, he fled Haiti 10 days later.

In October 2016, Damus traveled to the border at Calexico, California, presented himself to the immigration authorities, and requested asylum. After interviewing him, an asylum officer verified that he had a credible asylum claim and referred him for a hearing before an immigration judge. The judge then granted him asylum twice. But because the government appealed each asylum grant, he’s been locked up ever since in a detention facility in Chardon, Ohio, where detainees are kept in windowless rooms. “I have not breathed fresh air or felt the sun on my face,” he says, “and I never know if it is cold or hot outside, if the sun is out, and if the seasons are changing.”

Immigrants like Ansly Damus are exactly the people the directive was designed to protect, yet the Trump administration is ignoring it entirely. Donald Trump may want to keep immigrants out of America, but he is not above the law or the Constitution as he pursues his inhumane agenda.