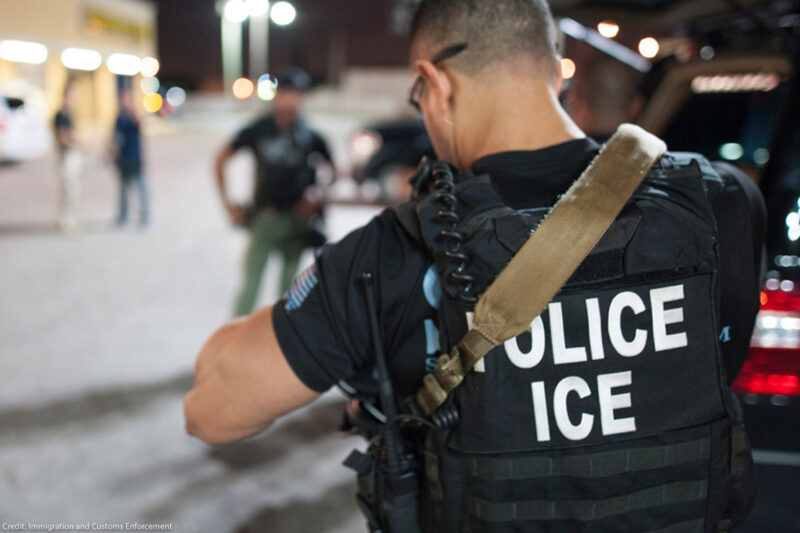 A new ACLU report on the 287(g) program’s harmful partnerships with local sheriffs reveals racist abuses and no accountability.

In 2017, Gerardo Martinez-Morales was driving to the doctor’s office when he was pulled over by sheriff’s deputies in Galveston County, Tex.. One week later, the father of four and grandfather of three who lived in the U.S. for more than two decades was deported to Mexico. The reason given for the traffic stop that caused him to be torn from his family of U.S. citizens? A broken taillight.

Under Immigration and Customs Enforcement’s (ICE) 287(g) program, such travesties are all too common. The 287(g) program — named after a section of the 1996 Immigration and Nationality Act — sounds wonky, but is relatively simple and terribly life-altering in practice: It allows local law enforcement agencies, primarily sheriffs, to carry out certain duties normally reserved for federal ICE agents, such as investigating a person’s immigration status and holding people for transfer to ICE detention. The result is that even the most minor of interactions with local law enforcement can lead to detention, deportation, and separation from their families.

In this new ACLU report, research reveals that racial profiling, poor jail conditions and other civil rights violations are widespread among the 142 state and local law enforcement agencies ICE describes as participants in the 287(g) program as of April 2022.

In a new research report, the ACLU found that dozens of sheriff partners in the 287(g) program have records of racism, abuse, and violence. Our analysis reveals that the majority of local partners have documented incidents of civil rights violations and other abuses. Our report makes clear that xenophobia is at the very heart of the program, which expanded five-fold under the anti-immigrant efforts of the Trump administration.

President Biden has continued to partner with sheriffs who entered into agreements with the Trump administration, despite promising to end them, and even though these partnerships undermine his administration’s stated priorities for criminal justice reform and immigrants’ rights.

While 287(g) is intended to be narrow in scope and proponents portray it as oriented towards deporting “criminals,” in practice, many sheriffs and their deputies wield their federally-delegated authorities quite widely. For years, immigrant rights activists have documented racial profiling endemic to the program: Sheriff’s deputies look for any excuse to detain somebody they suspect of having a questionable immigration status for the purposes of funneling them into deportation.

Would Gerardo Martinez-Morales have been arrested for a “broken taillight” if he weren’t brown-skinned in an overwhelmingly white county policed by a sheriff who had pursued a 287(g) agreement and spoken publicly about the need to punish undocumented immigrants? Would the sheriff have pursued a 287(g) agreement in the first place if he weren’t on a mission to target immigrants?

After all, joining the program is voluntary under federal law and comes at local taxpayer expense with no measurable benefits. Studies suggest 287(g) undermines both public safety and public health as trust in local agencies plummets and fear rises. To better understand why a sheriff would still pursue a 287(g) agreement, it helps to look at the history of the program.

Nearly two-thirds of 287(g) partners have records of racial profiling and other civil rights abuses.

When Obama’s presidency ended, there were 34 remaining 287(g) agreements nationwide following several racial profiling investigations by the Department of Justice, including one that led to the termination of the 287(g) agreement in Alamance County, North Carolina. The Alamance County sheriff demanded deputies “bring me some Mexicans.” This led to incidents like that of a Latinx man who was arrested and later deported for “providing the wrong address for the crime scene” after he suffered a gunshot wound, or a Latinx women whose three young children were left alone for eight hours on the side of the highway at night after she was arrested and then deported for driving without a license.

Under the Trump administration, the program grew nearly five-fold in a few short years, reaching an all-time high of 152 participating agencies. Among the new agreements was one with the same sheriff in Alamance County.

This is no coincidence. Our investigation shows that the Trump administration actively recruited sheriffs to join the 287(g) program as part of the administration’s larger anti-immigrant agenda, and at the expense of civil rights.

As the ACLU report makes clear, xenophobia and rights abuses run rampant in the program. We find that 59 percent of 287(g) sheriffs have records of anti-immigrant rhetoric, and over half have expressly advocated inhumane federal immigration policies, in some cases while vowing to disobey any federal directives they disagree with. Nearly two-thirds of 287(g) partners have records of racial profiling and other civil rights abuses, while more than three-quarters operate detention facilities with documented patterns of abuse and inhumane conditions.

With a record this abysmal, there is no salvaging 287(g). As a candidate, President Biden pledged to “aggressively limit” 287(g), including by terminating all agreements entered under the Trump administration. But over a year into his administration, he has only ended one agreement.

Will President Biden make good on this promise to disentangle federal immigration enforcement from the everyday work of local law enforcement officers? Or will he continue to work with the very officials who perpetrate abuses, target immigrant communities, and undermine civil rights? The 287(g) program is a broken, racist relic of the past; it must be ended.