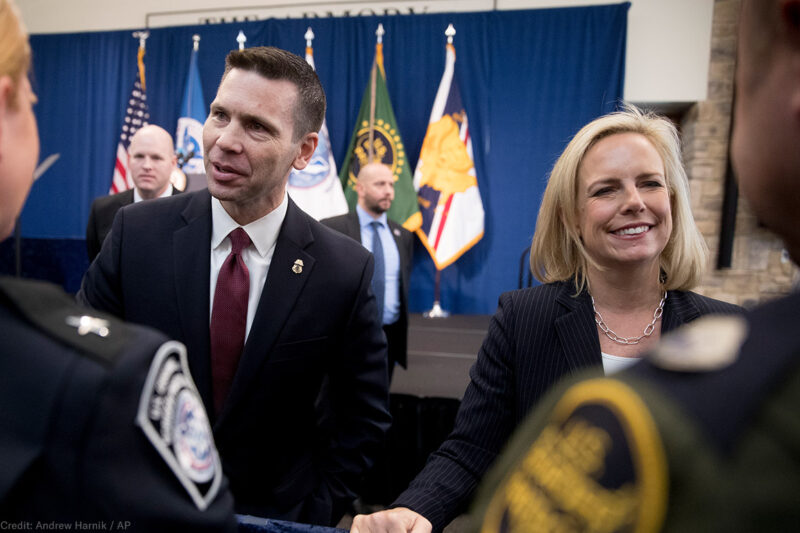 Late yesterday, President Trump announced that Kirstjen Nielsen has resigned as the Secretary of the Department of Homeland Security (DHS). Trump said that Kevin McAleenan, the commissioner of U.S. Customs and Border Protection (CBP), will serve as Acting Secretary.

Nielsen’s tenure as head of one of the country’s largest government agencies was a humanitarian catastrophe, consistently showing a clear disregard for civil rights and people’s lives. Indeed, just over a week prior to her resignation, CBP agents forced asylum-seekers to sleep outside beneath a bridge in El Paso in extremely low temperatures and deprived of medical care.

The most infamous chapter in Nielsen’s time at DHS was her implementation of an unfathomably cruel family separation policy. The administration tore thousands of children from their parents — without even keeping track of many of the families it separated — in an effort to punish and deter families who were lawfully seeking asylum in the United States. McAleenan, Nielsen’s acting replacement, signed a memo recommending the policy.

Nielsen’s imposition of the family separation policy was a humanitarian and legal disaster that was ultimately curtailed by an ACLU lawsuit and immense public outcry. But even after the administration formally ended the policy, Nielsen continued to shamelessly lie about it, going so far as to deny that the policy ever existed. Sen. Jeff Merkley (D-Ore.) asked the FBI to investigate whether Nielsen committed perjury when she testified to Congress that “we’ve never had a policy for family separation.”

A DHS inspector general report found that the department failed to track the children they separated from their parents, and DHS used information from the Department of Health and Human Services (HHS) to arrest and deport sponsors and potential sponsors of the detained children. And yet, the separation of families at the border continues.

The detention and separation of families was part of a broad attack on asylum-seekers and immigrants generally under Nielsen.

She presided over a huge expansion in immigration detention. The number of people in DHS custody skyrocketed during her tenure, reaching 50,000 on average per day in March. Since the department’s detention spending soared past the already bloated-budget approved by Congress, DHS had to funnel dollars from other agencies, including FEMA funds meant for disaster relief, in order to cover the costs of jailing immigrants in facilities notorious for substandard medical care, abusive practices, and violations of people’s constitutional rights.

Restricted asylum and protections for immigrants

She attempted to curtail asylum protections in numerous unlawful ways. For example, she ordered that people who had entered the country in between official points of entry were not eligible for asylum, even though United States law provides precisely the opposite. In November, the ACLU and partners won an initial ruling preventing the asylum ban from going into effect.

She also terminated Temporary Protected Status for people from El Salvador, Honduras, and Nepal and failed to redesignate TPS for those from Somalia, Syria, and Yemen, despite the fact that violence and natural disasters have displaced tens of thousands of people in their home countries. While she was serving in the administration but prior to her time as DHS Secretary, Trump also announced the termination of TPS for people from Haiti, Nicaragua, and Sudan. The ACLU of Southern California and partners obtained a ruling in October blocking the termination of TPS for El Salvador, Haiti, Nicaragua, and Sudan, citing “serious questions as to whether a discriminatory purpose was a motivating factor” in their decisions.

After Trump reportedly made racist comments regarding immigrants from El Salvador, Haiti, and African nations, and instead wanted to prioritize immigrants from Norway, Nielsen denied to Congress that the president used the word, but explained that he “was using tough language.” She also denied that his remarks were racist, bizarrely insisting that she herself didn’t know that Norway was a predominantly white country.

Nielsen also was in charge of implementing Trump’s Muslim ban — she was confirmed to her post one day after the Supreme Court allowed the third version of the ban to take full effect — and served as Chief of Staff to former DHS Secretary John Kelly during the implementation of the first and second versions of the Muslim ban.

Nielsen also championed the attempt to end Deferred Action for Childhood Arrivals (DACA), issuing a memo purporting to justify the administration’s decision to end the program, which provides protections for certain young immigrants, but was rebuffed by a federal court.

When Trump shut down the government for weeks in order to secure billions of more dollars to build his border wall, Nielsen was consistently at his side and parroting his false talking points. Even before the shutdown, Nielsen helped build Trump’s wall by waiving federal, state, local, and tribal laws and undermining border communities in order to accelerate its construction, and afterwards championed the president’s bogus “national emergency” declaration to build the wall, an unconstitutional order that the ACLU has challenged in court. The border wall would increase the number of deaths among migrants as they are “funneled” to harsher domains.

Along the border, the number of warrantless searches of electronic devices, such as cellphones and laptops, by CBP agents increased under the Trump administration. While Nielsen did not start the policy of warrantless searches, she defended DHS’s practices that violate people’s Fourth Amendment rights — practices that the ACLU, together with the Electronic Frontier Foundation — is challenging in a groundbreaking lawsuit. Under Nielsen’s leadership, social media “vetting” expanded dramatically, despite concerns about unfairly targeting Muslim immigrants and immigrants from Muslim-majority countries, and expanding to all immigrant and nonimmigrant visa applicants.

Nielsen’s disastrous and unlawful policies could fill a book, and this is only a summary of some of her most egregious actions, which extend to tear-gassing toddlers and being in charge while two children died in Border Patrol custody.

Her resignation comes only days after Trump withdrew his nominee to lead Immigration and Customs Enforcement (ICE), saying that he wants “tougher” people to carry out his anti-immigrant policies. Seeing as Nielsen was one of Trump’s most brutal cabinet secretaries, this does not bode well for the president’s permanent replacement.

All in all, Nielsen’s legacy as an apologist and enabler of Trump’s detention and deportation machine will go down in history as one of the crucial — and cruel — moments of this presidency.