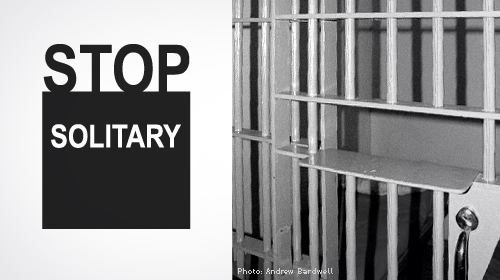 Earlier this week, U.S. Immigrations and Customs Enforcement (ICE) released a new directive regulating the use of solitary confinement in immigration detention. This is a welcome and much-needed step toward curtailing a practice that is both inhumane and horrifyingly common.

Solitary confinement is the practice of placing a person in physical and social isolation for 22 to 24 hours a day with little or no human contact – generally in a small cell with a solid steel door, a bunk, a toilet and a sink – day in, day out. Every day, some 80,000 people across the United States are locked in solitary confinement in our prisons, jails, and immigration detention facilities. Extended stays in solitary confinement can drive people insane, and those who already have mental disabilities often deteriorate further in solitary – engaging in acts of self-mutilation and even suicide. Additionally, solitary is used all too often as a way to “protect” incarcerated victims of rape from others – with often tragic consequences.

Just like in the larger criminal justice system, the jails and jail-like facilities that ICE uses to detain immigrants put too many people in solitary, for too long. According to data reported in the New York Times, on any given day, more than 300 immigrants are held in solitary in just the 50 largest immigration detention facilities – and nearly half of those are isolated for 15 days or more. The United Nations Special Rapporteur on Torture has described solitary confinement of 15 days or more as amounting to torture, because of the risk of permanent psychological harm from such extended isolation.

The new directive also takes important steps to impose substantive limits on the use of solitary. For example, it requires centralized review of all decisions to place detainees in solitary confinement for more than 14 days at a time, including an evaluation of whether any less-restrictive option could be used instead of solitary. It requires heightened justifications to place vulnerable detainees – such as victims of sexual assault, people with medical or mental illnesses, and people at risk of suicide – in solitary confinement. It requires medically and mentally ill detainees to be removed from solitary if they are deteriorating. It requires attorney notification in certain circumstances. And it requires regular reviews of all longer detentions in solitary.

These steps do not bring ICE’s practices fully in line with UN guidance, and fall short of the solitary confinement standards that the Senate passed earlier this summer in its comprehensive immigration reform bill. Most significantly, the directive does not set specific limits on the duration of solitary confinement – even for those vulnerable populations most likely to be permanently harmed by long periods of enforced isolation. Nevertheless, it is a major step forward, and the ACLU will closely monitor ICE’s implementation of the new directive across the immigration detention system in the coming months.