No, Mr. President. You Can’t Change the Constitution by Executive Order 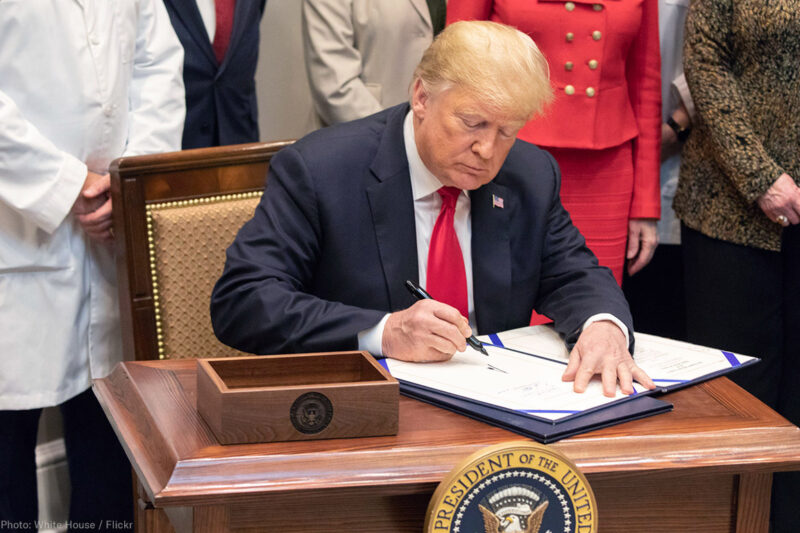 President Trump said this week that he is preparing an executive order to try to take away the citizenship guarantee in the 14th Amendment to the Constitution, which says that people born in the United States are United States citizens. On Tuesday, Sen. Lindsey Graham announced that he would introduce legislation with the same aim.

But the president cannot repeal part of the Constitution by executive order. And Congress cannot repeal it by simply passing a new bill. Amending the Constitution would require a two-thirds vote in both the House and Senate, and also ratification by three-quarters of the states. The effort to erase the citizenship guarantee will never clear those hurdles — for very good reasons.

Birthright citizenship is one of the bedrocks of this country. More than 150 years ago, the 14th Amendment guaranteed to all those born within the United States citizenship, without regard to parentage, skin color, or ethnicity. And the Supreme Court ruled, more than 100 years ago, that the citizenship guarantee applies fully to U.S.-born children whose parents have no right to citizenship.

Before the amendment was enacted, American citizenship was controlled by the abhorrent 1857 Supreme Court decision Dred Scott v. Sandford. In that case, the justices found that Black people born in the United States were not citizens, but rather a “subordinate and inferior class of beings” with “no rights or privileges but such as those who held the power and the Government might choose to grant them.” Neither slaves, nor freed slaves, nor their descendants could ever become citizens, the justices ruled.

After the Civil War, Congress overruled Dred Scott by passing the 14th Amendment. The definition of citizenship is part of its very first sentence: “All persons born or naturalized in the United States, and subject to the jurisdiction thereof, are citizens of the United States and of the state wherein they reside.” In one sweep, the clause guaranteed citizenship to previously enslaved people and their children — and ensured that the law would never again perpetuate a multigenerational, permanent underclass of individuals barred from American citizenship.

In 1898, the Supreme Court confirmed that the 14th Amendment guaranteed citizenship to all children born on U.S. soil, no matter what their parents’ status. In United States v. Wong Kim Ark, the justices found that a baby born in San Francisco to parents who were citizens of China — and subject to the Chinese Exclusion Act, which prohibited them from becoming U.S. citizens themselves — was automatically a citizen at birth. The court specifically rejected the argument that a child in those circumstances was not “subject to the jurisdiction” of the United States, and thus excluded from the Constitution’s citizenship guarantee.

Only a few categories of people are excluded: children of foreign diplomats, children of enemy soldiers present in the U.S. during an occupation, and children of Native American tribes, who have American citizenship under a separate provision of law.

At least since 1898, there has been no serious question about whether children born in the United States can be denied American citizenship because of the status of their parents. James C. Ho, who was recently appointed by President Trump to the Court of Appeals of the Fifth Circuit, has written that citizenship “is protected no less for children of undocumented persons than for descendants of Mayflower passengers.” Similarly, Walter Dellinger, who was assistant attorney general in the Clinton administration, told Congress in 1995 that legislation to nullify birthright citizenship was “unquestionably unconstitutional.”

Of course, Dellinger acknowledged, “Congress is free to propose, and the states to ratify, any amendment to the Constitution. Such naked power undeniably exists.” Yet the Constitution stands for certain enduring principles, as he said in testimony before the House. “For us, for our nation, the simple, objective, bright-line fact of birth on American soil is fundamental.”