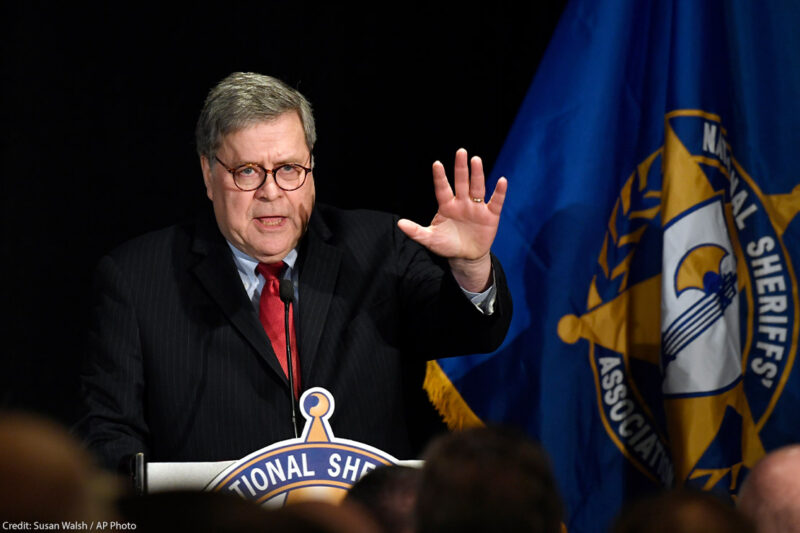 Communities should protect immigrants rather than serve Trump’s agenda.

Attorney General Bill Barr, speaking at the National Sheriffs’ Association conference in Washington, D.C., encouraged sheriffs to join the Trump administration as it launches a “significant escalation” in the federal government’s efforts to retaliate against cities and states with policies designed to protect immigrant communities.

For Barr’s Department of Justice, that escalation includes new lawsuits against states and municipalities with immigrant-protective policies. He also promised to “meticulously review the actions of certain district attorneys” who are charging individuals with lesser offenses to avoid triggering their deportation. He said they are “systematically violating the rule of law,” which is ironic, given his decision this week to overrule career prosecutors and recommend a reduced sentence for President Trump’s ally Roger Stone.

This comes just as the Department of Homeland Security (DHS) suspended Global Entry for all New Yorkers as retribution for allowing undocumented residents to apply for driver’s licenses and preventing data-sharing with federal immigration enforcement agencies. The Department is also looking to punish privacy-protecting states that don’t give it unfettered access to state-held databases it can use to track immigrants.

Making the speech at a convening of county sheriffs was no accident: Barr’s speech is just the latest way the Trump administration has ratcheted up the pressure on sheriffs to collaborate with Immigration and Customs Enforcement (ICE).

Already, whenever local law enforcement arrest and book an individual into jail, they submit their name and fingerprints to the FBI, which shares the information with ICE. That evidently isn’t enough for Barr, who wants sheriffs to volunteer to perform the federal government’s job and do the administration’s bidding.

Barr wants sheriffs to help fuel the deportation pipeline by holding people in jail based on ICE requests. But that can violate the Fourth Amendment —and local governments have been forced to pay money damages for unlawfully jailing someone under an improper ICE detainer.

One of the most pernicious forms of ICE-sheriff collaboration is known as 287(g), a voluntary agreement between law enforcement agencies and DHS to deputize some local officers as federal immigration agents. These programs can give deputies the power to screen and interrogate immigrants about their status, access ICE databases, arrest people over suspected immigration violations, and start deportation proceedings.

One study found that fewer Latinx residents reported crimes in Frederick County, Maryland after their county sheriff entered a 287(g) agreement. Another survey of immigrants in San Diego County, California showed a huge uptick in the number of people who said they would be unwilling to report crimes they were the victims of or witnessed when told the sheriff’s office worked with ICE.

In 2018, voters in North Carolina’s two largest counties voted out their two sheriffs who had 287(g) programs, and the newly elected sheriffs cited concerns about community trust and safety as reasons to terminate the agreements.

While Barr wants to pressure sheriffs to join his administration’s detention and deportation machine, people can demand better from their sheriff.

In the majority of states, the sheriff is an elected position. Voters can urge candidates to come out against 287(g) and similar policies of collaboration, and press their sheriff to terminate any existing agreements. It’s also vital that voters reach out to their state representatives and local officials and urge them to support measures that protect immigrant communities and keep local resources focused on local needs, not the Trump administration’s detention and deportation agenda.

State and local governments have the power to reject Trump and Barr’s anti-immigrant pressure campaign — and continue efforts to protect both public safety and civil rights.