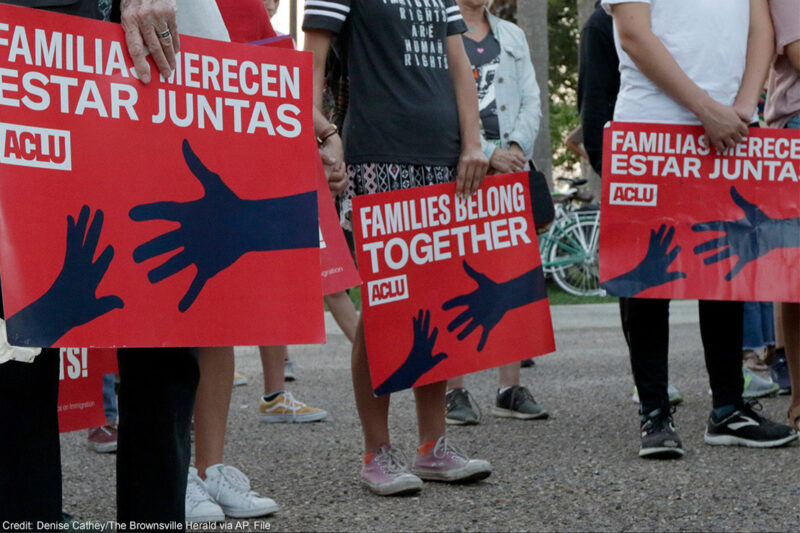 The Biden administration is inheriting tremendous challenges. But addressing family separation should be a no-brainer.

In 2018, the ACLU brought a successful lawsuit, Ms. L. v. ICE, against the Trump administration’s barbaric practice of forcibly separating migrant families. At the time, we had no idea of the scale and depravity of the injustice, but now know that thousands of children were deliberately ripped from their parents, including toddlers and babies.

Last fall, we reported that hundreds of these families had still not been located, triggering a promise by President-elect Joe Biden to create a task force to address family separation — a promise that materialized with the creation of Biden’s Task Force on the Reunification of Families.

As the Biden administration marks its 100th day in office, the Task Force must quickly address the family separation tragedy it inherited, and ensure these abuses never happen again.

Understandably, many are asking why hundreds of families remain missing after so many years and what has happened to the thousands of other families who were located.

The reason so many families have not been located is because the Trump administration withheld their names and then failed to disclose information that could have helped us find them. While an ACLU-convened steering committee (consisting of the Paul Weiss law firm, KIND, WRC, and Justice in Motion) has nonetheless managed to find most of the families even with this limited information, the parents of roughly 400 children have not yet been located. Thousands more continue to suffer trauma and continued separation.

That is why, beyond any additional assistance the Biden administration can give us to find the still-missing families, it must do four things.

First, it must permit deported families to reunite in the United States. Many mistakenly assume that only the missing 400-plus remain separated. But the Trump administration deported hundreds of other parents without their children (often telling the parent that their child would meet them on the plane only to have the plane take off without the child). We have found many of these still-separated families, but the Trump administration gave them only two brutal choices: remain separated from their children or bring their children back to the very danger they fled in the first place. The Biden administration has the power to immediately “parole” these families into the United States, allowing them to reunite in safety here.

Third, the Biden task force must provide damages and also create a fund to provide basic necessities, including trauma-informed care for both the children and parents. Without this help, these families stand little chance. As the American Academy of Pediatrics has concluded, the Trump administration engaged in “child abuse” that has caused lasting trauma. Physicians for Human Rights has gone further and called it torture.

Finally, the task force must ensure there are no more family separations so we do not repeat this tragedy.

The Biden administration has inherited tremendous challenges. But addressing family separation should be a no-brainer. In 2018, when the country learned that babies and toddlers were being ripped from their parents’ arms, the public revulsion spanned the ideological spectrum. The sentiment was uniform: Our government should not take babies from their parents and use them as political pawns.

Ultimately, it is a moral imperative to eliminate the historic stain on this country. I have been doing this work at the ACLU for nearly 30 years and have never seen a more inhumane practice or one that received such widespread, swift, and unequivocal condemnation. I still worry, though, that all the talk of aggregate statistics and abstract policy prescriptions will blur the human dimension, and the fact that the trauma caused to each of these children by family separation is its own tragic story.

I hope the Biden administration will remember stories like that of one of the first reunited families in our case, whose mother told us that her 4-year-old son kept asking if they were going to take him away again. Or the little boy with glasses whose mother said that he was unable to get his glasses case before he was taken away screaming, and that she worried every day whether the government would get him a new pair if they broke.

Or the parents who knew their children would be taken and asked, but were denied, the opportunity for a moment to brace the children for what was about to happen. Or the mother who was forced to watch as agents drove away with her 18-month-old baby while the baby craned his neck to get one last glimpse of her. Or all the other mothers and fathers who were not even told where their children had been taken or given the chance even to say goodbye, left only to wave through a glass window.

For the sake of these families, the Biden administration must repair the harms inflicted by family separation and ensure such an atrocity never happens again.

This post was updated on April 29, 2021 to reflect the current situation, 100 days into the Biden administration.