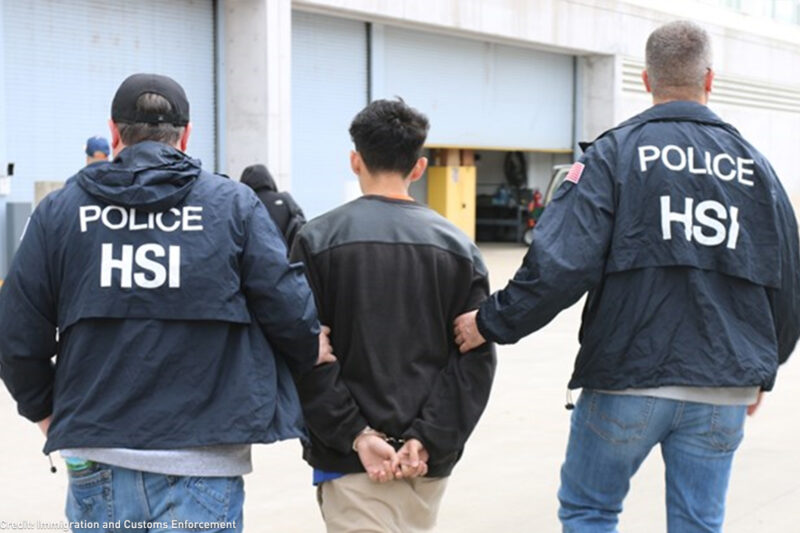 Update: In an order issued on November 20th, a federal district court in California required that the teenagers be given notice of the reasons for their arrests, access to the evidence being offered against them, and a prompt hearing in front of a judge, in which the government would have the burden to justify their detention.

Wearing a blue soccer jersey with “El Salvador” written on it. Doodling an area code from home on a school notebook. Law enforcement agencies have used both of these as “evidence” that a teenage immigrant high school student belongs to a dangerous gang. And both have triggered a process that results in the teenager’s detention in prison-like facilities far from his or her family and home.

In the government’s latest effort to be tough on immigration, federal immigration agents are picking up teenagers in what appears to be a coordinated effort to detain anyone whom they suspect of gang affiliation — regardless of whether they have any real evidence to back that up.

The pattern works this way: Local police pick up an immigrant juvenile based on a relatively minor incident or suspicion that they belong to a gang. The police can’t produce enough evidence to support the charges, or the charges are only minor infractions that don’t demand any jail time. But instead of closing the case, the police notify Immigration and Customs Enforcement. ICE takes custody of the teenager and sends them to the Office of Refugee Resettlement, the federal agency with a division in charge of caring for unaccompanied immigrant children.

So what do ORR officials do?

In testimony in the case of A.H., one of the children involved in our class action suit, an ORR official admitted that the agency had conducted no meaningful review to examine ICE’s “evidence” to justify the child’s jailing. They did not contact the child’s parents or attorneys to notify them of the child’s whereabouts.They held no hearing over their decision to incarcerate the child. Instead, within hours of receiving an email from ICE, with unsubstantiated evidence of gang affiliation, ORR decided to send the child to a secure detention facility across the country.

Meanwhile, after the arrest, the parents of these kids are left in a panic, going days without any information about what happened to their children. Lawyers scramble to find out where the kids are, only to discover too late that they’ve been transported cross-country. The teenagers are denied access to their lawyers and the evidence against them. Meanwhile, they languish in detention. All of this violates a 2008 law that addresses the rights of unaccompanied children, as well as the Flores decree, a longstanding court order that set national standards concerning the treatment of children in immigration detention.

The teenagers in our case came to the United States as unaccompanied children and were placed in custody of ORR, which released them to their family members in the U.S. Since then, they have attended their immigration court hearings and were on the pathway to obtaining lawful immigration status. Now the government is using mere accusations to sweep them back into custody and block their applications for lawful status and put their lives in the U.S. in jeopardy.

One such teenager, F.E.,* was repeatedly harassed by local police officers. They accused him of being a gang member based on scribbles in his notebook and acquaintances at school. He was then picked up by ICE agents, bounced around prison-like facilities in New York, Virginia, California, and back again to New York, all based on unproven allegations of gang affiliation.

F.E.’s story is not unique. We know of multiple juveniles arrested and swept into immigration custody based on similarly flimsy “evidence” of gang membership, like showing pride in their home countries, or being seen with certain people or in certain locations.

To make matters worse, the Suffolk County, New York, police department — where we first heard of cases like F.E.’s — is openly collaborating with ICE to target juveniles when they don’t have enough evidence to keep a child in criminal custody.

In June, the ACLU of Northern California filed suit in the San Francisco federal district court on behalf of one Long Island teenager who was arrested by ICE and whisked across the country within days, without any notice to his family or lawyers. On Friday, the ACLU of Northern California, the ACLU Immigrants’ Rights Project, and the firm of Cooley LLP, working in a pro bono capacity, expanded the case into a class action lawsuit with two additional children — including F.E. — as lead plaintiffs.

Of course, we should address gang violence in our communities. But while trying to appear tough on gangs, the government is tearing children from their families and depriving them of their most fundamental constitutional rights. All children deserve the right to understand why they are being detained and a process to contest their detention before they are taken hundreds or thousands of miles away from their families.

The government’s treatment of juveniles like F.E. is wrong. It violates our Constitution and laws. And we will fight to stop it.