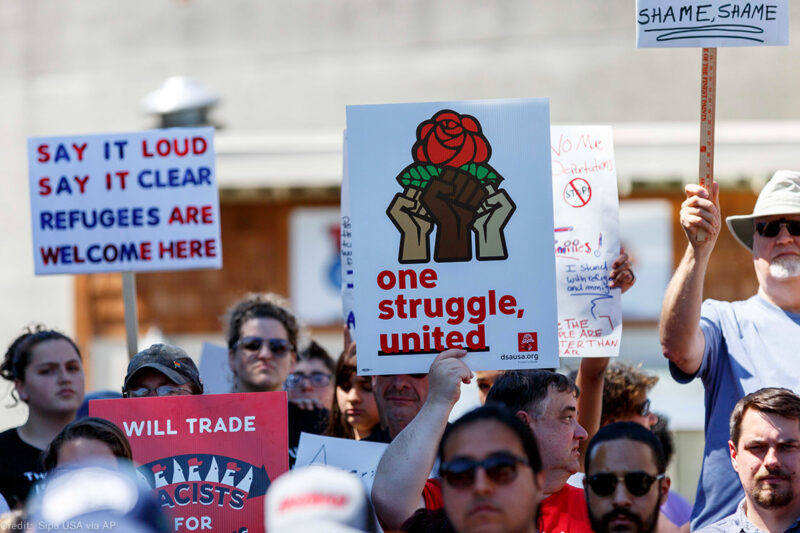 This week, President Trump kicked off his re-election campaign by tweeting a threat to deport millions of immigrants, apparently referring to his administration’s plans for mass raids on families across the country. Meanwhile, news continues to break about what his administration is already doing, as dizzying as it is horrifying: A six-year-old girl dying in the Arizona desert on the way to seek asylum, a premature baby languishing at a border holding site, a trans woman dying from pneumonia after asking to be deported rather than remain in Immigration and Customs Enforcement (ICE) detention without proper medical care.

What’s remarkable is that in the midst of the extreme rhetoric and reality, people across the country are finding common ground on immigration. In at least seven states, grassroots activists have quietly built coalitions necessary to enact pro-immigrant rights laws, many of which will limit the Trump administration’s ability to carry out its threats to deport millions.

One of the standouts is the Keep Washington Working Act, which will affect nearly one million Washingtonians — one in every seven people in the state — who are immigrants. It bars local law enforcement from acting as an arm of ICE — routinely questioning individuals about immigration status, notifying ICE that a noncitizen is in custody, and detaining someone for the purpose of facilitating their deportation. This law — and a variety of laws and policies that more than 400 counties have adopted since Trump came to office — make it harder for ICE to detain and deport people at the levels President Trump is threatening, since ICE relies on local law enforcement for the vast majority of its arrests.

Although Washington’s new law is among the most protective we’ve seen, it is far from alone. This summer, Colorado enacted a law that prohibits state and local law enforcement from honoring detainers, which are ICE’s written requests to hold people an extra 48 hours after their release date so that ICE can decide whether to detain them. And Connecticut’s governor just signed into law a measure to strengthen the state’s Trust Act, which is designed to protect due process rights of immigrants by requiring a judicial order to detain an individual for ICE.

Illinois’ governor is expected to sign the Keep Illinois Families Together Act, prohibiting state and local law enforcement from acting as ICE deputies through 287(g) agreements, which have a history of leading to racial profiling against Latinx communities. llinois’ legislature also extended the state’s effective ban on for-profit prisons to include ICE private prisons. Oregon’s legislature passed a bill that will make it safer for immigrants to participate in court proceedings by prohibiting judges from asking defendants to disclose their immigration status.

One reason these laws are passing is that coalitions have brought together unlikely allies: the big employers in each state. For some industries, protecting these workers is a matter of necessity: an estimated 70 percent of hired workers in the agriculture industry are immigrants. It is 50 percent in the dairy industry. And the tourism industry, from ski slopes to Disney World, relies on immigrant labor. Employers worry that ICE’s indiscriminate targeting of immigrant communities will force immigrants into the shadows and out of the state. Expect other states to follow Washington’s lead in passing pro-immigrant laws — through coalitions of local industries and community activists.

Immigrant rights victories are also building on the strength of the criminal justice reform movement. This spring, Utah, Colorado, and New York enacted so-called 364-day measures, joining several states. These measures reduce the maximum jail sentence for misdemeanor offenses by one day, from 365 to 364 days. That protects immigrants from serious consequences imposed by federal immigration law that kicks in when the maximum possible sentence for an offense is 365 days or more— even if the person’s actual sentence is just a few days. Those consequences include detention, deportation, and loss of opportunity for individuals to adjust their immigration status. These reform measures ensure that convictions for minor offenses like shoplifting don’t carry devastating immigration consequences.

There is, of course, a serious backlash against these measures. Local politicians are taking their cues from President Trump. Florida Governor Rick DeSantis campaigned on and just signed into law a purported ban on “sanctuary cities,” over the opposition of business leaders and the Miami police chief, and even though there are no “sanctuary cities” in Florida. The North Carolina legislature is debating HB 370, which would force local law enforcement to do ICE’s bidding, even though sheriffs from the state’s biggest cities have spoken out against it.

Nevertheless, the wave of pro-immigrant legislation in the states — and the recent passage in the House of Representatives of the American Dream and Promise Act — represents a powerful cross-current to the Trump administration’s increasingly anti-immigrant rhetoric and policy.

And they show that presidential candidates have a clear mandate from voters. That’s why, as part of the ACLU’s Rights for All campaign, volunteers are asking presidential candidates to commit to an overhaul of our immigration system. We need a fair and achievable path to citizenship for people who are undocumented, far fewer people languishing in immigration detention, and an end to ICE’s reliance on state and local law enforcement to facilitate deportations. Many communities and state governments support immigrant rights — and they are enacting changes a new president should build on in 2021.