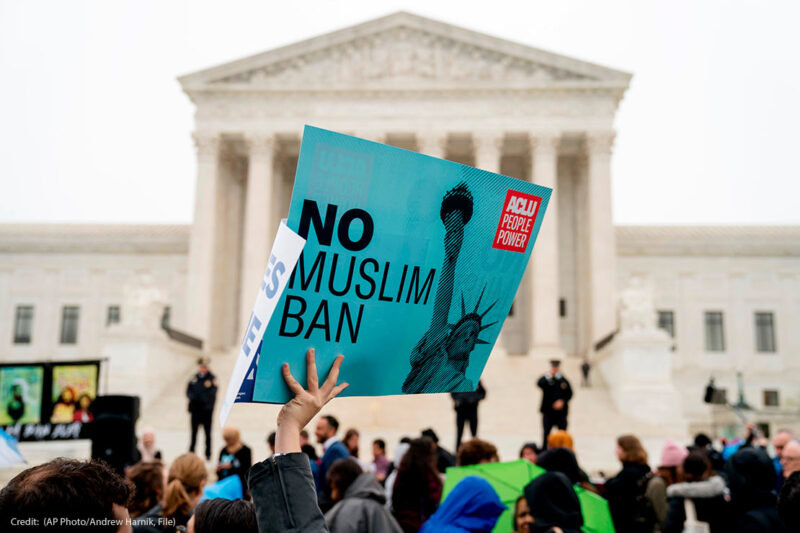 With the NO BAN Act, Congress has the opportunity to right the administration’s, and the Supreme Court’s, wrong, and prevent Trump from harming more communities.

Kirsten finally found true happiness — she met her best friend, soulmate, and other half. In 2014, they decided to marry and began the arduous immigration process. They were three years into the process when President Trump announced the Muslim Ban, throwing their future into disarray. In 2020, their daughter Alexandria is now a toddler. She knows her father best from video conversations. Their dreams are slipping away with the harsh reality that under Trump’s Muslim Ban, they may never be together in the United States. Kirsten was one of many who shared how the ban affects their lives — families separated, weddings postponed, and lives uprooted.

As Kirsten said, “As an American citizen, I should have the right to ‘pursue happiness,’ as stated in our Constitution.” Kirsten draws the poignant parallel to the infamous 1944 Supreme Court decision in Korematsu v. United States, which upheld Executive Order 9066, banishing Japanese people, including U.S. citizens, from their homes and forcing them into prison camps. As Kirsten noted, “Thoughts of Korematsu loudly resonate, as my husband is being discriminated against based on his origin. The lessons of Korematsu were taught in classrooms not for just educational purposes, but so as to not let history repeat itself.”

Thousands echo her fears: “I am [a] U.S. resident and haven’t seen my spouse for 15 months. We need help,” Farshad said.

“I was born and raised in the U.S. and I am very heartbroken to be discriminated against and separated from my soulmate just for a mere visa that is delayed due to discriminatory policies, I really hope this nightmare is over soon so my wife and I can start our family here in the United States,” Ali shared.

Trump’s ban reaches beyond the United States’ borders and across the world. Three years ago, fulfilling an abhorrent campaign promise, Trump announced his first Muslim Ban within days of assuming the Oval Office. Immediately, nationwide outrage followed, as people of all walks of life rushed to the airports and to the courts. Courts rejected that first version as well as the order the administration crafted to replace it. Finally, those temporary measures were replaced by the current proclamation, which likewise bans millions of people — the majority of whom are Muslim.

The Supreme Court allowed the proclamation, which bans most people from Iran, Libya, Somalia, Syria, and Yemen (and a small number of North Koreans and Venezuelans), to go into full effect in December 2017. In June 2018, the Supreme Court issued an opinion allowing it to continue in effect while litigation continues. As Justice Sotomayor cogently explained, the majority could reach this conclusion only by “ignoring the facts, misconstruing our legal precedent, and turning a blind eye to the pain and suffering the Proclamation inflicts upon countless families and individuals.”

This ruling is one that will go down in history as one of the Supreme Court’s greatest failures — one that repeats the mistakes of the Korematsu ruling by allowing the administration’s mere mention of national security to excuse the even the most blatant and shocking discrimination. And since the Supreme Court ruling, the Trump administration has issued more bans on asylum-seekers and certain people who cannot prove they will be able to obtain health care.

Now, Trump plans to expand the Muslim ban even further.

This is why Congress must pass the NO BAN Act. Speaker Pelosi has already announced that this bill will be moving forward. It is essential that it move forward in its current form and put an end to this list of abuses and allow families like Kirsten’s to be together and for fathers to meet their children.

The proposed legislation would:

With the NO BAN Act, Congress has the opportunity to right the administration’s, and the Supreme Court’s, wrong, and prevent Trump from harming more communities. Congress must act to end this discrimination, allow families to be together, and to halt the President’s broad overreaches of power.