Undocumented and Seeking Safety During a Natural Disaster 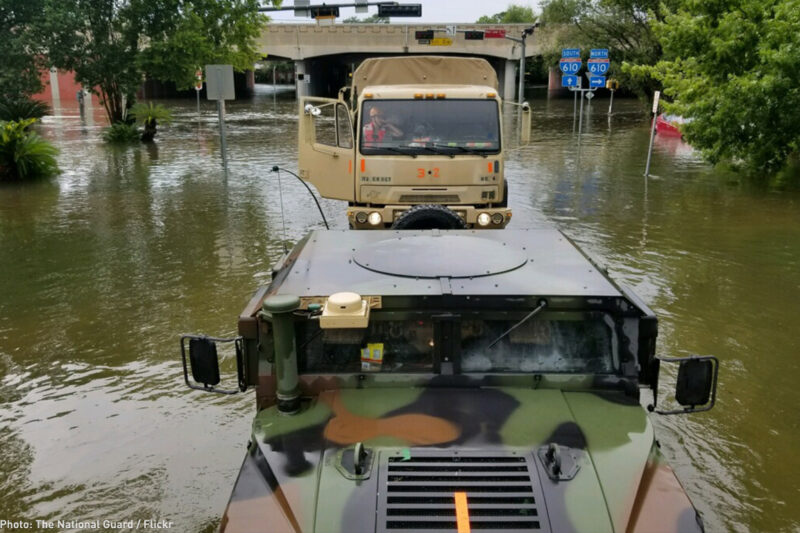 Hurricane Harvey has already resulted in at least 10 deaths and dozens of injuries. Unfortunately, immediate relief is not in sight for Texas residents. As individuals, families, and entire communities prepare to assess the catastrophic damage this storm has wrought on lives, homes, and livelihoods, it is critically important that the federal government’s immigration agenda does not put more people at risk.

Regardless of their immigration status, the people of Texas are in the midst of a serious and dangerous natural disaster. Immigration and Customs Enforcement (ICE) and Customs and Border Protection (CBP) should have put public safety first from the beginning. Yet, they have not been sufficiently transparent about their enforcement operations during Hurricane Harvey, so that undocumented Texans and mixed status families can make informed decisions about their safety.

This has been done successfully and compassionately before. In 2012 and 2016, in advance of Hurricane Isaac and Hurricane Matthew, the Department of Homeland Security, on behalf of ICE and CBP, affirmed that the agencies’ highest priorities were to promote “life-saving and life-sustaining activities.” ICE and CBP followed that directive, stating that “there will be no immigration enforcement initiatives associated with evacuations or sheltering” related to either storm, “including the use of checkpoints for immigration enforcement purposes in impacted areas during an evacuation.”

Border Patrol agents operate immigration checkpoints within 100 miles of U.S. borders, meaning that many Texas residents regularly encounter them in the interior of the state. It only stands to reason that families who are undocumented or of mixed status go to great lengths to avoid passing through a checkpoint. In previous years, ICE and CBP suspended immigration enforcement during natural disasters, presumably aware that undocumented residents might very well risk remaining in a disaster zone rather than risk deportation.

When it comes to Hurricane Harvey, priorities seem to have shifted and the results could be deadly.

On Thursday August 24, the Border Patrol for Rio Grande Valley Sector released a statement saying that “Border Patrol checkpoints will not be closed unless there is a danger to the safety of traveling public and our agents.” Given the confusion on the ground about the need to evacuate, this was a dangerous message to send to families attempting to make safety plans at a time when the hurricane’s path was unpredictable. It was certainly at odds with the tweet from Gov. Greg Abbott on the same day, calling on the public to “Heed the warnings. Don’t risk your lives.”

By announcing that checkpoints would be open north of the Rio Grande Valley, CBP put families in the excruciating position of choosing between safety and the possibility of being detained. As the hurricane’s path became clearer, the Lower Rio Grande Valley, which is located south of two checkpoints, turned out to be the safest place to be. But given the uncertainty and viciousness of this storm, the outcome could have been quite different.

Concerns were further compounded by the news that ICE agents who had 50 immigrants in their custody, the majority of whom are asylum seekers, left them stranded at a bus station in San Antonio without verifying their safety.

On Friday, the Department of Homeland Security released a joint statement from ICE and CBP, which notably did not say that agencies would halt immigration enforcement during evacuations or sheltering operations as it had in previous years. Instead, it noted that, “routine non-criminal immigration enforcement operations will not be conducted at evacuation sites, or assistance centers such as shelters or food banks.”

The Trump administration has wrongly asserted that being undocumented in the United States is itself criminal activity. It is not — and the Supreme Court has made that clear. This statement has already caused fear on the ground with some undocumented residents and families avoiding shelters altogether.

What’s more, many are worried that Senate Bill 4, Texas’ anti-immigrant law scheduled to go into effect on Sept. 1, will make matters far worse. Unless it is stopped by the federal courts, the measure will force state and local police to enforce federal immigration orders and require that jail administrators meet all requests from ICE officers to hold inmates for possible deportation.

On Monday, Mayor Sylvester Turner of Houston sought to reassure residents who may fear asking for help from law enforcement during the storm because of SB4, pledging that he himself would represent any people who are detained. The city of Houston pushed back on rumors that people would be asked for immigration status or papers at city shelters.

The ACLU is currently fighting to stop SB4 in court before it can take effect and the city of Houston is one of many Texas cities that have joined in the suit.

We do not know how many lives Hurricane Harvey will ultimately claim or how bad the damage will be. We do know, however, that countless families are facing extraordinary danger. As of Monday, Border Patrol began to participate in rescue efforts in Houston. The Department of Homeland Security should continue on this path and issue a clear, unequivocal statement which affirms that the right to safety is not based on immigration status.