Your Rights in the Border Zone 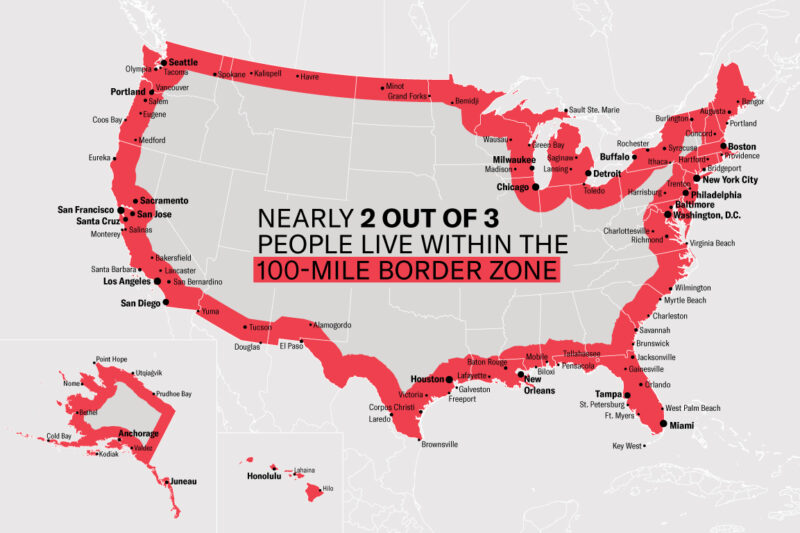 On Jan. 19, two Border Patrol agents boarded a Greyhound bus at a Fort Lauderdale station and proceeded to question passengers row by row. The bus, traveling from Orlando to Miami, had not crossed any international borders. Despite its domestic route, the agents interrogated passengers, ultimately detaining a Jamaican national who, Border Patrol claims, had overstayed her tourist visa. This story is not an isolated occurrence, and the practice is hardly new. However, a recent uptick in this type of immigration operation — from New York to Florida — has caused fear among travelers and immigrant communities. It has also raised important questions about the scope of immigration officials’ authority and the rights one has in these encounters.

Are immigration officials allowed to stop people in places wholly inside the U.S.?

U.S. Customs and Border Protection, the federal agency tasked with patrolling the U.S. border and areas that function like a border, claims a territorial reach much larger than you might imagine. A federal law says that, without a warrant, CBP can board vehicles and vessels and search for people without immigration documentation “within a reasonable distance from any external boundary of the United States.” These “external boundaries” include international land borders but also the entire U.S. coastline.

What is a “reasonable distance”?

The federal government defines a “reasonable distance” as 100 air miles from any external boundary of the U.S. So, combining this federal regulation and the federal law regarding warrantless vehicle searches, CBP claims authority to board a bus or train without a warrant anywhere within this 100-mile zone. Two-thirds of the U.S. population, or about 200 million people, reside within this expanded border region, according to the 2010 census. Most of the 10 largest cities in the U.S., such as New York City, Los Angeles, and Chicago, fall in this region. Some states, like Florida, lie entirely within this border band so their entire populations are impacted.

Are there limitations to immigration officials’ power?

The Fourth Amendment to the U.S. Constitution protects against arbitrary searches and seizures of people and their property, even in this expanded border area. Furthermore, as a general matter, these agents’ jurisdiction extends only to immigration violations and federal crimes. And, depending on where you are in this area and how long an agent detains you, agents must have varying levels of suspicion to hold you.

We will examine specific scenarios where one might encounter CBP in more depth, but here are your key rights. These apply to every situation, outside of customs and ports of entry.

Other important factors to keep in mind:

How Does This Work in Real Life?
CBP on Buses and Trains

As part of its immigration enforcement efforts, CBP boards buses and trains in the 100-mile border region either at the station or while the bus is on its journey. More than one officer usually boards the bus, and they will ask passengers questions about their immigration status, ask passengers to show them immigration documents, or both. These questions should be brief and related to verifying one’s lawful presence in the U.S. Although these situations are scary, and it may seem that CBP agents are giving you an order when they ask you questions, you are not required to answer and can simply say you do not wish to do so. As always, you have the right to remain silent.

Refusing to answer CBP’s questions may result in the agent persisting with questioning. If this occurs, you should ask if you are being detained. Another way to ask this is to say, “am I free to leave?” If the agent wishes to actually detain you — in other words, you are not free to leave — the agent needs at least reasonable suspicion that you committed an immigration violation to do so. Also, if an agent begins to question you about nonimmigration matters, say to ask about drug smuggling, or if they haul you off the bus, they need at least reasonable suspicion that you committed an offense in order to briefly detain you while they investigate. You can ask an agent for their basis for detaining you, and they should tell you.

As before, when you are at a checkpoint, you can remain silent, inform the agent that you decline to answer their questions or tell the agent you will only answer questions in the presence of an attorney. Refusing to answer the agent’s question will likely result in being further detained for questioning, being referred to secondary inspection, or both. If an agent extends the stop to ask questions unrelated to immigration enforcement or extends the stop for a prolonged period to ask about immigration status, the agent needs at least reasonable suspicion that you committed an immigration offense or violated federal law for their actions to be lawful. If you are held at the checkpoint for more than brief questioning, you can ask the agent if you are free to leave. If they say no, they need reasonable suspicion to continue holding you. You can ask an agent for their basis for reasonable suspicion, and they should tell you. If an agent arrests you, detains you for a protracted period or searches your belongings or the spaces of your vehicle that are not in plain view of the officer, the agent needs probable cause that you committed an immigration offense or that you violated federal law. You can ask the agent to tell you their basis for probable cause. They should inform you.

CBP conducts yet another interior enforcement activity: roving patrols. During these patrols, CBP drives around the interior of the U.S. pulling motorists over. For these operations, the Supreme Court requires CBP to have reasonable suspicion that the driver or passengers in the car they pulled over committed an immigration violation or a federal crime. If they do pull you over, an agent’s questions should be limited to the suspicion they had for pulling you over and the agents should not prolong the stop for questioning unrelated to the purpose of the stop. Any arrest or prolonged stop requires probable cause. You may ask the agent their basis for probable cause, and they should tell you. In this situation, both the driver and any passengers have the right to remain silent and not answer questions about their immigration status.

Encounters with CBP, or any law enforcement agent, can be intimidating and scary. It is always best to stay calm and be courteous when dealing with immigration officials. If you believe your rights have been violated, you should contact an attorney.