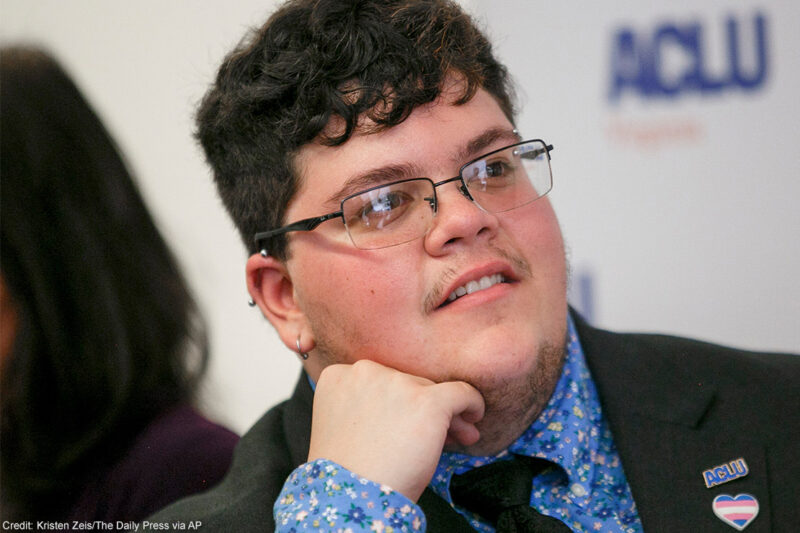 Yet another federal appeals court has ruled that transgender students are protected from discrimination.

The decision comes after a five-year long court battle that began when the American Civil Liberties Union and ACLU of Virginia filed a sex discrimination lawsuit against the Gloucester Country School Board for adopting a discriminatory policy requiring Grimm and other transgender students to use “alternative private” restrooms.

Here are four highlights from the decision today:

“Grimm’s four years of high school were shaped by his fight to use the restroom that matched his consistent and persistent gender identity. In the face of adults who misgendered him and called him names, he spoke with conviction at school Board meetings. The solution was apparent: allow Grimm to use the boys’ restrooms, as he had been doing without incident. But instead, the Board implemented a policy that … sent him to special bathrooms that might as well have said ‘Gavin’ on the sign. It did so while increasing privacy in the boys’ bathrooms, after which its own deposition witness could not cite a remaining privacy concern. We are left without doubt that the Board acted to protect cisgender boys from Gavin’s mere presence — a special kind of discrimination against a child that he will no doubt carry with him for life.”

“The proudest moments of the federal judiciary are when we affirm the burgeoning values of our bright youth, rather than preserve the prejudices of the past. …  How shallow a promise of equal protection that would not protect Grim from the fantastical fears and unfounded prejudices of his adult community. It is time to move forward. The district court’s judgment is Affirmed.”

“Th[is] is indistinguishable from the sort of separate-but-equal treatment that is anathema under our jurisprudence. No less than the recent historical practice of segregating Black and white restrooms, schools, and other public accommodations, the unequal treatment enabled by the Board’s policy produces a vicious and ineradicable stigma. The result is to deeply and indelibly scar the most vulnerable among us — children who simply wish to be treated as equals at one of the most fraught developmental moments in their lives — by labeling them as unfit for equal participation in our society. And for what gain? The Board has persisted in offering hypothetical and pretextual concerns that have failed to manifest, either in this case or in myriad others like it across our nation. I am left to conclude that the policy instead discriminates against transgender students out of a bare dislike or fear of those ‘others’ who are all too often marginalized in our society for the mere fact that they are different. As such, the policy grossly offends the Constitution’s basic guarantee of equal protection under the law.

“I see little distinction between the message sent to Black children denied equal treatment in education under the doctrine of ‘separate but equal’ and transgender children relegated to the ‘alternative appropriate private facilit[ies]’ provided for by the Board’s policy. The import is the same: ‘the affirmation that the very being of a people is inferior.’ (Martin Luther King, Jr.)”

Today’s ruling follows a recent decision from the Supreme Court that it is illegal to fire someone for being LGBTQ. The ACLU argued in the case of Aimee Stephens that federal civil rights laws that prohibit sex discrimination protect LGBTQ people. Today the court once again ruled that Title IX, which also prohibits sex discrimination, applies to transgender students.

While the summer has brought legal wins for the LGBTQ community, the fight is not over. In 2020, over 200 anti-LGBTQ laws were active in state legislatures, including dozens targeting transgender youth. The ACLU and its partners fought many of those and won, and will continue to fight for transgender youth across America.

This Fourth Circuit opinion holding that it violated Title IX and the EPC to bar Gavin Grimm from the boys' restroom because he is trans is so excellent. @JoshABlock and @GavinGrimmVA built this connected to the legacy of so much critical work. aclu.org/sites/default/… 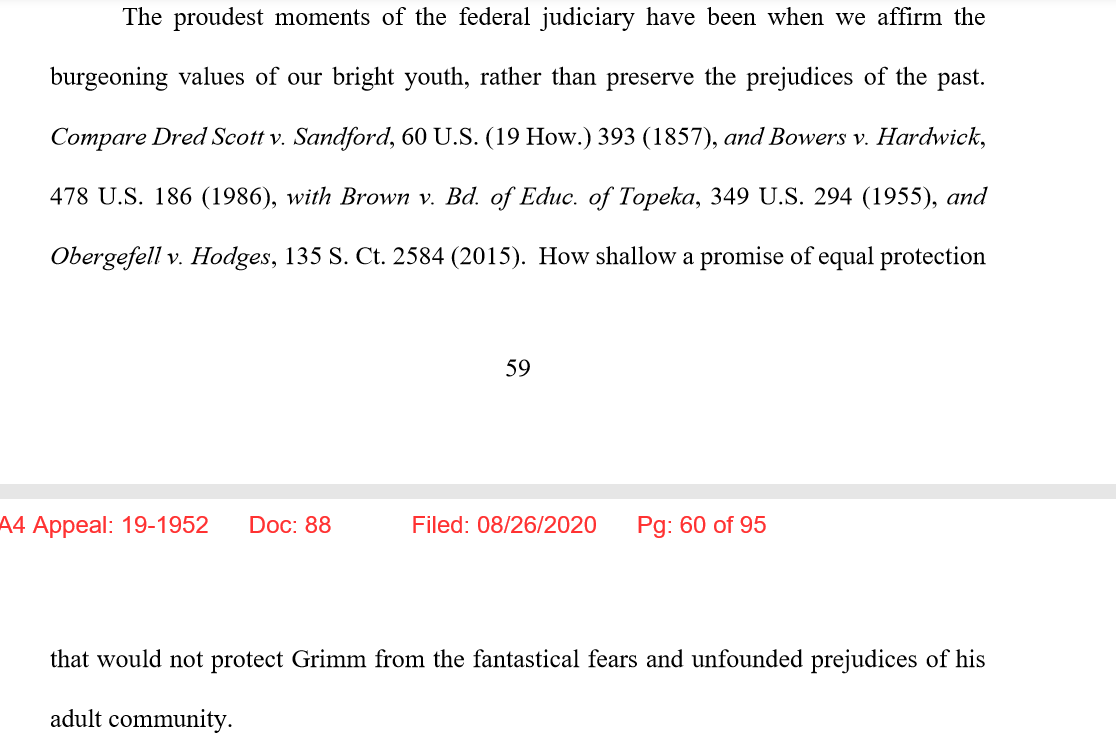