CeCe is Free But So Much Work Remains 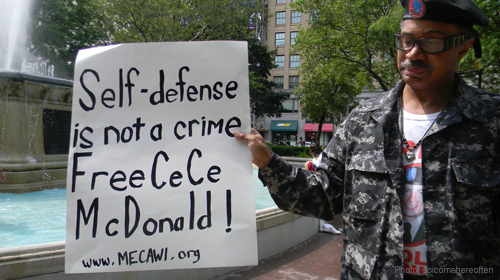 According to the Minnesota Department of Corrections website, CeCe McDonald is expected to be released today from the Minnesota men’s prison where she has served 19 months of her 41 month sentence stemming from her controversial manslaughter conviction.

CeCe McDonald, now 25, is a Black, transgender woman who was walking with friends in Minneapolis on the evening of June 4, 2011. On their way to a grocery store, CeCe and her friends passed a group of white men and women outside a local tavern. According to witnesses, the group began to yell racist and transphobic remarks at CeCe. The confrontation escalated and CeCe was sliced in the face with a broken beer bottle and Dean Schmitz, one of the white patrons of the tavern, was killed. Even though CeCe and her supporters maintained that Schmitz was killed in an act of self-defense, CeCe was the only person arrested at the scene and charged with two counts of 2nd degree murder by the Hennepin County District Attorney’s Office. Facing up to 40 years in prison, on May 2, 2012, CeCe accepted a plea to Manslaughter in the Second Degree and was later sentenced to 41 months in prison. Today she will be released.

Since her arrest, CeCe’s story has attracted worldwide attention. From the organized Free CeCe campaign launched just days after her arrest to the recent announcement by Laverne Cox about a documentary she’s producing about CeCe’s story, CeCe has become an icon in the trans community. But throughout the case, CeCe herself has urged supporters not “to launch long-term campaigns on her behalf that exceptionalize her situation.”

Sadly, the story of LGBT people of color facing criminal charges for defending themselves from violence is a common one. In 2006, seven Black lesbian-identified women were arrested following an altercation with a man who harassed and assaulted them on the street in New York City. Four of the women, later known as the New Jersey Four, were convicted of assault and sentenced to prison. Currently, Jewlyes Gutierrez, a young, transgender girl of color is facing battery charges stemming from a fight at school after she was repeatedly harassed and bullied by her peers. Charles Ramsey, the President of the Contra Costa School District where Jewlyes is a high school student, expressed concern over the District Attorney’s decision: “It doesn’t seem to be fair. You’re prosecuting a victim here? It seems like this is really a school issue. They took care of it at the school site.” Meanwhile, reports of violence against transgender people and LGBT people of color have continued to rise. The National Coalition of Anti-Violence Programs documented at least 14 homicides of transgender women in 2013 and reported that for 2012, over 50 percent of LGBT and HIV-related homicide victims were Black and over 50 percent were transgender (all trans women).

Today, CeCe will be released, Jewlyes will still face battery charges in California, and many other transgender women of color will risk violence every time they leave their homes. Still others will remain in prison to fight for adequate health care, their release from solitary confinement and an end to the endemic physical and sexual violence that transgender individuals face in confinement settings. As we welcome CeCe home, we continue the vital work of ending mass incarceration, ensuring that transgender people in prison receive medically necessary healthcare and that prisons and jails end the practice of placing vulnerable populations in solitary confinement.