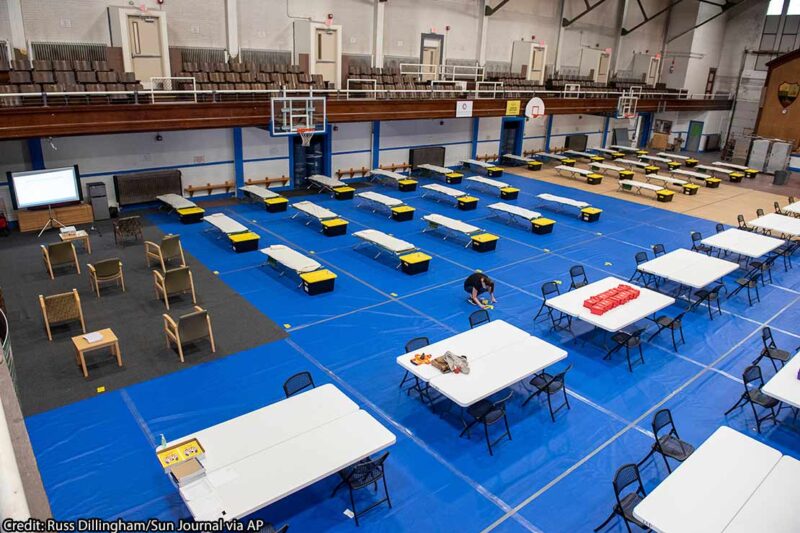 LGBTQ people already get turned away from food banks, shelters and more. The high court's decision in Fulton could make things worse.

The Supreme Court will soon hear oral arguments in Fulton v. City of Philadelphia, a case about whether governments can be forced to give taxpayer funding to faith-based organizations that provide government services in ways that discriminate against LGBTQ people.

If that sentence took you a minute to unravel, and then you couldn’t quite believe you read it right — well, you’re not alone. But unfortunately, it’s true.

The Fulton case, which will be heard on Nov. 4, involves the foster care system. Catholic Social Services had a contract from Philadelphia to provide services to foster youth, including screening foster parents. When the city learned CSS insisted on following its own religious screening criteria — which rejected same-sex couples as foster parents — the city didn’t renew its contract. CSS then sued the city.

In a similar case, a Protestant organization contracted to provide these services declined to place foster youth with foster parents who were not Protestants, and specifically discriminated against Jewish and Catholic families. Child welfare experts agree that these types of policies lead to more foster youth spending more time in group homes, because the agencies are turning away eligible foster parents.

But the implications of the case go far beyond the foster care system. Local, state, and federal governments often give taxpayer dollars to private agencies to provide government services. Many of these private agencies are faith-based. For example, the U.S. State Department contracts with nine organizations to provide resettlement services to refugees, including housing. Six of the nine are faith-based, and five of those six are Christian. Faith-based organizations have government contracts to provide everything from public assistance to substance use treatment, from childcare to shelters. Many of these faith-based organizations do not discriminate and follow best practices in their field to put the needs of those receiving their services first. And that’s how it should be.

In the past, the Supreme Court has said that governments can’t deny an organization funding just because the organization is religious. But our opponents in Fulton want something much more than the ability to compete for government funding on equal footing with secular organizations. They want a right for religious organizations to receive government funding to provide government services, even if they selectively refuse to provide those services and discriminate in violation of contract terms and the law. This isn’t religious liberty. It’s government-funded discrimination against the most vulnerable in our society, excused because some want to impose their religious beliefs on others.

If the Supreme Court agrees with Catholic Social Services, it is the people who are most marginalized who will suffer.

Middle class and wealthy people for the most part get to choose whether and how to engage with faith-based organizations. Working class and poor people do not. The possibilities for harm are sweeping, and there would be no clear stopping point. If you stop by your local church on your way home from work to apply for food stamps, they might stop processing your application as soon as they learn you are pregnant and unmarried. If you are a transgender woman with no housing and no place to stay, you could be turned away from a federally-funded homeless shelter run by a faith-based organization. You could end up sleeping on the street in the freezing cold because of who you are.

If you were told you had to complete a drug treatment program funded by the state government to avoid jail time, that program could insist that you embrace Christianity to complete it. You might not be allowed to bring your kids to a taxpayer-funded daycare center because you have a partner who is the same sex as you or a different religion than you. If you are a high school student interested in an after-school program paid for by your local government, you could be rejected because you are Mormon or bisexual.

These same communities are under attack in many other ways. For example, the Trump administration recently proposed a regulation designed to allow federally-funded homeless shelters to turn people away because they are transgender, or because they don’t match sex stereotypes. If this proposal were to become law, it would embolden life-threatening discrimination against some of the most vulnerable people in the nation, and lead to more early deaths of trans people.

The wrong decision in Fulton could do the same. And because a ruling in Fulton would be based on the constitution, Congress would not be able to fix it. But that’s not a reason to give up — it’s a reason to fight harder for our communities in every way we can, both before the court’s decision and after. We must insist that the court not bend the constitution to force the government to withhold services from some of the most vulnerable in our communities. We must fight for the economic security of LGBTQ people, whether that is through passing the Equality Act, decriminalizing sex work, or providing emergency COVID-19 rent relief. And we must fight for genuine religious liberty for all.