Legislators Across the Country Set Their Sights on Transgender People 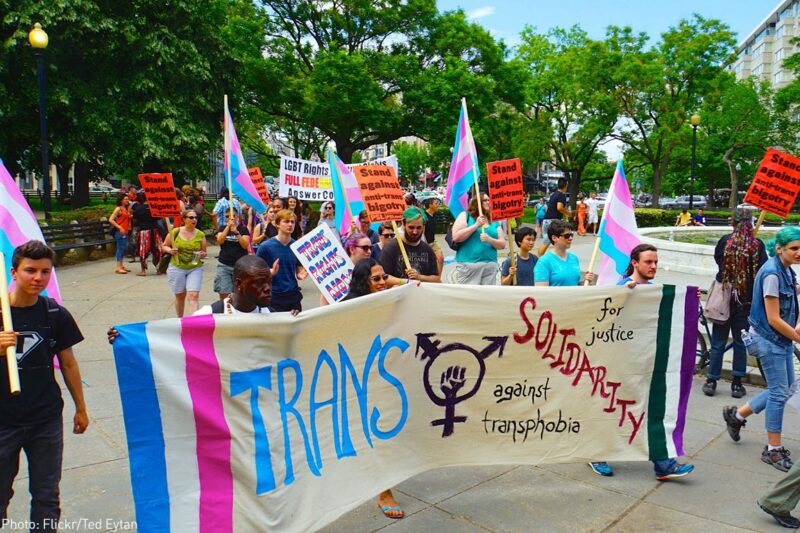 After last year became the most violent in history toward the transgender community, 2016 is off to an inauspicious start with anti-trans rhetoric heating up in the states.

Bills are being introduced in state legislatures, from Washington state to Virginia (and everywhere in-between), aimed at dehumanizing and discriminating against LGBT people. In many, transgender people bear the brunt of the most extreme proposals.

In Virginia, for example, we are witnessing the most anti-LGBT legislative session in the state’s history. So far, 9 anti-gay and anti-trans bills have been introduced. Some of the bills reveal a fixation with determining the “anatomical sex” of students to ensure that trans students are expelled from communal bathrooms. One goes so far as to impose a $50 civil penalty on any student who uses the “wrong” bathroom. Others seek to prevent trans people from updating their Virginia birth records to match their gender and limit nondiscrimination protections based on sex to people whose gender matches the gender assigned to them at birth.

Another bill that the Virginia legislature will be considering next week would allow individuals and corporations to discriminate based on, among other things, a sincerely held religious belief or moral conviction that the terms “man” and “woman” only refer to “an individual’s immutable biological sex as objectively determined by anatomy and genetics of the individual at the time of birth.”

And as bad as things are in Virginia, it’s not alone. Across the country legislators will consider bills that would authorize countless forms of discrimination against transgender people.

Next week in South Dakota, legislators will consider a bill to force transgender students in public schools across the state into separate restroom and locker room facilities.

Indiana has taken the discrimination a step further, proposing a bill that would fine transgender people up to $1,000 and sentence them to up to a year in jail for using the bathroom or locker room that corresponds to their gender.

These proposed measures have and will continue to devastate the transgender community. While adults in power vote to dehumanize trans young people, suicide, bullying, and abuse continue to decimate the community.

And no matter the distorted rhetoric these legislators hide behind, the message to the transgender community is clear: You are less than human. You are undeserving of protection and dignity. You are not wanted here. As one mother of a transgender girl explained to the New York Daily News: “We g[et] hate calls and threats. … Grandfathers saying they would stand outside the bathroom and teach her to be a man. The principal told me … she could (not) protect my child. It got so bad we had to move.”

But where will people go with so many bills being introduced?

Imagine what it feels like to be a transgender young person in Indiana, Virginia, or countless states across the country. You like studying science and playing soccer with your friends on the weekend. Though self-conscious about the truth you realized at a young age, you started to gain confidence once you began to live as the girl or boy you truly are.

Then all of a sudden you hear that your legislators are calling you a freak. There is a bill pending that would send you back to the girls room and make you pay $50 if you keep using the boys room. There are grown-ups in the community threatening you and your family. Your mom is sad. Your friends start to distance themselves from you. All of a sudden your life seems different. You wonder what, if anything, your future holds. Is this the message we want to be sending trans kids?

Stop the trend of anti-transgender legislation. Don’t let a kid in your community be the next one to take his own life. Join us in telling trans young people that they are beautiful and worthy of support and legal protection.