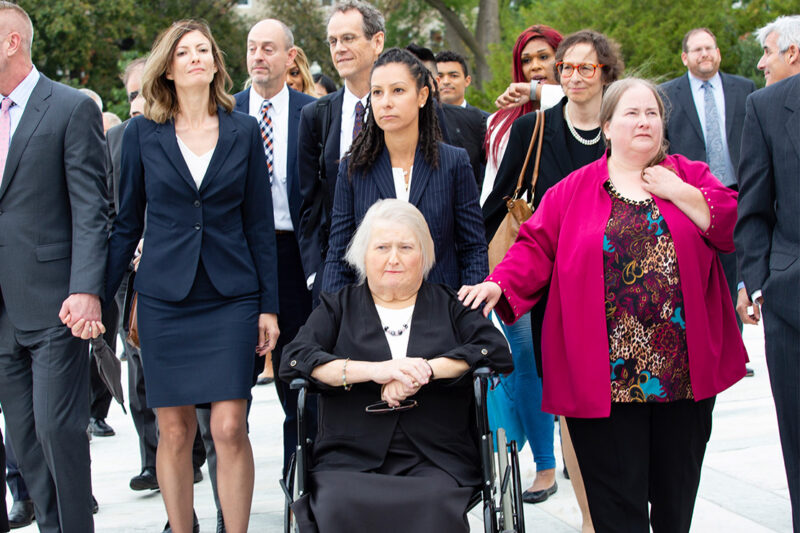 This win is important, but the only way to get comprehensive protections for LGBTQ people is to pass the Equality Act.

In a landmark win for LGBTQ people, the Supreme Court today ruled that firing employees because of their sexual orientation or gender identity is sex discrimination that violates federal law. Today’s decision clarifies for the first time that LGBTQ people are protected from employment discrimination from coast to coast, including in states and cities that have no express protection for LGBTQ people in their own laws.

While this ruling is a groundbreaking advance for LGBTQ people, there are still significant gaps in federal civil rights law that Congress must fill by passing the Equality Act.

Today’s ruling came in three cases raising related issues. Harris Funeral Homes, Inc. v. EEOC and Aimee Stephens, involved Aimee Stephens, who worked for six years as a funeral director at a funeral home in Detroit. Her boss knew her as a man, but Aimee knew since she was little that she was female. After decades of hiding who she really was, Aimee realized she had to come out to the world as her true self or she couldn’t go on living. Gathering enormous courage, Aimee told her co-workers and her boss that she was a woman. Her co-workers didn’t have a problem, but her boss fired her.

Don Zarda was the plaintiff in another of the cases decided today, Altitude Express, Inc. v. Zarda. Don was a sky diver who found his dream job teaching sky diving on Long Island, New York. He loved introducing others to the sport. Don often took customers on tandem jumps, where they are strapped to him shoulder-to-shoulder and hip-to-hip before they jump from the plane. While preparing for a jump, Don told a female customer that he was gay in an effort to make her more comfortable with how close they were physically. He thought nothing of the remark, but his boss later fired him for sharing “inappropriate information” with a customer. Heterosexual people don’t get fired for telling people they’re straight, so Don understood this was discrimination.

The third case was brought by Gerald Bostock, who was fired from his job as a social worker for at-risk youth after his employer learned he was gay.

All three workers sued, asserting that it was sex discrimination to fire them for being gay or transgender. The Supreme Court agreed, holding that “An employer who fires an individual for being homosexual or transgender fires that person for traits or actions it would not have questioned in members of a different sex. Sex plays a necessary and undisguisable role in the decision, exactly what Title VII forbids.”

Indeed, it’s clear that each employee’s sex was central to the reason they were fired. If Don Zarda or Gerald Bostock had been women attracted to men, instead of men attracted to men, they wouldn’t have been fired. And there is no way to understand Harris Funeral Homes’ decision to fire Aimee without talking about her sex and her decision to transition her gender.  What else could this be other than a decision based on her sex?

Tragically, neither Aimee nor Don lived to see the decisions from the Supreme Court in their landmark cases. Aimee died last month from kidney failure that was exacerbated by her loss of health insurance when she was fired because she was transgender. Don died several years ago in a sky-diving accident.

Today is not just a day to celebrate progress for LGBTQ people, it’s a day to thank Aimee, Don, and Gerald for putting themselves forward through these cases in order to help millions of people all across the country. And it’s a day to thank Aimee and Don’s families for continuing their cases in their honor. Without heroes like them, the protections in our legal system would not work.

It’s also a day to tell Congress to finish this work, update the Civil Rights Act, and ensure comprehensive anti-discrimination protections for all of us nationwide.