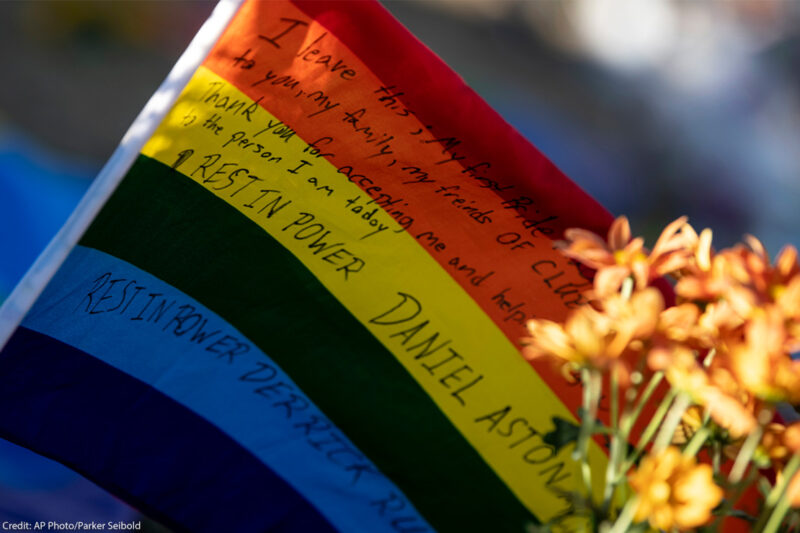 The shooting is a logical extension of politicians’ efforts to deny transgender people our safety, community, and families.

When you talk to transgender people who came of age before the internet, you’ll hear a common refrain: “I thought I was the only one.” The experience of growing up transgender is most often a very lonely one, every childhood memory and familial relationship shaded by the pain of lacking the vocabulary to even ask for help, much less seek it out. Transgender people often grow up with the sullen certainty that no one will ever understand us, a sense of social isolation that, combined with widespread poverty, homelessness, and harassment, can often prove deadly.

All of this makes safe places for transgender people to gather among ourselves of utmost importance to our own survival. Club Q, an LGBTQ nightclub in Colorado Springs where a gunman recently killed five people and injured dozens more, was one of these vital safe-havens. Survivors of the shooting have described it as a rare gathering place for the queer community of the famously conservative small city, and the lives of those lost reveal the immensity of what was taken from them.

Kelly, Daniel, and transgender people across the country are bridges across this enforced silence, helping one another navigate a world that was never built for us.

Kelly Loving was described by her sister as a very giving person, “always trying to help the next person out … she was just a caring person.” A friend of Kelly, also a transgender woman, said, “When I first started to transition, I wasn’t confident at all. She reminded me that you are not doing the wrong thing by being trans, that it was okay to embrace it because you are a beautiful person. Without her giving me the confidence, I don’t know where I would be today.”

Daniel Aston, a 28-year-old transgender man and bartender at Club Q, was similarly described as a keystone of hope for the entire community. “He had friends that would come by the carload just to come and see him bar tend or just to hang out and support,” said a coworker at the club. As Daniel wrote on social media before his death, every time “I have even the slightest thought of leaving Club Q, someone comes up and tells me ‘you’re the reason I love this bar.’”

Daniel and Kelly were far from alone — countless transgender people across the country serve as models of hope, strength, and joy for the people around them. It’s a particular note of tragedy that this shooting happened in the first minutes of Transgender Day of Remembrance, an annual commemoration of transgender people lost to violence — each one of them with the potential to be the kind of pillar for others Daniel and Kelly were.

Across the country, this sense of community and support for transgender people is in peril. Even when not taking the form of violence or the threat of it, politicians are working overtime to further isolate and alienate transgender people from their communities and their families. Whether it’s banning books by or about us, censoring teachers and doctors from sharing the truth of who we are, or even threatening parents who support their own transgender youth, the end goal of these restrictions is denying transgender people the words to describe our experience, the means to express it safely, and the community and support we all deserve.

Violence isn’t often described as a form of censorship, but what are LGBTQ people attacked for if not the way we express ourselves? What is the impact of a shooting at Club Q on transgender people across the country if not instilling a sense of fear in our own ability to live our truth? Kelly, Daniel, and transgender people across the country are bridges across this enforced silence, helping one another navigate a world that was never built for us. While nothing can replace that immense loss, one thing we can do in response is help transgender people know none of us are alone and, in truth, we never were.