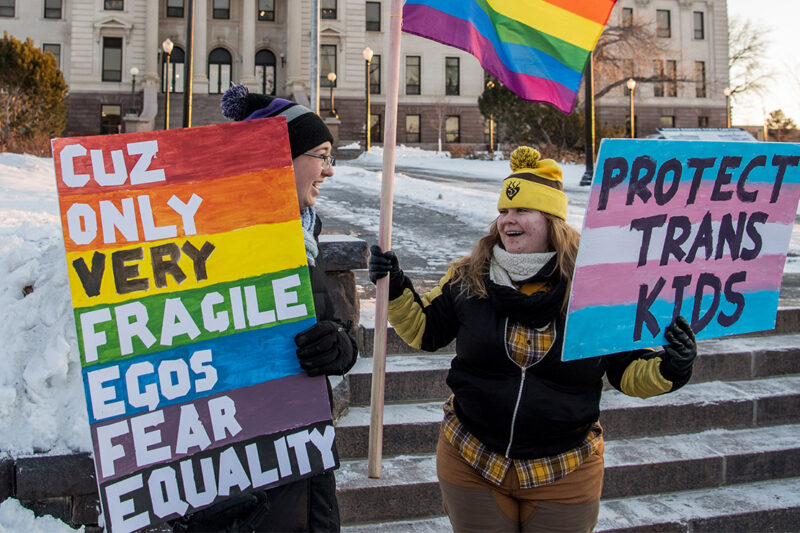 Less than a month and a half into 2020, this state legislative session has seen unprecedented attacks on LGBTQ people, and an alarming focus on bills that would harm trans youth.

Also alarming: These bills, and the terminology used in them, use similar language and clearly come from a common playbook.

Right now, bills are pending in 10 states that would criminalize life-saving, best practice medical care for trans youth, putting government in the way of decisions that should be left up to the young person, their parents, and their medical providers. Proponents of these bills repeat similar lies about medical care, but these bills are opposed by all major medical associations that just want to be sure all kids can get the health care they need.

At the same time, 16 states currently are considering bills that would ban young trans athletes from participating in athletic activities consistent with their gender (bills in Missouri and Idaho have hearings this week). Some of the bills only exclude girls who are trans, echoing language that was once used to keep cisgender women out of sports. Others also require boys who are trans to participate solely on girls’ teams. Statewide scholastic sports organizations typically regulate the terms of participation in sports to ensure all youth can participate fairly. These bills would instead authorize invasive medical examinations of young athletes, and would substitute a categorical exclusion from school sports that doesn’t match up even with the most stringent regulations governing elite competition like the Olympics.

And still, other bills would allow all health care providers to refuse care based on religious objections to trans people, or make it harder for schools to support trans youth.

These bills — and dozens of other anti-LGBTQ measures — are pending in states across the country from Alaska to Florida. That’s not a coincidence. These efforts are part of an orchestrated national campaign led by groups like Heritage Foundation, Alliance Defending Freedom, — who last week filed a lawsuit attacking trans student athletes — and the Family Policy Alliance, to demonize trans youth and drive a wedge among supporters of LGBTQ equality. We can’t let them succeed.

This isn’t theoretical. The South Dakota Health & Human Services Committee voted last week to kill their bill restricting access to health care for trans youth. While a bill to exclude trans kids from sports failed in committee in Alabama on February 13, the sponsor has already scheduled it for another hearing next week. And that same day, a House committee in Arizona just voted to move forward a bill that would bar trans young people from participating in sports. Other legislatures are poised to act soon.

In South Dakota — trans youth, their parents, medical providers, business leaders, and others spoke up and made it clear that these attacks will hurt young people and the state. As is so often the case — the victory in protecting the rights of transgender people belongs to the trans community.

But even when these bills are defeated, the fact young people and their families have to show up over and over before lawmakers and testify to try to stop these attacks is itself harmful. Let’s fight back with these youth and the entire LGBTQ community, and show our young people who are watching – and the orchestrated movement attacking us – that trans kids have fierce allies and we won’t let these bills pass.

Like Zaya Wade said last week, we only get one life. If we can’t be ourselves, how can we live?