Trans Health Care in Florida: What You Need to Know 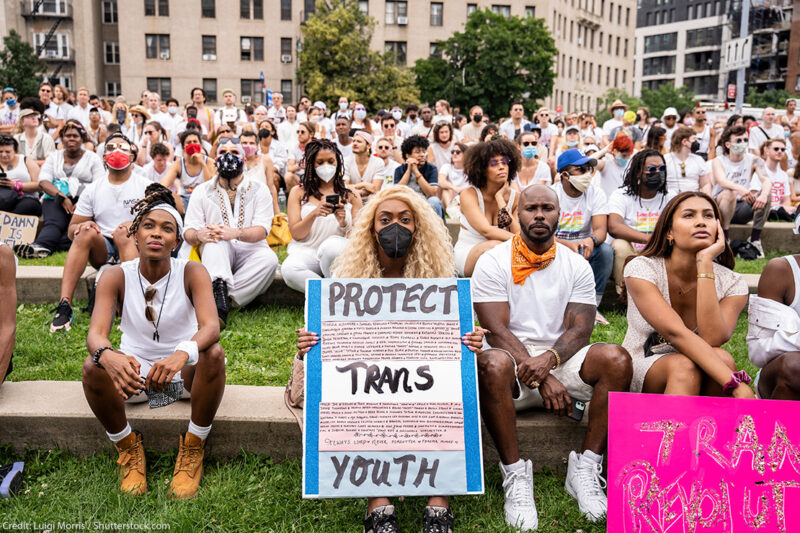 Florida’s latest attack on LGBTQ rights would promote disinformation about gender-affirming care, while preventing trans youth from receiving it.

On Friday, August 5, the Florida Board of Medicine ignored the warnings of medical experts and parents with transgender children and voted to adopt a “standard of care” that opposes gender-affirming care for trans youth — a move that would put the licenses of medical professionals at risk for providing life-saving care. This vote does not immediately impose restrictions on gender-affirming care, but does begin a regulatory process to do just that.

This is the latest in a coordinated attack on the health care needs of transgender youth and adolescents. Below you’ll find an explanation of what is happening in Florida, what may happen next, and steps Florida residents can take to protect trans kids, their families, and their medical providers.

What did the Florida State Board of Medicine vote to do?

The Florida state Board of Medicine (BOM) is responsible for setting standards of care for all medical providers in Florida, and for enforcing their compliance with licensing and disciplinary review. Changing the standards of care requires (at a minimum) a formal rulemaking process under the Florida Administrative Procedure Act. On Friday, August 5, the board officially began the formal rulemaking process, which lasts up to 180 days and usually requires at least 90 days to complete, to consider proposed regulations that would restrict medically-necessary care for transgender youth. The proposed changes to state standards of care would do two things:

What is gender-affirming care?

According to the U.S. Department of Health and Human Services, “Gender-affirming care is a supportive form of health care. It consists of an array of services that may include medical, surgical, mental health, and non-medical services for transgender and nonbinary people. For transgender and nonbinary children and adolescents, early gender-affirming care is crucial to overall health and well-being as it allows the child or adolescent to focus on social transitions and can increase their confidence while navigating the health care system.”

Gender-affirming care is a very individualized form of health care, and will look different for each person depending on their age, gender, and other physical and mental health needs. For prepubescent transgender youth, this care typically involves a “social transition” (changing clothes, hair, name, etc.) and never involves surgery or other irreversible medical treatments. During or after puberty, many transgender youth may receive reversible puberty blockers, hormone replacement therapy, or other medical interventions as overseen and prescribed by medical professionals. Some older transgender adolescents can and do access surgical care on a case-by-case basis as recommended by the World Professional Association of Transgender Health.

Gender-affirming care is widely recognized as the only evidence-based approach to addressing the health care needs of transgender youth, including severe mental health risks. For more:

The medical community has already been very critical of Florida’s ongoing effort to ban gender-affirming care. In June, the Agency for Health Care Administration, which oversees Florida’s Medicaid program, published a report claiming the national standards of care for gender dysphoria are at odds with nationally accepted standards for Medicaid coverage. Medical and legal experts quickly condemned the proposed regulations as “thoroughly flawed and lacking scientific weight.” In April, the Florida Department of Health (DOH) issued a memo recommending against gender-affirming care for children and adolescents. Researchers cited in the memo by the surgeon general in an attempt to justify these restrictions accused him of misrepresenting their work, and denounced the proposed restrictions.

Three hundred Floridian health care providers who work with transgender youth then published an open letter in the Tampa Bay Times, condemning the proposed regulations. The guidance from the governor and surgeon general, the experts wrote, “misrepresents the weight of the evidence, does not allow for personalized patient and family-centered care, and would, if followed, lead to higher rates of youth depression and suicidality.”

Similar bans signed into law in Arkansas and Alabama are both blocked by federal courts.

The Florida State Board of Medicine vote was triggered by a “petition to initiate rulemaking” submitted to the board by the DOH at the behest of Surgeon General Joseph Ladapo, who heads the DOH. The move came at the direction of Gov. Ron DeSantis, who appoints the BOM’s members and has long pushed a broader extremist and anti-trans political agenda.

Now that the board has initiated rulemaking, they will work internally to draft a proposed regulation, submit it for formal review, comments, and public hearing, and eventually publish a final rule. Once they publish their proposed regulation, they must accept public comments for 21 days, then hold a public hearing. After the hearing, they must wait at least 14 days to publish the final version of the regulation. Once the final regulation is published, it goes into effect 20 days later.

If the board does in fact make a final regulation to ban gender-affirming care for minors (or something even more expansive), it would likely go into effect in October or November of 2022.

What impact would this regulation have on providers of gender-affirming care in Florida?

If a final regulation is adopted and goes into effect (and is not enjoined by a court), that would mean any providers who continue to provide this care to minors would be subject to professional discipline by the BOM. Disciplinary proceedings can be initiated by public complaint and by the surgeon general’s staff directly. That discipline could lead to suspensions or revocations of medical licenses.

Most likely, that would mean all providers would voluntarily stop providing such care, health care insurance plans would proactively stop covering it, and malpractice insurers would impose higher premiums or drop coverage for gender-affirming providers even if they don’t treat minors or the population covered by the ban.

What can I do to stop it and ensure Floridians have access to gender-affirming care?

Once the BOM publishes its proposed rule to change the standard of care to ban gender-affirming care for minors, the board will be required to accept written comments from the public for 21 days starting on the day the proposed rule is published in the Florida Administrative Register. When the 21 days have concluded, a public hearing will be held by the board. Comments submitted by the public by email or written letter will be included in the official record of the BOM proceedings.

Members of the public can also attend the public hearing, although the number of individuals who can speak at the public hearing can be limited and will be controlled by the BOM. During a public hearing in July 2022 concerning the Medicaid rule changes, the Agency for Health Care Administration filled their speaker slots predominately with speakers who were hostile to gender-affirming care. If the BOM takes the same approach, it may be difficult or futile to attempt to make public comments at the hearing.

One of the most important things you can do is register to vote before the October 11 registration deadline and help elect lawmakers who will work to protect the rights of transgender youth, their families, and their health care providers.