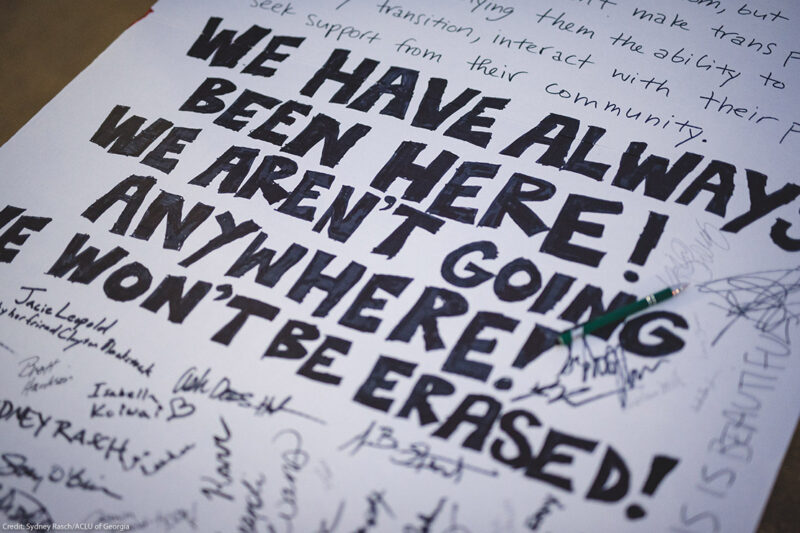 Prominent transgender and non-binary people as well as businesses, professional associations, and medical professionals are speaking out against Arkansas’ ban on gender-affirming health care.

In 2021, Arkansas passed a law banning gender-affirming healthcare for trans young people. This discriminatory law would not only prohibit healthcare professionals from providing or referring trans young people under 18 for medically necessary health care, it would also allow private insurers to refuse to cover gender-affirming care for trans people of any age. If it is allowed to go into effect, the law will undermine the mental, emotional, and physical health of transgender and non-binary people across the state.

Though the ACLU has won a temporary pause on Arkansas’ health care ban, the fight continues in federal appeals court and in statehouses around the country, which is why trans stories are so important. While Arkansas is the first — and so far, only — state to pass such legislation, similar bills have been introduced in over 30 states around the country.

An amazing 58 transgender and non-binary adults including actor Elliot Page, activist Miss Major Griffin-Gracey, media personality Jazz Jennings, state senator Sarah McBride, and filmmaker Lilly Wachowski have stood up in defense of ACLU’s clients. They shared their stories in a “friend of the court” amicus brief filed by the Transgender Legal Defense & Education Fund (TLDEF) and Cleary Gottlieb Steen & Hamilton LLP in support of plaintiffs in the ACLU’s case in the U.S. Court of Appeals for the Eighth Circuit, Brandt v. Rutledge.

Read their stories below about how gender-affirming care has changed their lives for the better, the hardships of gender dysphoria, and the joys of transitioning.

Trans young people know who they are.

North Carolina-raised film producer Rhys Ernst remembers: “One of my earliest conscious memories, in which I felt the most alive and like myself, was at age 3, when I realized quite clearly that I was a boy. I felt a strong jolt of purpose and belonging claiming that identity for myself.”

Jazz Jennings from Florida, now a 21-year-old student, started gender-affirming treatment when she began puberty and then went on to receive gender-affirming hormones. She told the court how having a typical female puberty helped her: “I developed alongside my peers as a female teenager. I was able to lead a happy childhood because I was able to live as the girl I knew I was.”

Noted transgender activist Major Griffin-Gracy, an Arkansas resident who is now over 70, first began receiving gender-affirming care in the form of hormones when she was 16 years old. While the discrimination she has faced as a transgender woman has made her life challenging, she reflects that receiving hormone treatment as a teen “made life easier than it would have been.”

Miss Major joined the trans youth who are suing the state of Arkansas for the district court hearing in this case (credit: Sydney Rasch/ACLU of Arkansas).

BREAKING: Arkansas’s trans health ban has been BLOCKED by the court. We won’t rest until this cruel and unconstitutional law has been struck down for good. #Arnews 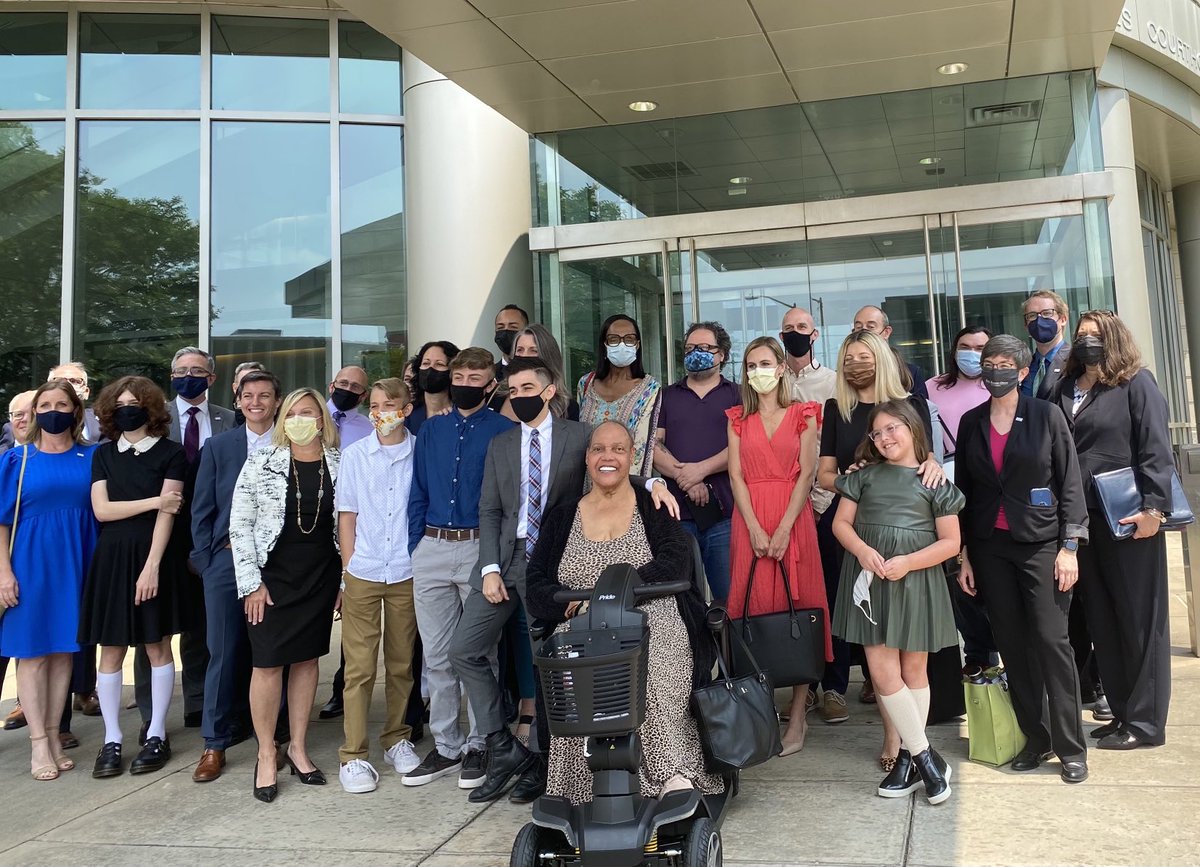 ACLU of Arkansas
@ArkansasACLU
21 Jul, 2021
To prevent tracking by Twitter, we are showing a preview. See original tweet.

Amici Dr. Gwendolyn Herzig of Alexander, Arkansas owns and operates an independent pharmacy. She shared with TLDEF how much coming into her identity empowered her to take a leadership role in the community:

“Living authentically has allowed me to better stand up and provide support for minority communities that need it the most. Especially, being the only trans female pharmacy owner in Arkansas, and maybe the South, in the face of a pandemic, I have been able to provide immunizations, resources, and guidance. Before, it was easier to hide away and to cope day by day. Now I try to take each day by storm and help everyone I can!”

“A gender-affirming therapist helped our whole family come to terms with what was happening, and I think helped my dad the most,” he told TLDEF. “Before he passed, he loved and accepted me totally and would even send me cards saying things like Happy Birthday, Son.”

While his transition began in adulthood, Elliot Page agreed, sharing how his life completely changed once he was able to receive top surgery. “I couldn’t believe the amount of energy I had, ideas, how my imagination flourished, because the constant discomfort and pain around that aspect of my body was gone,” Page told the court.

Team USA athlete Chris Mosier recalled his first triathlon race after top surgery as a moment of gender euphoria: “The feeling of being able to run freely in a body that more closely matched the way I’ve always seen myself was overwhelming.”

My best advocacy is waking up every day & living an awesome life.
Thank you @TLDEF for making this amicus brief to share trans joy. I am grateful to share my joy & success on these pages alongside so many other happy, successful trans adults.

The world needs to see more of this. 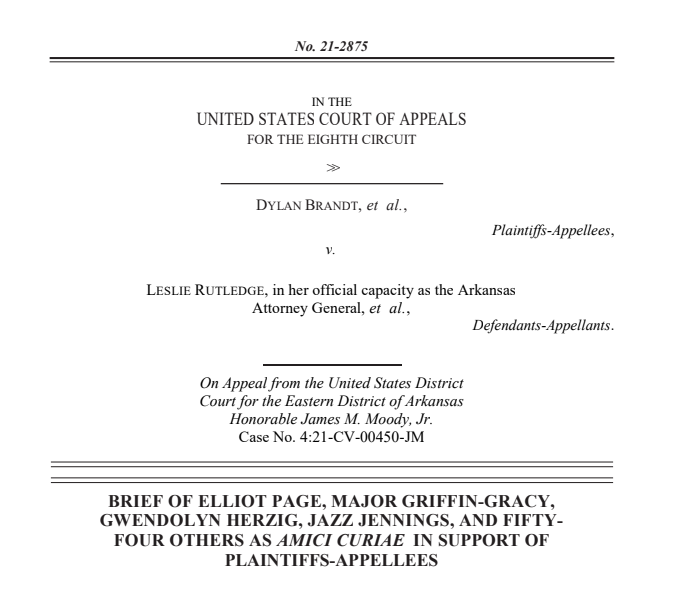 The Chris Mosier
@TheChrisMosier
19 Jan, 2022
To prevent tracking by Twitter, we are showing a preview. See original tweet.

Overall, the story told by this incredible array of transgender and non-binary supporters is that the treatment for gender dysphoria — gender affirmation — works.

Cecilia Gentili, a 49-year-old small business owner and transgender rights advocate, first received self-managed gender-affirming care at age 17, which she said was “great” and “changed her life,” but would have been even more beneficial if she had been able to obtain it through a doctor, rather than on her own. Gentili told the court:

“Transgender youth know who they are, and they know what they need. Our job is to listen to them.”