The Trump Administration Is Trying to Erase Trans People, but the Law Clearly Protects Them 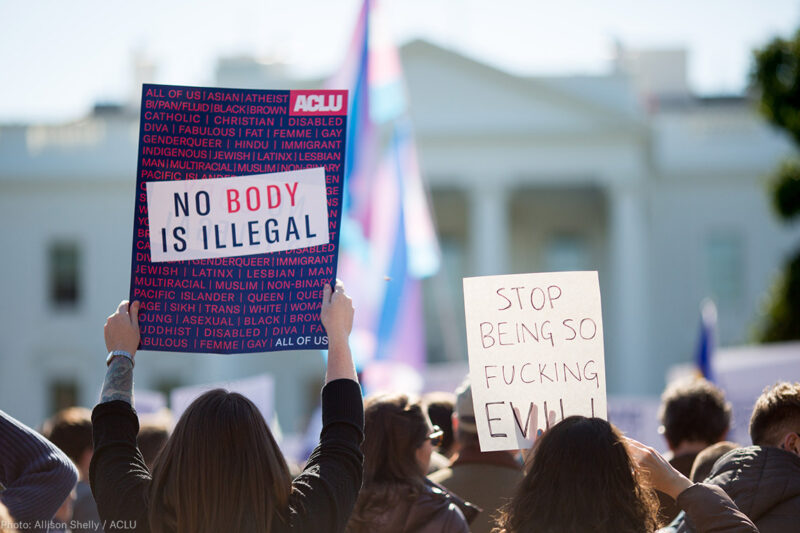 Over the weekend, The New York Times revealed that officials within the Trump administration are pushing for a definition of the term “sex” in federal civil rights laws that would eliminate non-discrimination protections for transgender people. Transgender people and their families understandably panicked at that news.

The reality, though, is that transgender people are already protected from discrimination in many contexts under federal law. And we are already fighting in court alongside transgender plaintiffs to keep those protections from being taken away.

If successful, Trump’s actions would harm millions of people all across America.

Aimee Stephens, whom the ACLU represents, is one of them. She worked as a funeral director and embalmer for six years at a funeral home in Detroit. Aimee knew she was a girl from an early age. When she came out to her boss and co-workers as the woman she is, her boss fired her for being transgender. Aimee and her wife, Donna, have had to sell off their possessions just to stay afloat. This spring, a federal appeals court ruled that what happened to Aimee was not only wrong, it was unlawful sex discrimination. The funeral home has asked the Supreme Court to reverse the case and leave Aimee with no job and no remedy for the discrimination she experienced.

On Wednesday, the Department of Justice will file a brief in the case about whether it believes the federal appeals court was right to rule for Aimee. Its position won’t be a surprise: Attorney General Sessions issued a memorandum in September 2017 declaring that the very federal law Aimee sued under — Title VII of the Civil Rights Act of 1964 — doesn’t protect transgender people from discrimination.

Aidan DeStefano, another ACLU client, would also face harm if the Trump administration succeeded in undoing legal protections for transgender people. Aidan, who is transgender, used to attend Boyertown Area Senior High School in central Pennsylvania. His school district allows boys like Aidan to use the boys’ restrooms, participate in boys’ sports teams, and use the boys’ locker rooms. The school district adopted that policy in large part because a guidance document from 2016 from the U.S. Department of Education made clear that Title IX, which bars sex discrimination by schools, covers anti-trans discrimination.

But in early 2017, the Trump administration revoked that guidance. Yet when anti-trans activists sued Aidan’s school over its policy allowing transgender students to use the restroom, the courts rejected their challenge and upheld the school’s inclusive policy. The people behind that lawsuit have announced that they will ask the Supreme Court to take up the case.

If the Trump administration had its way, Shannon Andrews would also lose the protections of civil rights laws. Shannon supervises a cancer research lab at the University of Wisconsin. Like other state employees, she gets health care insurance through the state. Shannon faced state rules that specifically excluded coverage for hormone therapy and surgery relating to gender transition, even though her doctors say that care is medically necessary for her.

Last month, a federal judge ruled that the state violated federal law when it barred Shannon from receiving this health care because she’s transgender. What’s more, a jury of Shannon’s peers recognized that the state’s treatment of her was wrong and awarded her damages for the discrimination she faced.

In this context as well, the Trump administration is working to change the federal government’s official interpretation of one of the laws that Shannon relied on — a portion of Obamacare that bars discrimination based on sex — in an effort to allow discrimination against transgender people.

The good news here is that this administration doesn’t get the last word on trans people’s rights. Many courageous transgender people are already in court, fighting to maintain these essential civil rights protections. They’ll continue to do so, and we’ll be by their sides, as long as it takes to maintain their basic rights.