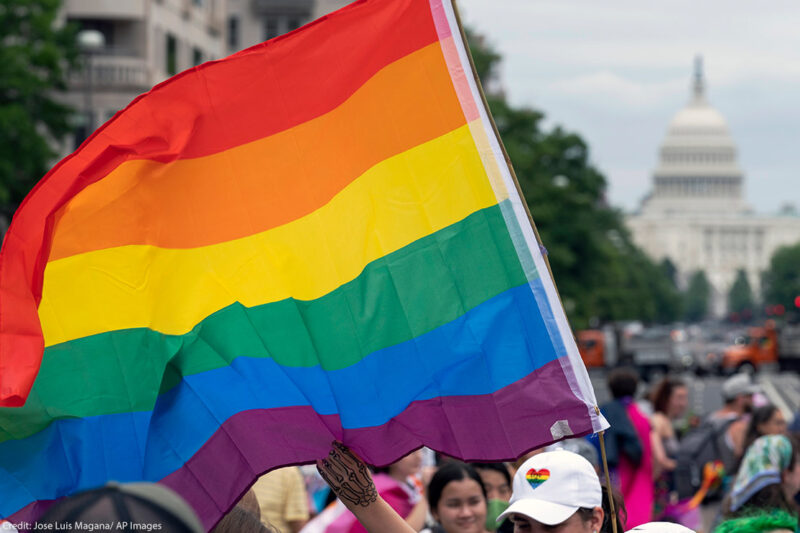 While the bipartisan support for the bill is important, in practice, the bill is quite limited.

The Respect for Marriage Act received bipartisan support in Congress and signals how far public conversations around marriage equality have evolved in recent years. Here’s why that’s a big deal but why — contrary to much of the reporting on it — the measure is actually fairly limited.

Why did the House of Representatives first pass the Respect for Marriage Act?

The push behind the Respect for Marriage Act was Justice Clarence Thomas’ concurring opinion in Dobbs v. Jackson Women’s Health Organization, the Supreme Court’s Mississippi abortion decision in which it overturned Roe v. Wade. Justice Thomas urged the court to overturn its rulings establishing a fundamental constitutional right to use contraception, the right of same-sex couples to marry, and a right to form intimate sexual relationships with other consenting adults. With the right to marry potentially at risk, our friends in Congress wanted to do something.

The law garnered the most support ever for a pro-LGBTQ bill in Congress.

The bill passed the House in July with a large, bipartisan vote of 267-157, making it the most pro-LGBTQ vote in Congressional history. Forty-seven House Republicans voted yes, even in this supremely partisan and bitterly divided Congress, where conservatives are vigorously pushing anti-LGBTQ measures and rhetoric. In contrast, the Equality Act, the LGBTQ movement’s highest priority bill in Congress, which would expressly add LGBTQ people to the Civil Rights Act, passed the House a year ago with a vote of just 224-206, with only three Republicans voting in support. The much larger bipartisan support for the Respect for Marriage Act is a hopeful sign of potential progress to come.

While the bill and bipartisan vote are important, the bill is quite limited.

Here’s why: The Respect for Marriage Act repeals the 1996 Defense of Marriage Act, which in turn did two things: DOMA barred the federal government from respecting the marriages of same-sex couples who were married under state law, excluding them from federal recognition in over 1,000 contexts, from Social Security survivor benefits to the ability to sponsor a spouse for citizenship to equitable tax treatment. It also said that the Full Faith and Credit Clause of the Constitution doesn’t require states to respect the marriages of same-sex couples performed by other states.

The Supreme Court struck down the federal recognition portion of DOMA in the 2013 United States v. Windsor decision. After Dobbs, people fear that Windsor could be overturned, so the Respect for Marriage Act fully repeals the federal respect portion of DOMA and replaces it with a requirement of respect by the federal government. It also repeals the Full Faith and Credit portion of DOMA, replacing it with a statement that Full Faith and Credit requires inter-state recognition. Those would both be significant advances that would backstop the Supreme Court’s ruling in Windsor and the inter-state recognition portion of its ruling in Obergefell v. Hodges should they be overturned.

The Respect for Marriage Act would not require any state to allow same-sex couples to marry.

The second reason that the landmark vote on the Respect for Marriage Act is limited in effect is that it’s not clear that the bill will actually make it out of the Senate given the 60-vote requirement. That would require 10 Republican senators to join all 50 Democratic senators in agreeing to let the bill get to a vote, and then a majority of senators to vote yes. Despite the significant bipartisan support in the House, progress like that in the Senate is still a very steep hill to climb.

The Respect for Marriage Act is important, but Congress and the President need to do much more.

Despite the bill’s passage, the LGBTQ community remains under intense attack in the states. A record number of anti-trans and anti-LGBQ bills were introduced and passed in state legislatures over the past two years. These measures bar trans and non-binary people from access to health care, from updating their identity documents, and from full participation in daily life. They seek to erase trans people from society and to ban schools from talking about the mere existence of LGBTQ people.

Our freedom to marry indeed needs protection from Congress. But we also need to fight against these broader attacks on the LGBTQ community, especially trans and non-binary people. Passing the Equality Act would be a good start. Congress needs to fight as though trans lives depend on its actions, because they do.