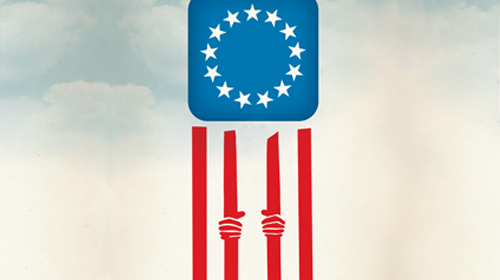 Maybe you spent the last weekend shopping for gifts, writing out holiday cards or studying for final exams. For most of America, the end of the year is a busy time. In Congress, this is a season usually spent trying to jam through bad bills while they hope no one is looking.

The Senate voted last Thursday to pass S. 1867, the National Defense Authorization Act (NDAA), which would authorize the president to send the military literally anywhere in the world to imprison civilians without charge or trial. Prison based on suspicion alone. The power is so sweeping that the president would be able to direct the military to use its powers within the United States itself, and even lock up American citizens without charge or trial.

No corner of the world, not even your own home, would be off-limits to the military. And there is no exception for American citizens. Section 1031 — one of the indefinite detention provisions — of the Senate-approved version of the NDAA has no limitations whatsoever based on geography, duration or citizenship. And the entire Senate bill was drafted in secret, with no hearing, and with committee votes behind closed doors.

I’m not sure which was more surprising — that the majority of senators ignored the pleas of countless constituents, or that they also ignored every top national security official opposed to the provisions. Opposition to the detention provisions came from Secretary of Defense Leon Panetta, CIA Director David Petraeus, FBI Director Robert Mueller, Director of National Intelligence James Clapper, White House Advisor for Counterterrorism John Brennan, and DOJ National Security Division head Lisa Monaco. The Senate ignored them all.

Back in May, the House of Representatives passed its own version of the NDAA, which had a provision authorizing worldwide war wherever any terrorism suspect resides, even if there is no threat to America or Americans. Buried in the bill is a sentence that lets the president order the military to lock up without charge or trial American citizens and anyone else he decides is a suspect, even if the person is right here in America or in such friendly countries as Canada, Great Britain, or France.

That’s 3-1 for indefinite military imprisonment without charge or trial. There’s good reason to worry about what the Big Four do in their secret meetings.

What happens next? First, there will be a more formal House-Senate conference in the next few days to put an official stamp of approval on what the Big Four wrote in secret. And then the bills will be on the floors of the House and Senate by early next week.

Their plan is to move very, very fast. Congress certainly has earned a reputation for being slow, but the plan for the NDAA is to jam it through the House and Senate with as little debate as possible. But you can help stop them.

Amazingly, as soon as a week from today, a final bill could be passed by Congress and headed to President Obama’s desk. His White House has repeatedly threatened to veto the NDAA if these dangerous provisions stay in the bill.

But should it really come to that? Congress itself should come to its senses and ditch the indefinite detention provisions. And just as importantly, Congress should listen to you and every other American on what we all as Americans want for our country. Secret deals for indefinite military detention without charge or trial? Tell Congress we are better than that. It’s not who we are as Americans, and it is not the country or the world we want to pass on to our children and grandchildren.

Now is the time to act and contact your senators and House member. Tell them vote “NO” on the NDAA if it includes indefinite detention without charge or trial.