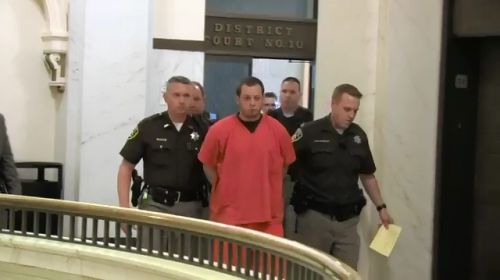 Take a look at the photograph above. It shows a former police officer in an orange jumpsuit making a court appearance to face a felony charge of evidence tampering, as well as misdemeanor obstruction and theft. I hope that police around the nation will see this image (which comes from here) and realize that this is what can happen when they try to seize and destroy photographs or video taken by others.

The charges arise from an incident—now subject of a lawsuit by the ACLU of Nebraska—that started when a man, Octavius Johnson, questioned why his family’s cars were being towed, and ended up with excessive force, a warrantless search and seizure, and the charges mentioned above. Although two of Johnson’s brothers filmed the incident, it may well have never come to light had not a third person, filming from an upper window in a house across the street, also recorded the incident (YouTube video here).

By now we’re used to seeing far too many videos of unnecessary and excessive force by officers. What is extra-shocking in this video is the wanton violation of the centuries-old common law rule that “a man’s home is his castle,” which was incorporated into the Constitution through the Fourth Amendment. Viewing dozens of officers streaming into a man’s private home with no warrant (and no emergency circumstance) is a dismaying indicator of either a gross lack of training, or a feeling on the part of these officers that they could violate the Constitution with impunity, probably because they were operating in an African-American neighborhood.

Like many such videos, this one went viral, received some national attention, and brought a heap of trouble down on the officers involved, four of whom were fired and two of whom are facing charges.

The other thing that is disturbing is that without that third camera recording the incident, it’s likely that none of this would have come to light, after officers inside the house took the two brothers’ cameras. Unless, of course, one of the 28 officers involved did their job as a law enforcement officer and enforced the law by revealing the wrongdoing of their fellow officers. I’m not sure many people would put much faith in that happening, in which case without that third video this family might have filed a complaint, and faced a he-said/she-said situation in which the larger community would have given the police the benefit of the doubt.

Finally, I would note that these police had clearly learned how dangerous cameras can be to officers that violate rights, since they made suppressing the photographic evidence such a priority, and indeed lost their jobs over it. But if police can seize two cameras and still get caught by a third, that also suggests that we may be approaching a point where police come to recognize that abuse anywhere in public is simply too risky for them.