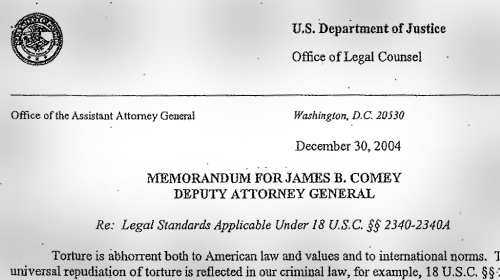 Waterboarding and other torture tactics may once again take center stage in yet another nomination fight. But this time, the stakes involve a ten-year appointment to head the FBI.

Before President Obama nominates—and certainly before the Senate Judiciary Committee confirms—James Comey to be FBI director, the president and the senators should read three torture memos that are central to understanding who Comey is. There is a mountain of other torture documents from the Bush era, but we only need to read three of them.

During the Bush administration, the Senate Judiciary Committee turned away several nominees for top government jobs because of their roles in approving waterboarding and other torture. And on his second full day in office, President Obama invalidated the torture memos and banned the use of waterboarding and other torture tactics. But the president is reportedly poised to sign off on the nomination of the former number two official in the Bush Justice Department, who twice signed off on torture memos okaying waterboarding, wall slams, and other forms of torture.

The first key torture memo for the president and senators to read is the document now known as Bybee II (it was the second torture memo signed by Assistant Attorney General Jay Bybee). There were two memos issued on August 1, 2002, that kicked off the torture program. The first memo—Bybee I—laid out the Bush administration’s legal theory for how to effectively ignore the Anti-Torture Act, while the second memo—Bybee II—described waterboarding and other torture tactics in horrific detail and approved their use on a suspect.

Comey had no role in writing Bybee II (he didn’t start as deputy attorney general until more than a year later), but he made sure it was still “good” law. After the news of widespread torture at Abu Ghraib broke, Comey, to his credit, supported the withdrawal of the Bybee I legal memo. But Bybee II stayed in place.

That brings us to the second key torture memo. Because Bybee II had relied on withdrawn Bybee I, waterboarding and other torture tactics were on even shakier legal ground. Comey reportedly ordered a replacement opinion for Bybee I, so that Bybee II would have a revised legal foundation.

The new opinion—addressed to “Deputy Attorney General James Comey”—was signed on December 30, 2004. The key sentence in the opinion is tucked away in footnote 8. It concludes that the new Comey memo does not change the authorizations of interrogation tactics in any earlier memos. In short, the Comey memo gave a thumbs-up on waterboarding. Read the footnote for yourself:

While we have identified various disagreements with the August 2002 Memorandum, we have reviewed this Office’s prior opinions addressing issues involving treatment of detainees and do not believe that any of their conclusions would be different under the standards set forth in this memorandum.

Even with this new memo, the Bush White House and CIA were still worried about whether they could get away with torture. They ordered up additional legal memos in the spring of 2005. The first memo essentially is a rewrite of Bybee II, with basically a how-to guide on how to simulate drowning, induce hypothermia, slam a person into a wall, and otherwise commit torture and abuse and get away with it. The second memo approved the use of these tactics in combination.

Comey gave a second thumbs-up to waterboarding in signing off on the May 2005 rewrite of Bybee II. He reportedly wrote an email to a colleague at the time, in which he said he “concurred” with the new torture memo. At the same time, he strenuously opposed the approval of the second memo combining torture tactics. Waterboarding was okay, as long as it was done the “right” way.

The FBI director serves for ten years and heads the nation’s top federal law enforcement agency. No one in law enforcement should be more committed to lawful interrogation tactics—and more opposed to waterboarding and other forms of torture and abuse—than the director of the FBI. Before the president decides whether to nominate Comey and before senators decide to confirm him to a ten-year term, they should all spend an hour or two reading these three torture memos that show Comey’s two thumbs-up on waterboarding.

For more on the unsettling record of President Obama’s prospective pick to lead the FBI, see “James Comey: A Closer Look“.