THE SHADOW OF A DOUBT Circles Liberty’s Torch 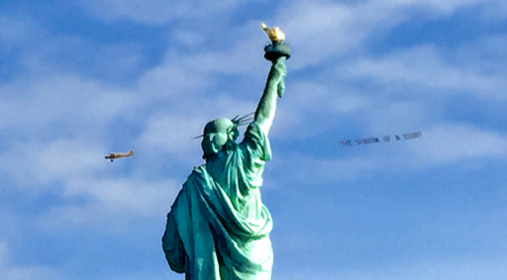 Today, on Veterans Day, on the 11th day of the 11th month, an aircraft began circling the Statue of Liberty trailing a banner that read “THE SHADOW OF A DOUBT.”

The phrase refers to an unattainable burden of proof. In American courts, juries are asked to convict or acquit on the basis of “reasonable doubt,” since proving a defendant’s guilt beyond the shadow of a doubt is all but impossible. As such, it is a jurisprudential ideal: the highest standard of justice to which a society can strive.

Yet today, in a whole range of cases related to the so-called “War on Terror,” guilt is pronounced on the most meager of circumstantial grounds. Tens of thousands of people have found themselves arbitrarily consigned to the American No Fly List without due process or a meaningful right to appeal. At Guantánamo, a “preponderance of the evidence,” the standard applied in deciding civil disputes over money, is enough to detain a person indefinitely without trial. In the case of “signature” drone strikes, individuals may be targeted for assassination based on ostensibly suspicious patterns of behavior, while a delusive definition of the term combatant counts any male of military age in proximity of an attack, without explicit evidence posthumously proving them innocent.

Such policies upend the presumption of innocence, circumventing international laws governing the treatment of prisoners and the safeguarding of civilians during war.

Veterans Day, or Armistice Day as it was originally named, was first observed on November 11, 1919, commemorating the end of WWI with a moment of silence. Congress later passed a resolution proclaiming “the cessation of the most destructive, sanguinary, and far reaching war in human annals and the resumption by the people of the United States of peaceful relations with other nations,” inviting Americans to fly their flag and observe the date “with appropriate ceremonies.”

This flight was my response to that invitation.

It is part of a project called Severe Clear and follows on from a skywriting performance last Memorial Day weekend for which I had the words “EXISTENCE OR NONEXISTENCE” written above the New York City skyline. The phrase was extracted from a letter sent by the CIA to the ACLU rejecting their Freedom of Information request for documents relating to the government’s covert drone program. The letter stated that the CIA could “neither confirm nor deny the existence or nonexistence” of records responsive to their request. Images of the skywriting spread on social media sites thanks to the number of people who posted images online, and a few days later the CIA officially launched itself into the Twittersphere with the inaugural message, “We can neither confirm nor deny that this is our first tweet.”

My interest in placing these phrases in the sky is to open them up to a wider interpretation by shifting the context in which we encounter them, from a legislative framework to something more ambiguous and resonant. Whereas the law relies on linguistic precision, artists and writers take interest in the slippage that occurs in meaning. It is this slippage that is often exploited for political expediency.

Liberty Enlightening the World, the official title of Frédéric Bartholdi’s colossal statue of the Roman goddess Libertas, was conceived and constructed in the years following the American Civil War, and gifted by France in revolutionary solidarity. Its pedestal was constructed on the star-shaped walls of Fort Hood, a military installation left over from the War of 1812. Clutching a tabula ansata and torch — symbols of freedom and equality under the law — and a broken chain at her feet, the Statue of Liberty was founded, literally and philosophically, on the relics of war.

Following the attacks of 9/11, the island was closed, and for a further eight years access to the statue was suspended. Like many emancipatory emblems at the time, Liberty could only be glimpsed from afar. Over a decade later, the Senate’s heavily redacted torture report is just now due for release, while Edward Snowden’s revelations about bulk surveillance demonstrate the extent to which American ideals have been eroded in the name of national security.

In his ruling on the rights of suspects to challenge their own detention, Supreme Court Justice Anthony Kennedy declared that, “The laws and Constitution are designed to survive, and remain in force, in extraordinary times.”

For a nation born out of armed struggle, which has been at war continuously for over half a century, this fundamental friction between liberty and authority cuts to the core of the rhetoric around what it means to be free.

David Birkin is an artist based between New York and London. He was an ISP fellow at the Whitney Museum of American Art and a graduate of Oxford University and the Slade School of Fine Art. He would like to thank a/political for making this project possible.