This Torture Awareness Month, Honor Those Who Opposed Rendition and Torture

Ask President Obama to honor those who stood against rendition, torture and abuse.
Suzanne Ito, ACLU
Share This Page
June 1, 2011

Last month, the Supreme Court announced it would not hear the case we brought against Boeing subsidiary Jeppesen Dataplan on behalf of five victims of the CIA’s extraordinary rendition program. Our lawsuit charged that the company knowingly provided direct logistical support to the aircraft and crews used by the CIA for the kidnapping and torture program.

We filed the lawsuit back in May 2007, and while the federal government wasn’t named as a defendant in the suit, the government intervened in the case anyway to shield Jeppesen with the “state secrets” privilege, asserting that even allowing the case to be heard in a court of law would jeopardize national security. But as ACLU legal director Steve Shapiro said after the Supreme Court’s refused to hear the case: “In a nation committed to the rule of law, unlawful activity should be exposed, not hidden behind a ‘state secrets’ designation.”

One of the victims of the rendition program, Canadian citizen Maher Arar, who also asked the Supreme Court to hear his case and was also refused, is among the subjects of Amnesty International’s 50 Years of Human Rights campaign, marking the 50th anniversary of the organization’s founding. (You guys are just babies! We turned 90 last year!) This cool infographic encapsulates Arar’s story (click to enlarge): 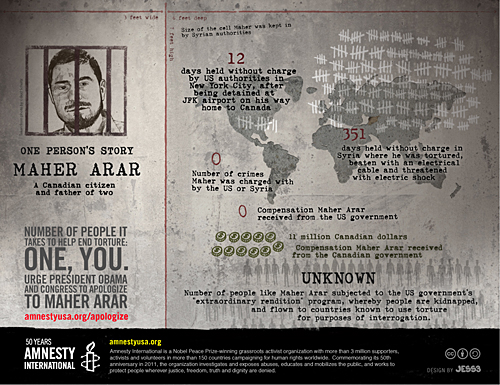 Today is the first day of Torture Awareness Month. Ask President Obama to honor those who stood against rendition, torture and abuse by sending a letter to the White House today.