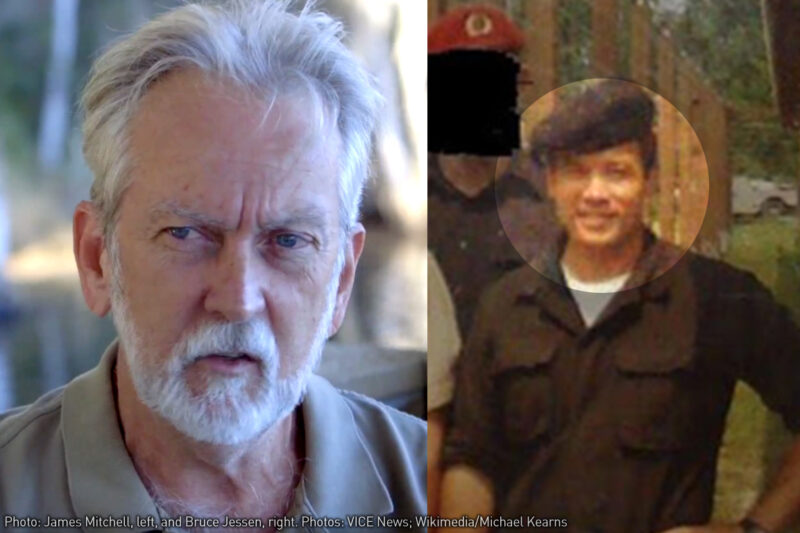 According to the psychologists who teamed up with the CIA to design, implement, and oversee the agency’s post-9/11 torture program, torture is just politics. That’s what James Mitchell and John “Bruce” Jessen, CIA contractors who profited enormously from torture, told a federal court last month.

Facing a lawsuit by three of their victims, the psychologists argued that courts can’t even hear claims of U.S. government torture — because judges can’t condemn torture “without implicitly questioning, and even condemning, U.S. policy on the war against al-Qa’ida.” In other words, Mitchell and Jessen argue torture is a political decision that the executive branch gets to make without any judicial oversight.

Mitchell and Jessen are trying to avoid answering for what they did. Last week the ACLU responded on behalf of our clients, Suleiman Abdullah Salim, Mohamed Ahmed Ben Soud, and the family of Gul Rahman. All three were kidnapped by the CIA and tortured and experimented upon according to Mitchell and Jessen’s protocols. Mr. Rahman died as a result of his torture, while Mr. Salim and Mr. Ben Soud were eventually released. None was ever charged with a crime by the United States.

As we explain in our brief, torture is unequivocally illegal under both U.S. and international law. Every branch of our government has recognized that the courts have an essential responsibility in enforcing the prohibition on torture. Over two decades ago, Congress expanded the judiciary’s existing ability to provide remedies to victims because “universal condemnation of human rights abuses ‘provide[s] scant comfort’ to the numerous victims of gross violations if they are without a forum to remedy the wrong.” The State Department has repeatedly claimed to international human rights bodies that our courts remain open to victims of torture.

Mitchell and Jessen argue that they should be immune from accountability to their victims — even though they personally made millions of dollars from CIA torture. They say that because the federal government has unique immunity from lawsuits, federal contractors should also be immune. But contractors don’t share the government’s immunity because they face a completely different set of incentives and restrictions than government employees. This case illustrates the dangers posed by contractors who seek profit at any cost.

The CIA itself belatedly acknowledged Mitchell and Jessen’s conflict of interest in the torture program that the contractors created and oversaw. But before that happened, the corporation they formed was paid $81 million by the CIA — or in other words, the American taxpayer. Our brief explains that, contrary to Mitchell and Jessen’s claims, they don’t get to torture with impunity.

Torture isn’t politics; it’s a crime condemned around the world. It’s essential that we hold accountable those responsible for torturing in our name. A critical step in that process is letting victims have their day in court.

Suleiman Abdullah Salim, Mohamed Ahmed Ben Soud, and the family of Gul Rahman should get the chance to seek justice from the psychologists who tortured and experimented on them. Anything less would be unconscionable. Our country can’t turn the page on torture and put this shameful practice behind us until wrongdoers provide apologies and redress to the victims and survivors.