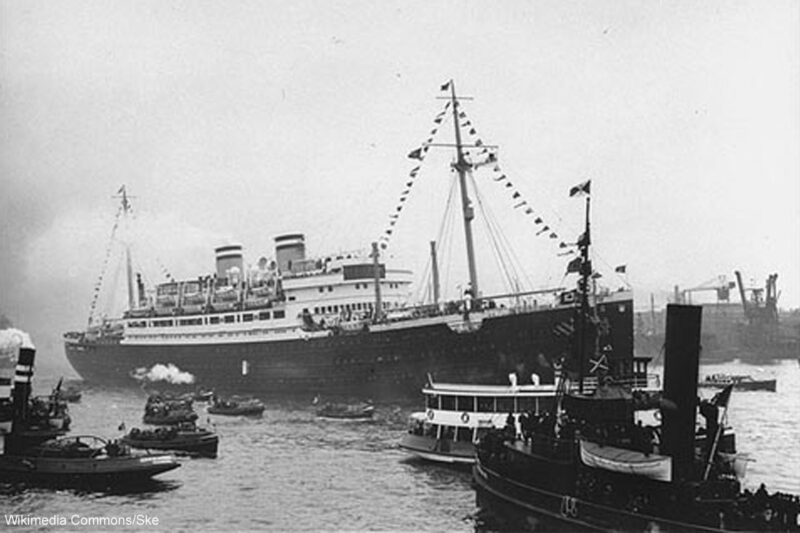 This piece was originally published by The Guardian.

In 1939, the German ocean liner St. Louis and its 937 passengers, almost all Jewish refugees, were turned away from the port of Miami and sent back to Europe. Of those passengers, 254 were murdered in the Holocaust. The U.S. government turned away those refugees, so heartbreakingly close to safety—and also restricted Jewish immigration and instituted new vetting procedures—because of rampant overblown fears that the Nazis might smuggle spies and saboteurs in among the Jewish refugees.

Yesterday, on Holocaust Remembrance Day, The White House put out a statement that failed to mention the 6 million Jews who were exterminated by the Nazis. Hours later, President Trump signed an executive order suspending all refugee resettlement for 120 days and indefinitely suspending the resettlement of refugees from Syria. In addition to banning Syrian refugees, the president ordered a ban all entries of the nationals of seven majority-Muslim countries: Iraq, Syria, Iran, Sudan, Libya, Somalia, and Yemen, for 90 days, and provided that the ban might be extended and that additional countries might be added to that list.

Trump’s executive order is a major step toward carrying out his campaign threat to ban the admission of Muslims into the United States. Tellingly, today’s order authorizes the U.S. Secretary of Homeland Security to admit refugees on a “case-by-case” basis, notwithstanding the 120-day suspension, for people of a minority religion in their home countries. Trump announced during his press conference that his order will help Christians to enter the United States.

In effect, Trump has barred Muslims from entering the United States, while favoring the entry of Christians.

One of the tenets upon which our country was founded is that religion is our own business and not the government’s. We have freedom of belief. We do not have religious litmus tests for participation in society. Trump’s order is anathema to those founding principles. It violates the First Amendment’s Establishment Clause, which prohibits the government from preferring or disfavoring any religion. Trump’s anti-Muslim policy also violates the Equal Protection Clause, the part of the Fourteenth Amendment that guarantees that everyone is entitled to equal protection under the law.

Trump’s orders are immoral as well as unconstitutional. He is barring the entry of modern-day counterparts of the passengers of the St. Louis — children injured in Syria’s terrible and brutal civil war, who are at imminent risk of being killed. And Trump’s order is a slap in the face to the millions of Americans who uphold our best traditions of welcoming the stranger seeking refuge.

Trump’s policy is also foolish. Former senior U.S. military commanders, diplomats, and homeland security officials, both Democrats and Republicans, have publicly stated that a block on refugees from Syria and other Muslim countries is contrary to U.S. security interests because it feeds the ISIS narrative that there is a war between Islam and the West and that Muslims are not welcome in the United States.

Moreover, as demonstrated in ACLU litigation last year, only the most vulnerable Syrian refugees are resettled in the United States and that only occurs after vigorous security screening by the National Counterterrorism Center, the FBI, the Defense Department, the State Department, and US Customs and Border Protection.

Among those who may barred from entering the United States is Hameed Khalid Darweesh, an Iraqi man who worked as an interpreter for the U.S. Army’s 101st Airborne Division. According to Brandon Friedman, a former Obama administration official who commanded a platoon during the invasion of Iraq, the Iraqi “spent years keeping U.S. soldiers alive in combat in Iraq.” He arrived at New York’s JFK airport on Friday evening and was detained.

The ACLU along with the International Refugee Assistance Project, the National Immigration Law center and Yale Law School’s Jerome N. Frank Legal Services Organization, as well as the firm Kilpatrick Townsend & Stockton, filed suit early this morning. We are a diverse society, built largely on the sweat and ingenuity of immigrants and refugees.

American Muslims, immigrants and U.S.-born alike, are part of the fabric of this nation and part of what makes America great. As U.S. businesses, investors, and universities have pointed out, American Muslims are our neighbors, friends, and colleagues. They are us. Trump’s ban separates American families and deprives our country of the contributions that these newcomers, and their children and grandchildren, will make as Americans.

Nearly 80 years ago, U.S. government officials, backed by the deliberately stoked fears of refugees, turned refugees away at our shores and sent men, women, and children back to their deaths. Today, Americans look back in shame at that moral, political, and legal failure—even as our president repeats the mistakes of the past. We are better than today’s executive order, and we must rise up and insist that America live up to our best ideals and not our worst fears.