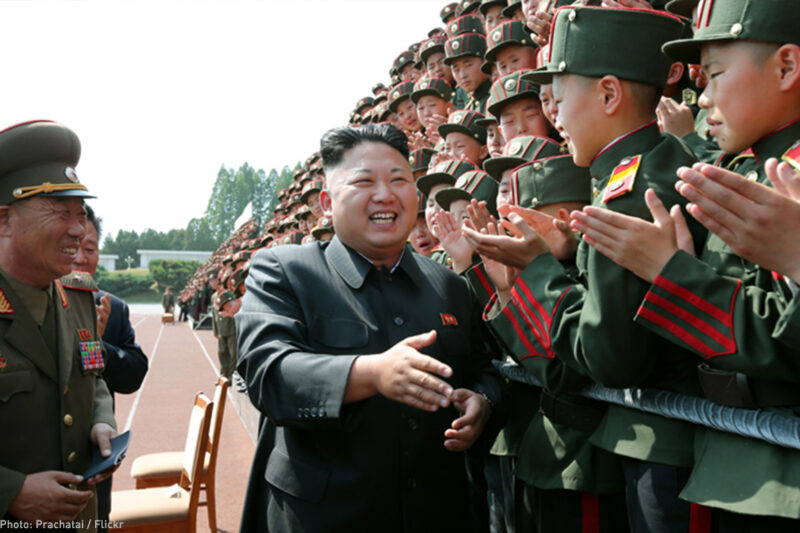 President Trump repeatedly tweets threats at North Korean dictator Kim Jong-un as if Trump too has dictatorial powers over the military.

Over the past four weeks, Trump’s drumbeat of threats against North Korea has been so extraordinary and extreme that he appears to be threatening nuclear war based on North Korean threats alone. Trump has promised “fire, fury, and frankly power the likes this world has never seen before.” He’s also warned North Korea that “things will happen to them like they never thought possible.”

Trump seems to believe the decision on whether to attack North Korea is his alone. Earlier this week, he was asked whether the United States would attack North Korea and replied, “We’ll see.” Secretary of Defense James Mattis gave a longer explanation this week, stating, “Any threat to the United States or its territories, including Guam, or our allies will be met with a massive military response, a response both effective and overwhelming.” He went on to add: “We are not looking to the total annihilation of a country, namely North Korea, but as I said, we have many options to do so.”

North Korea has a dictator, but the United States does not. Trump does not have dictatorial powers over the military. Instead, he is restrained by the Constitution that he swore to uphold and protect.

The ACLU wrote to President Trump this week to urge him to uphold the Constitution, and with it the fundamental principle of separation of powers. Trump must recognize the sole authority of Congress to declare war. Trump cannot use military force against North Korea in the absence of Congress either declaring war or explicitly authorizing Trump to use military force.

Despite recent threats by North Korean leader Kim Jong-un and the reported firing of test missiles, Trump has no constitutional authority to use force against the country. The one exception to the Constitution’s delegation to Congress of the war power is that the president may unilaterally order the use of force to, in the words of James Madison, “repel sudden attacks,” which is not the case here at all.

Article I of the Constitution explicitly and exclusively reserves for Congress the power to declare war. Congress alone has the power “[t]o declare War, grant Letters of Marque and Reprisal, and make Rules concerning Captures on Land and Water.” Any use of force against North Korea without a declaration of war or explicit authorization by Congress would strike at the very heart of the fundamental principle of separation of powers that is at the core of the Constitution and is the undergirding of our democratic form of government.

The ACLU does not take a position on whether military force should be used against North Korea. However, we have been steadfast in insisting — from Vietnam through the war in Afghanistan, both wars in Iraq, the military action against Libya, and the ongoing use of force in Iraq, Syria, Yemen, and Somalia — that decisions on whether to use military force require Congress’s specific, advance authorization. Absent a sudden attack on the United States that requires the president to take immediate action to repel the attack, the executive does not have the power under the Constitution to decide to take the United States into war. Such power belongs to the Congress alone.

Thomas Jefferson and the other drafters of the Constitution understood the danger of putting into the hands of a single person, whether king or president, the power to both declare war and carry out a war. The framers of the Constitution split the war powers between the executive and legislative branches, giving the Congress the power to initiate hostilities while putting the armed forces under the command of the president.

As Alexander Hamilton explained, the power of commander in chief “amount[s] to nothing more than the supreme command and direction of the military and naval forces; while that of the British king extends to the DECLARING of war and to the RAISING and REGULATING of fleets and armies, all of which, by the Constitution under consideration, would appertain to the legislature.”

There is an additional impediment to Trump taking the country into war against North Korea. The United States is bound by the U.N. charter, which at its very core provides: “All Members shall refrain in their international relations from the threat or use of force against the territorial integrity or political independence of any state, or in any other manner inconsistent with the Purposes of the United Nations,” unless acting in self-defense or as authorized by a resolution of the U.N. Security Council. Use of force against North Korea, in the current absence of a Security Council resolution, would violate the most fundamental provision of the most fundamental treaty in international law.

Despite Trump’s threats of military action against North Korea — with allusions to the possible use of nuclear weapons against another country for the first time since World War II—he has no power under the Constitution or the law to order a military attack against North Korea, except to “repel sudden attacks,” which have not happened. Trump’s tweets are not only threats against a North Korean dictator. They are threats against our Constitution.