We Learned a Lot From the Senate Torture Report. Including What We Still Don’t Know. 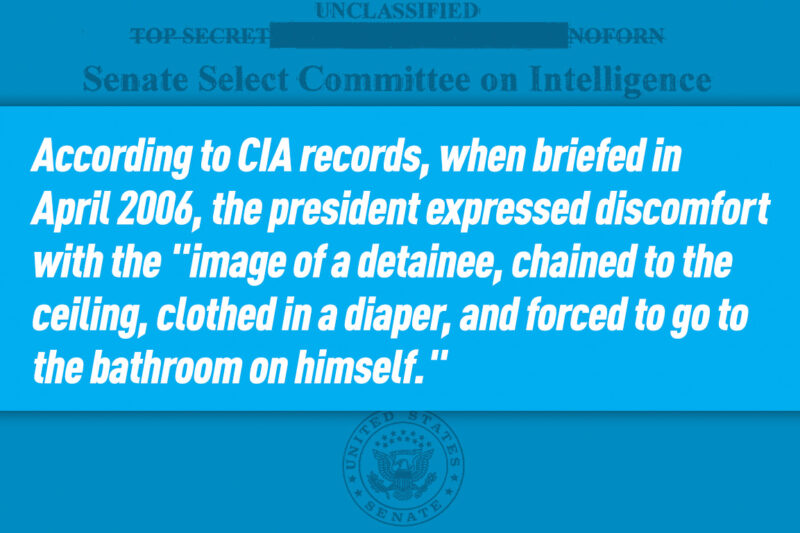 The executive summary of the Senate torture report, released last December, exposed a system of abuse that was far more brutal than the CIA ever admitted to the White House, Congress, the courts, or the American public. But for all its revelatory, gruesome details, it also revealed more about what we don’t know.

The 525-page summary released by the Senate Select Committee on Intelligence references documents detailing secret legal defenses for torture, attempts at covering up illegality, indications of dissent from within the CIA, and more. To fill in the blanks, we filed a Freedom of Information Act request today for 77 documents, most of which are referenced in the report.

The ACLU has previously acquired and made public redacted versions of some of those documents (see, for example, the OLC memos that were released to us in April 2009). Others have been totally hidden from Americans and deserve to see the light. We’re submitting this new request because we think the public is entitled to a full account of what happened in the CIA’s black sites, and why.

Some details about the still-withheld documents are provided in the Senate’s report and give us a partial understanding as to what the documents contain. In one email referenced by the Senate report, Director of the CIA’s Counterterrorism Center Jose Rodriguez instructed CIA personnel to suppress their doubts about the legality of the so-called “enhanced interrogation techniques” used on detainee Abu Zubaydah. Personnel involved in Abu Zubaydah’s torture wrote headquarters that they believed his interrogations were “approach[ing] the legal limit.”

[I] strongly urge that any speculative language as to the legality of given activities or, more precisely, judgment calls as to their legality vis-à-vis operational guidelines for this activity agreed upon and vetted at the most senior levels of the agency, be refrained from in written traffic. Such language is not helpful.

Another classified email, written by CIA torture contractor James Mitchell, provides a glimpse of President Bush’s “discomfort” with an “image of a detainee, chained to the ceiling, clothed in a diaper, and forced to go to the bathroom on himself.”

According to the Senate report, the still-withheld documents also tell another story: one about those within the government who objected to torture even when it tarnished their reputations or derailed their careers. One email referenced in the Senate report was written by the CIA’s chief of interrogations after he received the interrogation plan for Abd al-Rahim al-Nashiri, a former CIA detainee currently being held at Guantánamo Bay. The CIA chief wrote that he would “no longer be associated in any way with the interrogation program due to serious reservation[s]” and that he would be “retiring shortly.” Among other things, the report quotes him as writing, “[t]his is a train wreck [sic] waiting to happen and I intend to get the hell off the train before it happens.”

The ACLU has worked to expose the details of the torture program for more than a decade. As a result of our previous FOIA requests and ensuing litigation, the government has released more than 100,000 pages of torture-related documents. But while the ACLU has received a great deal of information on the Department of Defense’s torture of detainees, some of the critical documents relating to the CIA’s torture program have remained partially or fully hidden. Our fight for transparency continues with this request, along with our ongoing battles for the release of the SSCI’s full 6,900-page report and photographic evidence of torture in two separate cases pending before federal appeals courts.

The release of the executive summary should be a turning point — not the endpoint — for transparency.