Why I Have Hope For American Muslim Equality 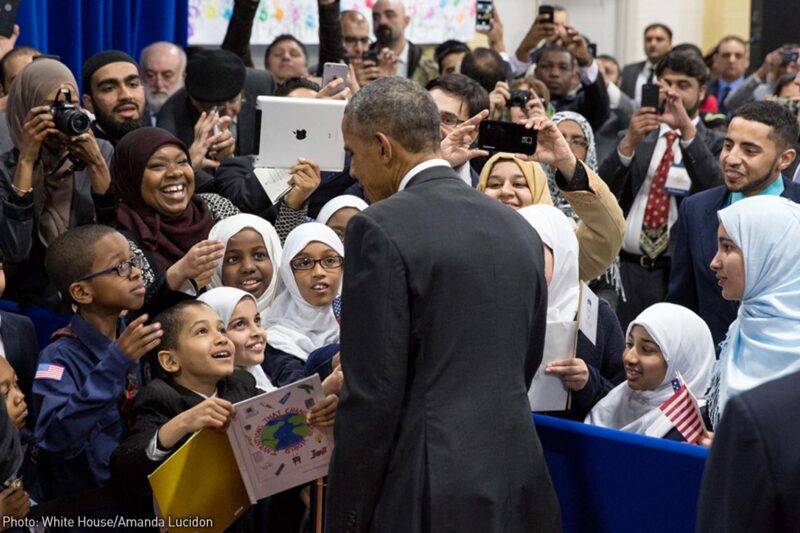 At a time of rising anti-Muslim rhetoric and discrimination, communities nationwide are coming together to push back. This is the first in a series of blog posts meant to highlight this fight for equality and religious freedom.

President Obama gave a milestone speech in defense of American Muslims and religious freedom at a mosque last week. And I had a hard time listening to it.

That may seem counter-intuitive at a time when anti-Muslim hysteria, discrimination, and violence have reached such a crisis stage that The Huffington Post has decided to track a “deplorable wave of hate.” And indeed, it was important for the president to use the power of his office to acknowledge an essential truth:

Like all Americans, you’re worried about the threat of terrorism. But on top of that, as Muslim Americans, you also have another concern — and that is your entire community so often is targeted or blamed for the violent acts of the very few.

Blaming the bad acts of a few on any religious or racial community is the essence of bigotry. Sadly, it’s not new in our country. At various times in U.S. history, Catholics, Jews, African-Americans, and Japanese-Americans — to name just a few — have all been scapegoated as national security threats, and suffered as a result. I’m glad that the president reminded Americans of that past and talked about the history and diversity of American Muslims, starting from those brought here as slaves in colonial times, to the generations who helped build this nation, to all who are part of our rich, pluralistic society today.

What was hard about listening to the president’s speech, though, was the disconnect between his powerful words and government policies that target American Muslims unfairly and foster our national climate of fear and discrimination.

Take so-called “countering violent extremism” programs as an example. The Obama administration has identified them as a top national security priority. Certainly, preventing violence is a laudable goal. But as we document, what little we know about these programs indicates they are overwhelmingly targeted at Muslims and aim to prevent violence by policing ideas and beliefs: Our government wants to charge teachers and social workers with monitoring and reporting to law enforcement the ideas and beliefs of schoolchildren. It shouldn’t surprise anyone that these kinds of programs are corrosive, divisive, and wrongly stigmatize Muslims as inherently suspicious, despite the fact that a miniscule number of American Muslims have been involved in fatal attacks in this country.

We and other civil rights, interfaith, and community groups have repeatedly laid out our concerns about these programs to the Obama administration and received no concrete response. We then filed Freedom of Information Act requests with key government agencies seeking their justification for these programs, their funding criteria, and any privacy and civil liberties safeguards. Again, we received little or no response.

To make much-needed information public, and to vindicate many of the things President Obama said in his speech about the rights of American Muslims, we sued his administration today.

The problems don’t end with these government programs, though. Surveillance programs target American Muslims without any suspicion of wrongdoing. Muslims are detained indefinitely at Guantánamo. Blacklists disproportionately target Muslims. The use of lethal drones in majority-Muslim countries has violated international and domestic law.

For well over a decade, programs and policies like these have sent a very powerful message: When it comes to American Muslims, our nation’s actions often do not match the principles of equal treatment and religious freedom enshrined in our Constitution.

I do not lose hope, though. For me, a key source of inspiration comes from American Muslim communities and allies themselves. It comes from activists engaged in organizing, and from sophisticated conversations taking place all over the country about how discrimination impacts diverse American Muslim communities. It comes from interfaith and political leaders, and local business owners, who stand against anti-Muslim discrimination, like this initiative in Minneapolis. It comes from reading about Holocaust survivors who, on International Holocaust Remembrance Day, decided to speak out against anti-Muslim demagoguery.

And it came this week from an American-Sikh fashion celebrity. American Sikhs, sometimes mistaken for Muslims, have often borne the brunt of discrimination. Waris Ahluwaria was denied boarding on a flight back to the U.S. from Mexico after he was selected for additional screening and wrongly told to remove his turban. He decided to stand up for his rights and not fly until the airline agreed to changes that would benefit not just Ahluwaria, but others. “On this day, and each day hereafter we must remember that our struggle against fear and ignorance is fought with love. That is the only way forward for humanity,” he wrote.

Until love wins and our values are reflected in our government’s policies, we’ll be here fighting.