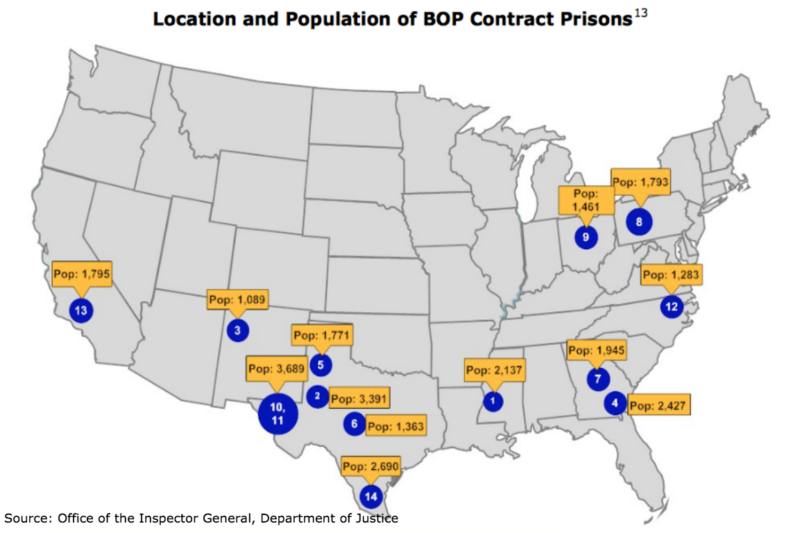 This piece originally ran at The Marshall Project.

On Thursday the U.S. Department of Justice inspector general released a scathing report on the Federal Bureau of Prisons’ monitoring of “contract prisons,” a shadow network of private, for-profit prisons that hold about 11 percent of the nation’s 193,000 federal prisoners.

Though presented in a bureaucratic, flat style, the inspector general’s findings are damning and outrageous. Sentence by sentence, the report shows how the bureau fails to impose basic standards of health, safety, and human decency on the private companies it pays to run these prisons. In one example, the inspector general recounts how a prisoner who told medical staff that he was having trouble breathing was refused immediate care and told to fill out a written request for an appointment. Untreated, he died. Afterward, the Bureau of Prisons conducted a mortality review that criticized this denial of care but did not propose any specific corrective action. As a result, the inspector general writes, “contractor deficiencies went uncorrected and corrective actions were delayed . . . putting other inmates at risk.”

“[A]t risk” — such a mild way of saying, “in danger of dying from causes that are easily treated.” Prisoners in these for-profit prisons have died from untreated HIV, untreated cancer, suicide, and heart attacks and seizures where officials delayed transfer to a hospital.

The inspector general’s report recounts a litany of such potentially deadly “deficiencies” ranging from medical care, to violence, to the misuse of solitary confinement cells as overflow housing. The profit motive is an unstated but ever-present connecting thread. Using solitary confinement cells as overflow space, for example, was something that private prison wardens conceded was “not a good correctional practice,” but which they engaged in because the company’s contract with the bureau encouraged them to continue accepting new prisoners regardless of whether they had the space to house them humanely. Similarly, medical understaffing — such as one prison’s decision to go without a full-time physician for eight months — seems to persist because it is cheaper for the private prison company to pay penalties for understaffing than to provide adequate medical staff.

The inspector general recounts how a prisoner who told medical staff that he was having trouble breathing was refused immediate care and told to fill out a written request for an appointment. Untreated, he died.

But this is a red herring.

At least two previous studies have concluded that, nationwide, private prisons tend to have higher levels of violence than comparable public prisons — even those that don’t hold many Mexicans. Indeed, the prisons examined by the inspector general’s report ought to be easier — not harder — for the companies to manage than the average federal prison. Dubbed “Criminal Alien Requirement” or CAR prisons, they hold non-U.S. citizens who are overwhelmingly serving sentences either for non-violent drug offenses or for reentering the country after deportation and whom the bureau has classified as low security risks.

To prevent these abuses, the inspector general issued a series of recommendations to the bureau to develop better monitoring of its private prison contractors and to convene an internal working group to examine why the private prisons perform worse than their publicly run counterparts. The bureau did not object to the recommendations; they are both sensible and necessary steps, if one assumes that the bureau will continue to rely on private prisons. However, they avoid confronting the larger question of whether it makes sense to continue the federal government’s multi-decade experiment with prison privatization.

Even public prisons are secretive, unaccountable institutions that tend to resist reform. Citizen observation and activism (exemplified by the use of cell phone videos to build momentum for police reform) are next to impossible in a place whose very purpose is to assert total state control over the bodies of the people inside it. But when a for-profit company takes over the institution, this inherently closed nature shields the activities of an entity whose primary duty is to deliver value to its shareholders. The conflict between that profit motive and the legitimate goals of government forces a constant arms race between the contractors (who must seek new, creative ways to maximize their profits) and their government overseers (who must ensure the government is actually getting what it paid for). The inspector general’s recommendations are the latest step in that arms race.

But this is a wholly unnecessary arms race, because there is nothing inevitable about the decision to hand control of prisons over to for-profit companies. The Corrections Corporation of America only created the modern idea of a private prison in 1983, when its founders used their political connections to secure a contract with federal officials and hastily converted a Houston motel into an immigration detention center.

Today’s federal officials should reconsider their reliance on this inherently problematic industry. Indeed, earlier this year, the bipartisan Charles Colson Task Force on Federal Corrections specifically contemplated that federal sentencing reform efforts would enable the bureau to begin cancelling its private prison contracts. The inspector general’s findings, along with other recent reports and exposes, should spur officials to cancel these contracts rather than accept the human and fiscal costs of this continued arms race.