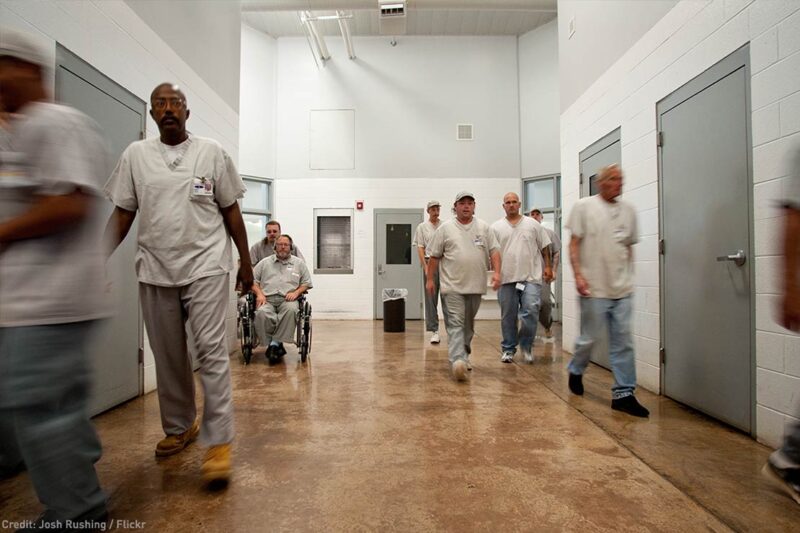 The Emergency Community Supervision Act requires the Bureau of Prisons to immediately place vulnerable individuals in home confinement or other community supervision outside of prison.

A month ago, Congress gave the Department of Justice (DOJ) and Federal Bureau of Prisons (BOP) increased authority to reduce the federal prison population. On March 29th, Congress passed the Coronavirus Aid, Relief, and Economic Security Act (CARES Act), providing DOJ and BOP with the ability to expand home confinement eligibility. Then, Attorney General William Barr “applaud[ed] the substantial steps taken” by DOJ and BOP to “move vulnerable inmates out of these institutions” in an April 3 memo.

Barr’s applause came too soon. In the weeks following his memo, DOJ and BOP have done little more than issue confusing and conflicting guidance around who is eligible for release. Congress must intervene with the Emergency Community Supervision Act, which would address some of the uncertainty. The bill would provide explicit instruction to BOP on how to reduce the federal prison population in the midst of a “national emergency relating to a communicable disease.”

The Emergency Community Supervision Act (S 3579 and HR 6400) was introduced by Sens. Cory Booker (D-N.J.) and Kamala Harris (D-Calif.), and Rep. Hakeem Jeffries (D-N.Y.) last month. It requires BOP to immediately place vulnerable individuals in home confinement or other community supervision outside of prison. The bill identifies “vulnerable individuals” as those who are pregnant – like Andrea Circle Bear, who gave birth in federal custody earlier this month and then died from COVID-19 yesterday; those with underlying health issues; and those who are age 50 or older. These are the very populations that public health experts argue should have their sentences commuted by the president in response to COVID-19.

While Sen. Booker believes the federal government has “an obligation to do everything we can to prevent the spread of this deadly disease, and that means moving certain incarcerated people to community supervision,” DOJ and BOP are falling far short of this responsibility. Since Barr’s April 3 memo, the number of people released to home confinement increased by just half of 1 percent, according to The Marshall Project. And with BOP flip flopping twice last week on who is eligible for home confinement, it is unlikely this percentage will increase without Congress’ intervention.

With 30 deaths in BOP, and a staff death that BOP is not officially reporting, as well as 1,600 incarcerated persons and staff testing positive for COVID-19, there is no time for DOJ and BOP incompetency. Congress must go beyond the authority it provided to DOJ and BOP under the CARES Act and explicitly legislate reduction of the federal prison population, as Rep. Sheila Jackson Lee (D-Texas) called for during Friday, April 24’s Congressional Black Caucus town hall on incarceration and COVID-19. House Speaker Nancy Pelosi then echoed Lee’s call on MSNBC on Sunday.

Congress must advance the Emergency Community Supervision Act with the next COVID-19 relief package. Congressional oversight of BOP from both sides of the aisle reveals no other choice. In addition to requiring BOP to release vulnerable populations to community supervision, the Emergency Community Supervision Act limits the use of pretrial detention and in-person supervised release. It also prohibits the use of incarceration for technical violations of supervised release. In addition to reducing the federal prison population, Congress should legislate incentives for states to reduce their jail and prison populations.

Reducing jail and prison populations in the wake of COVID-19 is not a partisan issue. Groups across the ideological spectrum have asked all levels of the federal government to take action. At this moment, it appears that Congress is the only body that appreciates the life or death consequences of not decarcerating; that tens of thousands more people will die in jails, prisons, and communities without action. Congress can protect those lives by passing the Emergency Community Supervision Act when it legislates additional COVID-19 relief for the country.