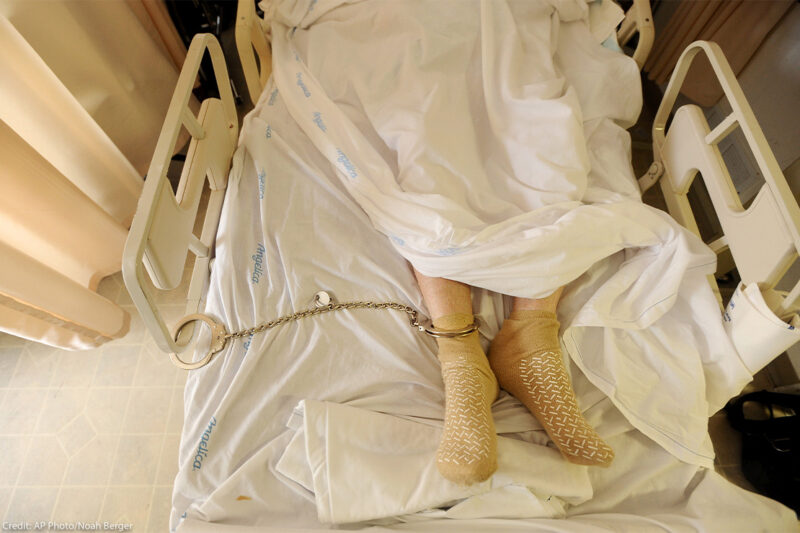 After a long struggle, a damning ruling affirms what our plaintiffs have endured for years.

A prison sentence should not mean people lose fundamental human rights such as access to health care or humane conditions of confinement. Yet in Arizona prisons, despite a settlement promising to improve conditions, this problem persisted for years. Finally, after almost a decade of broken promises by Arizona state prison officials, U.S. District Judge Roslyn O. Silver ruled on June 30 that the Arizona Department of Corrections, Rehabilitation, and Reentry (ADCRR) systematically violates the constitutional rights of people incarcerated in the state’s prisons by failing to provide them minimally adequate medical and mental health care, and by subjecting them to harsh and degrading conditions in solitary confinement units.

The lawsuit, Jensen v. Shinn, is part of a decade-long struggle to ensure that the nearly 30,000 adults and children in Arizona’s prisons receive the basic health care and minimally adequate conditions to which they are entitled under the Constitution and the law. Plaintiffs in the case are represented by the American Civil Liberties Union’s National Prison Project, the ACLU of Arizona, Prison Law Office, Arizona Center for Disability Law, and the law firm of Perkins Coie LLP.

The ACLU repeatedly detailed in court filings that preventable suffering and deaths, including deaths by suicide in solitary confinement, were occurring in Arizona’s prisons.

Our lawsuit was originally filed in 2012, and in 2014, prison officials settled the case, promising to improve health care and conditions in isolation. But in the seven years between settling the case and going to trial, we repeatedly detailed in court filings that preventable suffering and deaths, including deaths by suicide in solitary confinement, were occurring in Arizona’s prisons.

Judge Silver’s ruling came after 15 days of trial held in November and December 2021, where we showed that incarcerated people suffer excruciating pain, gruesome permanent injuries, and preventable deaths due to the state’s failure to provide basic health care. The evidence we presented at trial included expert testimony regarding unconstitutional medical and mental health care, the psychological effects of isolation and conditions in isolation units, and inadequate health care staffing.

Judge Silver’s 200-page order finding Arizona prison officials in violation of the Eighth Amendment cited evidence showing that ADCRR has abdicated its responsibility to deliver health care through its merry-go-round of for-profit correctional health care vendors. Judge Silver also described the gratuitous cruelty of isolation units, including the indefinite incarceration in solitary confinement of seriously mentally ill persons and children who were convicted as adults.

For example, one of our plaintiffs, Kendall Johnson, testified by video with great difficulty from her hospital bed in the women’s prison’s medical unit. Only 37 years old, Ms. Johnson described how she is unable to move her legs and arms, care for herself, read, or barely talk, and passes her time “counting the ceiling tiles” because she is never allowed outside. Although she entered prison as a healthy young woman who was a basketball player, in 2017 she began having numbness in her legs, problems walking, and falling.

Rather than investigate, prison health care staff wrote in Ms. Johnson’s medical records that she was delusional and faking her symptoms. When she finally saw a specialist after several years of notifying prison health care staff, the specialist’s recommendations were ignored. It took years until she was finally diagnosed with advanced multiple sclerosis. Judge Silver called Ms. Johnson’s testimony “profoundly disturbing” and her lack of medical care “a paradigmatic example of the most callous and inhumane indifference” that caused “unspeakable hardship” to her. Judge Silver described the incompetent medical care provided to another incarcerated person as a “seven-year odyssey of incompetence, cruelty, and eventual death.”

Judge Silver also found that ADCRR overuses isolation, with approximately 9.5 percent of its population in isolation — more than double the national average.

Judge Silver also characterized the trial testimony of an incarcerated person with schizophrenia, and videos shown in court of repeated uses of chemical agents against him while on suicide watch or housed in solitary confinement, as “appalling evidence” that was “nothing short of shocking.”

Judge Silver found that ADCRR overuses isolation, with approximately 9.5 percent of its population in isolation — more than double the national average. She noted that some 200 people who ADCRR did not believe require isolation were, nonetheless, in isolation. Further, Judge Silver found that the conditions in ADCRR detention units were “alarming,” with ADCRR failing to offer people showers, recreation, or even food.

Finally, Judge Silver wrote that ADCRR Director David Shinn’s testimony “made clear that he has adopted a strategy of pretending the problems he knows about do not exist.” When Mr. Shinn testified that the quality of health care for incarcerated people exceeded the health care he and his family received, and that he thought that the health care vendor had done an exceptional job because “only” 1 percent of prisoners infected with COVID-19 had died, there were audible gasps from the courtroom audience. Judge Silver described this testimony as “shocking” and “completely detached from reality,” noting Mr. Shinn’s “strange nonchalance” about the “undisputed failures” in the prison system he directed, and criticizing his “flagrant dereliction” of duty.

Judge Silver has asked both sides to provide her with names of neutral experts she can consult with before issuing a final order to prison officials on how to overhaul their health care and isolation units. Whether the department will finally do its duty under the Constitution is unclear. But just as we have for the last decade, we’ll be watching to make sure department officials follow through, for now, and for good.