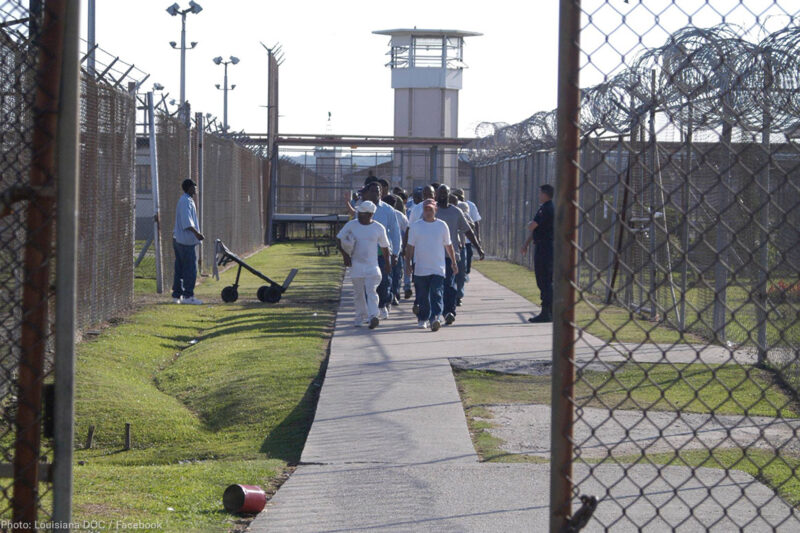 In November 2012, Shannon Hurd, who was serving a life sentence for stealing $14, began losing weight and experiencing flu-like symptoms. His symptoms worsened, and he developed a pain in his side. But doctors at the Louisiana State Penitentiary, also known as “Angola,” repeatedly dismissed his medical complaints.

In the end, Hurd waited three devastating years before he was finally tested and diagnosed with kidney cancer. At that point, the tumors had already spread to his brain. Kidney cancer is generally treatable if it’s caught early. This was not the case here. By the end of 2015, Shannon had lost over 60 pounds. He was often numb in his fingers and feet.

Shannon’s story is not an isolated tragedy but a symptom of prison officials’ chronic failure to provide adequate medical care to people incarcerated at the Louisiana State Penitentiary. It was nicknamed “Angola” for the former slave plantation on which the prison was built, and it is notorious for the brutality of its past and the cruelty of its present, as scores of men are subjected to unnecessary suffering, and even death.

It’s barbarous that a prison system could sentence someone to slow torture by an untreated medical condition. A court of law would not impose such a sentence. But today Louisiana has the highest rate of prison deaths per capita in the country.

In 2015, the ACLU of Louisiana sued, and last week our class action lawsuit challenging these inhumane and unconstitutional conditions finally went to trial. We are joined in court by our partners in the case, including the Promise of Justice Initiative, the Southern Poverty Law Center, Cohen Milstein Sellers & Toll, the Advocacy Center of Louisiana, and attorney Jeffrey Dubner.

Together, we are representing over 6,000 people incarcerated at Angola who have been systematically denied access to adequate healthcare.

Witnesses in the ongoing trial have described horror story after horror story about the cruel and dangerous lack of treatment at Angola. Farrell Sampier, who suffers from a condition that left him paralyzed from the waist down, testified that some patients went unfed and were left sitting in their own feces. Anthony Mandigo described the horrible pain he endures because Angola doctors will not prescribe effective pain medication for his sickle-cell anemia. Lawrence Jenkins told the court that he worries about dying from untreated Hepatitis C. Dr. Michael Puisis, an internal and correctional medicine expert, testified that Angola has one of the worst medical systems he has ever reviewed.

This abysmal treatment is especially harmful to people with disabilities, who have been denied access to even the most basic accommodations required by the Americans with Disabilities Act. One man, who is blind, received no help from prison officials and relied on the help of others incarcerated at Angola.

The trial has illuminated in gruesome detail how brutal treatment harms people during their incarceration, hampers their reentry into society, and violates the U.S. Constitution as well as federal law. The Eighth Amendment, adopted in 1791, bars “cruel and unusual” punishment. Scholars contend this ban was enacted to set America apart from the more brutal elements of the British empire. More than two centuries later, we are still fighting to defend this fundamental principle and the basic human dignity of all people, including those incarcerated in our prisons and jails.

This case is also a reminder that Louisiana has yet to address the greatest financial burden on its prison system: imprisoning old and infirm people long past the time they pose a danger to anyone. The state has more people serving life sentences without parole than Alabama, Arkansas, Mississippi, Tennessee, and Texas combined. Sensible and humane release, which could lower costs, should be a part of a system that puts people and communities first in its decision making about who it incarcerates and for how long.

If the true measure of a society can be found in how it treats its most vulnerable citizens, the cruel and dehumanizing treatment of incarcerated people at Angola is a harsh reflection on all of us.

Louisiana must do better, and we will keep fighting — in court, in the Legislature and in communities — until it does.