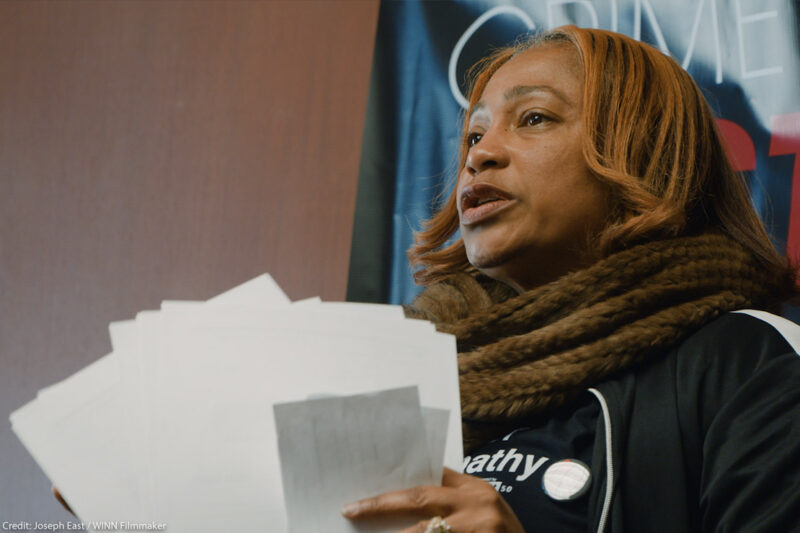 Winn’s story highlights why pregnant people should never be shackled. She is fighting to ensure they aren’t.

Pamela Winn was sent to federal prison when she was six weeks pregnant. In prison, she fell down attempting to step into a van while shackled. She was not given prenatal care and she miscarried a little over three months later, shackled to a prison bed.

Winn, who was released from prison in 2013, is now an activist for the rights of incarcerated women. She helped enact a law to prevent the shackling of pregnant people in Georgia and is leading a mission to end prison birth altogether
But her story is not unique. There are currently thousands of pregnant people in prison. Many are not given proper medical attention, some are shackled even while giving birth, others miscarry — some have even birthed their children, alone in a cell.

In Her Words, This is Pamela’s Story

My name is Pamela Winn. As a registered nurse, I practiced women’s health care more than 10 years where I specialized in obstetric gynecology, perinatal case management, perioperative surgery, and gynecologic oncology. I am the founder and executive director of RestoreHER US.America, a Southern regional policy advocacy reentry organization, led by formerly incarcerated women.

I was sentenced to serve 78 months at a federal prison for a white-collar crime when I was six weeks pregnant. Anytime I had to be transported, I was shackled. Shackling included being chained at my ankles with another chain around my belly that bound my hands in front of my waist with a black box.

While shackled, attempting to step up into a van, I fell. A couple days later I begin spotting with streaks of blood, which I reported to the medical staff for approximately two weeks with no response. The initial reply I finally received was that bleeding was normal with pregnancy. Then they informed me that the prison was structured for men and had literally “no” means of caring for me and would have to get approval from the U.S. Marshals to take me to the emergency room.

The turnaround time for the request and approval ended up being four weeks. At that point, it was no longer an “emergency,” so I was turned away and unable to be treated at the emergency room. The ER physician recommended an obstetrician but was told by the transporting officers that I was only approved for an emergency room visit. I then required a second approval for an obstetrician, which took four more weeks. The obstetrician would need an ultrasound which was not performed on site, therefore requiring a third approval. Once I received the ultrasound, follow-up was required, and a fourth approval was requested. I ended up miscarrying at approximately 20 weeks without any formal or proper prenatal care.

To add insult to injury, I was assigned to a cell on a second floor and my request to be moved fell upon deaf ears causing me to have to climb steps daily. There was a fountain that provided brown water. I protested to the warden, who agreed to provide me with ice daily which did not occur.

When I was miscarrying, I lay wet in blood, locked in a dark cell, curled up in excruciating pain until an officer made rounds roughly five hours later because there was no emergency call button or any way to notify anyone of my situation. I suffered the entire miscarriage shackled to the bed with two male officers between my legs. I was dehumanized with no privacy. When the nurse stated I had passed the fetus and asked for the linen that I had soiled, she was told the officers that the linen which contained my unborn child had been thrown in the trash. In my case it was I had no counseling, nor any opportunity to grieve my miscarriage.

I entered the criminal justice system a healthy single mother of two sons, not ever experiencing any health issues or serious illnesses. I was a registered nurse who had achieved three secondary degrees. I was homeowner and a successful business entrepreneur, the first in my family. After six years, I was released diagnosed with high blood pressure related to my continuous physical stress along with a high sodium diet and depression caused by emotional distress. The additional stress of having my professional license revoked; the challenges of securing employment and stable housing; lacking health insurance, little to no finances, the additional restrictions that come with being a convicted felon, as well as a woman compounded my state of health.

Pamela’s story highlights the harsh reality of thousands of women behind bars. There are no standards of care for incarcerated pregnant people and most return home in worse conditions than when they entered. In the U.S., there are an estimated 58,000 pregnant people admitted to jails and prisons each year. Many of them are forced to face intolerable conditions during pregnancy and birth and then lose their babies sometimes after only hours postpartum.

Pamela continues her advocacy work as a Soros Justice Fellow, and is working to pass legislation to end prison birth nationwide. For more information and to learn about a short film about Pamela, you can visit @WINNmovie on Instagram