Prisoners With Physical Disabilities Are Forgotten And Neglected in America 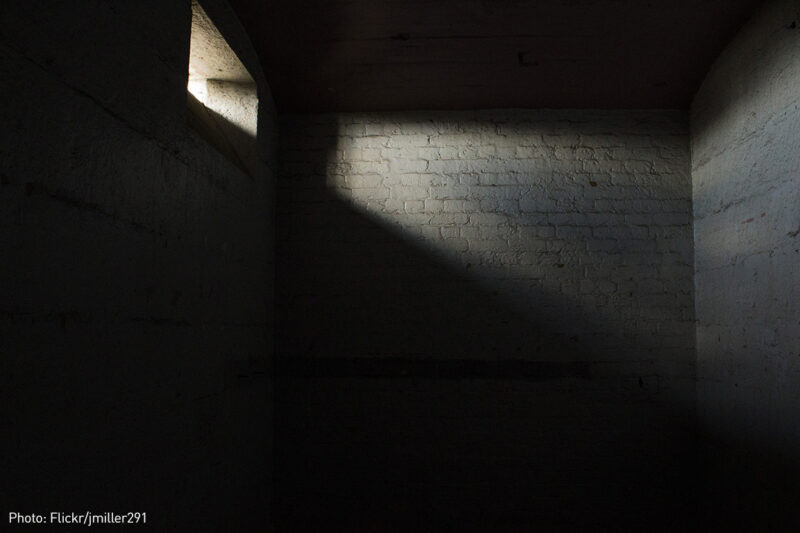 Update: On June 28, 2017, at 2:00 pm ET, the ACLU is holding a Congressional briefing that will be attended by Senator Durbin on the ACLU’s report, Caged In: The Devastating Harms of Solitary Confinement on Prisoners with Physical Disabilities. Speakers will include Clarence Taylor and Dean Westwood, both formerly incarcerated prisoners with disabilities; Jamelia Morgan, author of the report and staff attorney at the Abolitionist Law Center; and Leann Bertsch, Director of North Dakota Department of Corrections and Rehabilitation and President of the Association of State Correctional Administrators. The briefing will be held in SVC Room 212-10 at the U.S. Capitol Visitor Center in Washington, DC. To attend, RSVP here by 10 AM ET on June 27.

Dean Westwood arrived at Coffee Creek Correctional Facility in Oregon in a wheelchair. Prison officials required him to surrender his property, submit to a search, and agree to administrative procedures like finger printing. This is standard practice. But unlike other detainees, Dean is paralyzed below the waist and has limited use of his arms and hands.

Staff at the Oregon jail didn’t know how to handle someone with his disability. They rough-handled his limbs and pulled his fingers apart to get his fingerprints. They stripped him down for a search, rough-handling his genitals. They forced his body into a set of jail clothing that was a couple of sizes too small, which caused Dean severe irritation below the waist.

They then placed him alone in an isolated medical cell for approximately seven days. Without the means he needed for assistance in moving around, Dean lay flat on his back in an isolation cell. He endured painful convulsions because the jail failed to provide him with his medically necessary anti-seizure medication.

The way Coffee Creek jail officials treated Dean Westwood is a travesty, and his story is one of many. Prisoners with physical disabilities constitute one of the most vulnerable populations in detention, yet across the nation, they are needlessly subjected to neglect, denied services, and placed in solitary confinement.

Read the Full Report: Caged In

Recent court cases have brought to light the serious violations of the rights of prisoners with physical disabilities. In March 2015, the Los Angeles Sherriff’s Department settled a lawsuit brought by the ACLU of Southern California, agreeing to provide mobility devices and physical therapy for prisoners with mobility disabilities after horrifying incidents of neglect and abuse. In an ongoing class action lawsuit, prisoners held in Illinois state prisons challenged the denial of, among other things, alert systems that would provide warnings to deaf prisoners during fires and other emergencies in the state prison facilities. Another recent case against the Louisiana State Penitentiary at Angola alleges that corrections staff refused to provide a blind prisoner with a cane for 16 years. The problems, however, didn’t stop there. The prison also declined to place him in a facility with accommodations for the blind. As a result, he was forced to rely on other prisoners rather than prison staff to carry out his daily activities.

Neglect is only part of the story. Prisoners with physical disabilities are at constant risk for placement in solitary confinement and its attendant harms. Though few studies exist examining the physical harms to prisoners placed in solitary, research suggests that placement in solitary can exacerbate existing disabilities or chronic conditions, particularly in cases where adequate care and treatment is not available for prisoners held in solitary. There is also extensive research that shows that placing individuals into solitary confinement causes devastating psychological harms.

Worse still, prisoners are often placed in solitary not as punishment but for logistical reasons. For example, when there are no available and accessible beds in the general prison population, prison officials may place prisoners with physical disabilities in solitary confinement as a solution to overcrowding.

In Maryland, Abdul Muhammad, a blind prisoner, sued the Maryland Department of Corrections (DOC) for placing him in solitary confinement and denying him access to showers, phone calls, religious services, visitation and library privileges as well as educational and vocational programming. The complaint alleges that prison officials informed Muhammad they were placing him in solitary until they figured out where to place him long term. Muhammad remained in solitary confinement for almost six weeks. The Maryland DOC’s actions flout federal regulations prohibiting the use of solitary in this way.

All prisoners in solitary risk being denied access to prison rehabilitative programs and services, but the harms of this denial are particularly acute for prisoners with physical disabilities. And it is a harm that perpetuates further harms. Prisoners are often required to complete “step-down” programs to progress out of solitary confinement. When institutions fail to provide, for example, a manual for prison rules or disciplinary procedures in Braille for blind prisoners or sign language interpreters during disciplinary hearings for deaf prisoners, they are creating significant obstacles to prisoners with physical disabilities being able to progress out of isolation. Rather than ignore or harm these prisoners, states must address and accommodate their physical disabilities.

There is much that is wrong that needs to be righted in our prisons and jails. To ensure that prisoners with disabilities are guaranteed their rights under the ADA, criminal justice advocates and disability rights advocates must come together to address discrimination against people with disabilities and work to make the promise of the ADA a reality in prisons and jails across America.