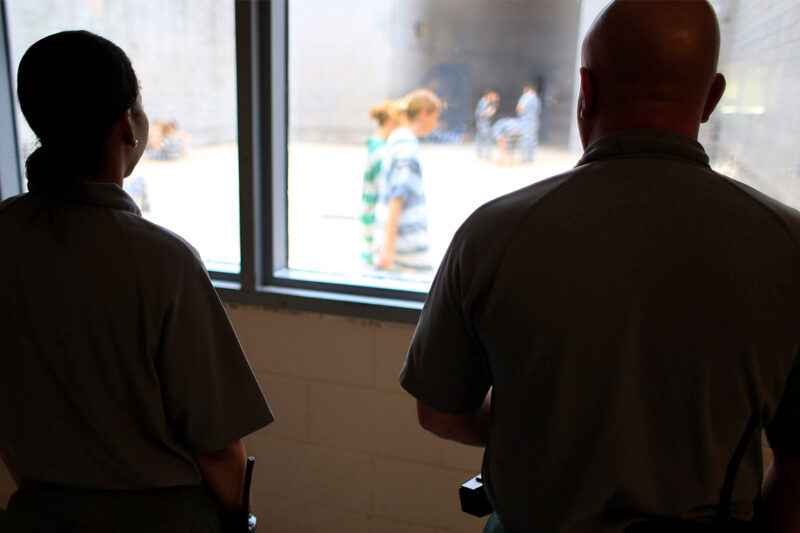 In March 2011, a tactical team of guards at a state prison in Lincoln, Illinois gathered 200 women and ushered them into a gymnasium, where they were brought in small groups into a separate room nearby. Inside that room, they were told to strip naked in plain view of other guards, cadets, and civilians, without any explanation. Women on their periods were ordered to remove their tampons and sanitary pads. One-by-one, each woman was ordered to lift her breasts, cough and squat, and display her vaginal and anal cavities. Those who refused were threatened with punishment. In total, the ordeal lasted nearly four hours.

When used by combatants in war and armed conflict, these tactics are a strategy used to assert control and instill fear in communities. In this case, the mass strip search was purportedly carried out as part of a cadet training exercise, meaning that the women were subjected to this humiliating violation without even the pretext of an immediate safety need.

Being forced to strip naked or expose oneself to others would traumatize anyone. But for most incarcerated women, that trauma can be even more severe because so many are survivors of and witnesses to abuse and violence. In Illinois alone, one report found that that 75% of women in prison had histories of sexual abuse and 98% had histories of physical abuse. Studies show that when survivors are revictimized, the harm to their emotional and mental health is greater than that to others. Practices like these perpetuate the devaluation and compound trauma that most women behind bars are already dealing with.

Nevertheless, strip and cavity searches like those endured by the women in Lincoln are not uncommon. In 2016, thirty-one women—including 14 transgender women—in immigration detention in Santa Ana filed a federal complaint challenging the use of strip searches that involved a “labia lift.” Earlier this year, the San Francisco Public Defender’s Office submitted a complaint to the county sheriff alleging that women in County Jail No. 2 were similarly made to strip in view of others and directed to expose their genitals. And only a few months later, Los Angeles County entered into a $53 million settlement to resolve a 2010 lawsuit brought by women subjected to strip searches that also involved a “labia lift,” after a federal court ruled that the practice violated the women’s constitutional rights.

In the wake of being subjected to the strip search in Lincoln, the women filed suit in 2014 to end the practice, alleging it violated the Eighth Amendment’s prohibition against cruel and unusual punishment as well as their Fourth Amendment right to privacy. While the Supreme Court has held that strip searches and visual body cavity searches by prison officials are permissible, they can only be used if they are reasonably related to some legitimate penological interest, such as preventing contraband from being smuggled in the prison or protecting people’s safety.

In this case, the district court threw out the women’s Fourth Amendment claim, and a jury later ruled against their Eighth Amendment claim. In a divided 2-1 decision, an appellate court affirmed dismissal of the Fourth Amendment claim on the grounds that corrections officials conducted only a “visual inspection, not a physical intrusion,” and visual searches are permitted. The dissenting judge pointed out that, “it seems odd … to make the question of whether a prisoner has a reasonable expectation of privacy under the Fourth Amendment in the integrity of his or her intimate body cavities dependent on who it is that does the probing or penetrating.”

But the women aren’t dropping their case. Last week, they filed a brief asking for a review of the appeals court’s decision by a larger panel of judges. The ACLU and the MacArthur Justice Center, along with partner organizations including the Women’s Prison Association, Just Detention International, Uptown People’s Law Center, as well as scholars of gender-based violence, have submitted an amicus brief in support of the women. The brief argues that, in addition to being protected against cruel and unusual punishment, people’s right to be free of government overreach doesn’t end at a prison’s gates. Preserving the right to privacy enshrined in the Fourth Amendment means placing limits on government power. Neither incarceration nor the operational needs of any prison should override those limits.