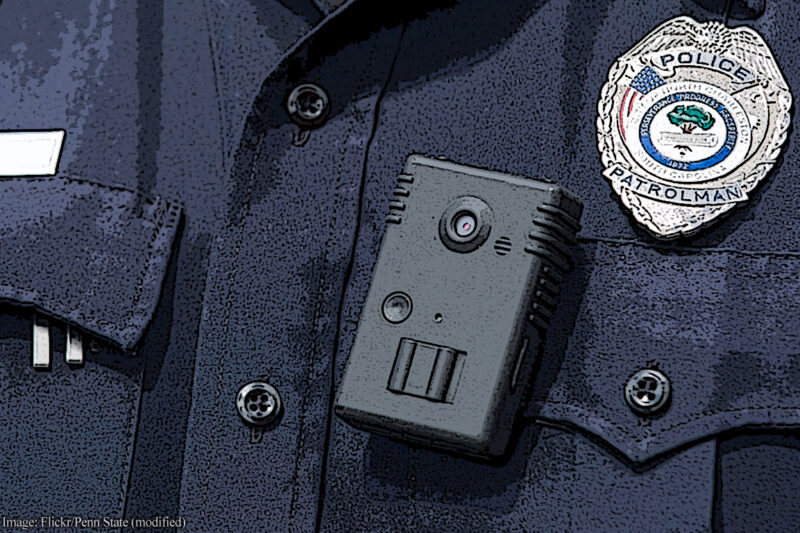 If you’re a police officer, and you’ve just shot somebody who didn’t need to be shot, and you’re wearing a body camera, and you want to get rid of the evidence that camera has probably captured, what can you do? Unfortunately, in many places, you might have options.

That’s what at least one case in Albuquerque suggests. I recently spoke with Laura Schauer Ives, a civil rights attorney in New Mexico (and former legal director for the ACLU there) who litigates on police use-of-force issues, including the infamous shooting of James Boyd, a mentally ill camper. By virtue of her work on that case and others involving the troubled Albuquerque Police Department, Ives may have as much or more knowledge as anyone in the nation of all the ways that body cameras can go wrong — especially among those working on the other side from police and prosecutors in our adversarial justice system.

After what she’s seen in Albuquerque, Ives strongly recommended to us that we make an addition to the ACLU’s police body camera model policy to include a requirement that where shootings and other uses of deadly force by officers are investigated, not just video but also the camera itself be taken into evidence. We have now updated our model policy to version 2.1 to include such a provision.

Ives’s recommendation comes out of her experience working as a lawyer for the family of Mary Hawkes, a 19-year-old woman who was shot to death by an Albuquerque police officer in April 2014. There were numerous officers on the scene when Hawkes was shot, and several, including the shooting officer, were wearing body cameras. Yet, as Ives told me (I’ve edited her comments for clarity and length):

For all these officers — and there were five in the vicinity that could or should have captured the shooting — there are no clear recordings from the incident that we’ve been provided. All five were wearing body cameras.

The sergeant on scene, Brian Maurer, said he believed he turned his camera on during the incident, but the department later said he hadn’t recorded anything. In his deposition, the sergeant testified that his camera had never malfunctioned like that before. But we don’t have the camera as it existed at the time of the shooting to determine if the alleged malfunction was real or not.

There was another officer who was standing nearby when the shooting happened. He originally said he hadn’t seen the shooting at all. But when confronted with the only images of the shooting that we have — very vague footage from an officer’s lapel camera who was parking his car at the time of the shooting — it was clear that this officer lied about not seeing the shooting. The footage showed that he was pointing a gun towards Mary Hawkes when she was shot. So there’s no question that he witnessed the shooting.

That officer did record, but APD only produced a video with 10 seconds of buffer captured. On Taser cameras the default setting is 30 seconds of buffer, but his only had 10 seconds — and the 20 seconds that were missing would have captured the shooting. APD said it was because he’d powered his camera all the way off, defeating the buffer feature. We thought, “Great, we should be able to tell if that’s in fact a reasonable story, if we had the actual camera as it existed at the time of the shooting — but again we don’t.”

Yet another officer could have captured important footage of the shooting, but his recording was so heavily pixelated it was impossible to glean anything from the images. No one in the department had ever seen footage corrupted like this before, and APD claimed that this was the result of yet another malfunctioning camera. Again APD did not preserve the camera so we could test this.

The fourth officer said he was recording on his Scorpion camera at the time of the incident, but there was no video on his camera’s SD memory card. To explain the discrepancy, APD claimed that there was a malfunction with the camera, but we couldn’t examine it as it existed at the time of the shooting to test APD’s theory because APD did not immediately tag the camera into evidence. Instead, they let the officer keep his camera and continue to record unrelated incidents that followed. Apparently the camera was good enough to return to the officer and worked on those occasions, at least.

Finally there’s the shooting officer himself. He claimed that his cord had come unplugged. The department sent his camera off to Taser for analysis, and Taser found that the camera had been powered on within 8 minutes of the shooting, but was powered off in the moments before. Taser couldn’t tell whether the camera had been powered off by the cord disconnecting or a power switch. It did say that his cord on his camera was functional — though it did have some damage, nothing that would impact the camera’s functionality.

It seems pretty clear that the department set out to hide the videos of this incident, assuming there wasn’t some enormously coincidental cluster of malfunctions. Ideally, we’d want a police department to have the technology, policies, and procedures in place necessary to ensure that neither a handful of officers in the field nor a department overall can conspire in that way. The Hawkes case shows how far short of that situation the Albuquerque Police Department fell at the time. What happened to all the camera evidence in that case? Diving into the issue as part of her litigation, Ives identified multiple places where a department could make incriminating video go away. She explained:

Not uploading video off the camera

First of all, if you’re an officer you can simply not upload the video from your camera. If you don’t, it just sits forever on the camera. And we wouldn’t know it was there unless we had the camera itself. The department alleged that they were synched and docked, and nothing was on them, but there’s no way to trace that unless you have the camera itself.

Keeping it out of the cloud

You can also lose video after you dock it. In Albuquerque you can either upload video through the docking station, which uploads every video straight to Evidence.com [Axon/Taser’s cloud service] without further user input. Or you can also run it through another Taser product called “Evidence Sync.” That’s a desktop application that allows officers to preview the videos on their camera and then manually choose which videos to upload by clicking the check marks by the desired videos. Once you put videos in Evidence Sync, they can just hang out there forever in a sort of purgatory. They don’t get to Evidence.com unless you affirmatively select the video and upload it.

And it was never clear to me why an officer would use Evidence Sync over docking. Why wouldn’t you just do this automatic docking system where everything goes from the camera to the department’s cloud account? I think the answer to that is that it lets officers pick and choose the videos they want to upload. But that means Evidence Sync is another place where you can lose a video.

Not putting the right case number on a video file

The other way to lose a video is based on the fact that the Evidence.com system is dependent upon an officer or a department providing the appropriate case number. So if I upload a video and I don’t want it associated with a case, all I have to do is put a different number with it or no number at all. And the only way to tell exactly how many videos were on a camera at a given time is to have the camera itself.

Taser has a function where you can take an original video, create a clip of it, and extract a new file. The new file takes all the metadata from the original video, including the case ID, and applies it to the clip. In our case there were a number of videos where there was no indication in the Evidence.com logs that they were clips and had been edited, but when you went to download them, it identified the video as a “clip.” We contacted Taser’s help line, and they said “Yeah, that means the video’s been edited.”

But then a Taser engineer said, without commenting on the specific “clip” files we had identified in our case, “Oh no, that’s just what happens when a video is uploaded through Evidence Sync and the uploader did not enter a case ID.” But not all the video the department uploaded through Evidence Sync said “edited,” and the function itself doesn’t make any sense. Why would a department ever need to create a new file that retains metadata from the original? And, why would an original file ever be called a “clip” when Taser’s manual identifies clips as edited videos? We don’t know exactly how the “extract and create a new file” function works, but our experience raises important questions.

One of my takeaways from Ives’s experience is that we should not think or speak about “video evidence” produced by police body cameras; we should use the term “camera evidence.” There is a lot of evidence on a camera besides the video itself, and that evidence can be important — especially to remove any suspicions that police officers or a department may have messed with cameras or video. This is doubly true when it comes to removing community suspicions in the case of officer shootings.

Finally, what does Ives’s experience tell us about the company Taser?

The company, now renamed Axon, controls a majority of the U.S. police body camera market. We at the ACLU and others who work on technology policy always point out that how products are designed can have an important, even determinative impact on how they’re used. They can enable and encourage compliance with good civil liberties practices — or the opposite. Ives’s experience suggests that Taser is offering maximum flexibility and empowerment for police officers — who are, we should keep in mind, its clients — rather than designing its products to minimize community doubts about a department’s handling of evidence that might make it look bad and maximize the chances that the truth will emerge through the adversarial justice system.

A prime example of this is how the company’s Evidence Sync product appears to have let Albuquerque officers avoid having certain bodycam videos properly uploaded to the company’s cloud service Evidence.com. In order to increase the freedom and control of its customers —police officers — they’re degrading the reliability of video as evidence.

The incentives of industry players selling to police do not necessarily line up with the public interest, and communities looking at allowing their police departments to acquire body cameras should ask sharp questions about the design of the technology their departments are considering. At the ACLU we recently joined allied groups in sending a letter to an ethics board that Axon has (commendably) stood up, asking that the board not restrict itself to the artificial intelligence issues it was originally charged with looking at but also consider the ethical implications of all Axon’s digital products.

So what happened in Ives’s lawsuit on behalf of Hawkes’s family? In the end she settled the case with the city for $5 million. “We got a favorable ruling that the shooting was unlawful essentially because much of the evidence we could have used to establish our case was not preserved by the department,” Ives told me. In addition, the APD, which is under a settlement agreement with the Justice Department, has at the Justice Department’s prompting agreed to place cameras into evidence in such situations.

Still, that’s not standard policy and practice in departments across the nation. It seems clear that it should be.