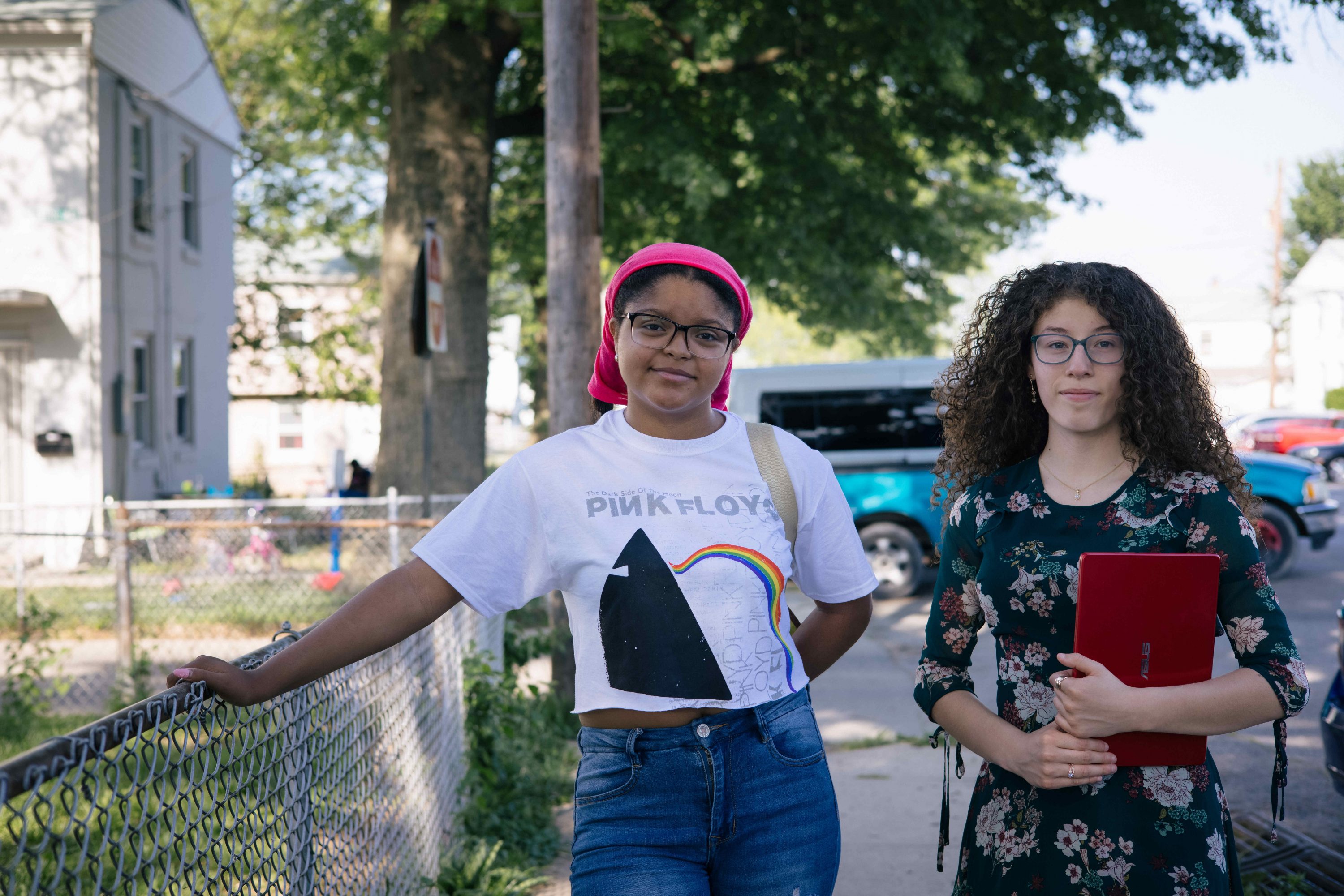 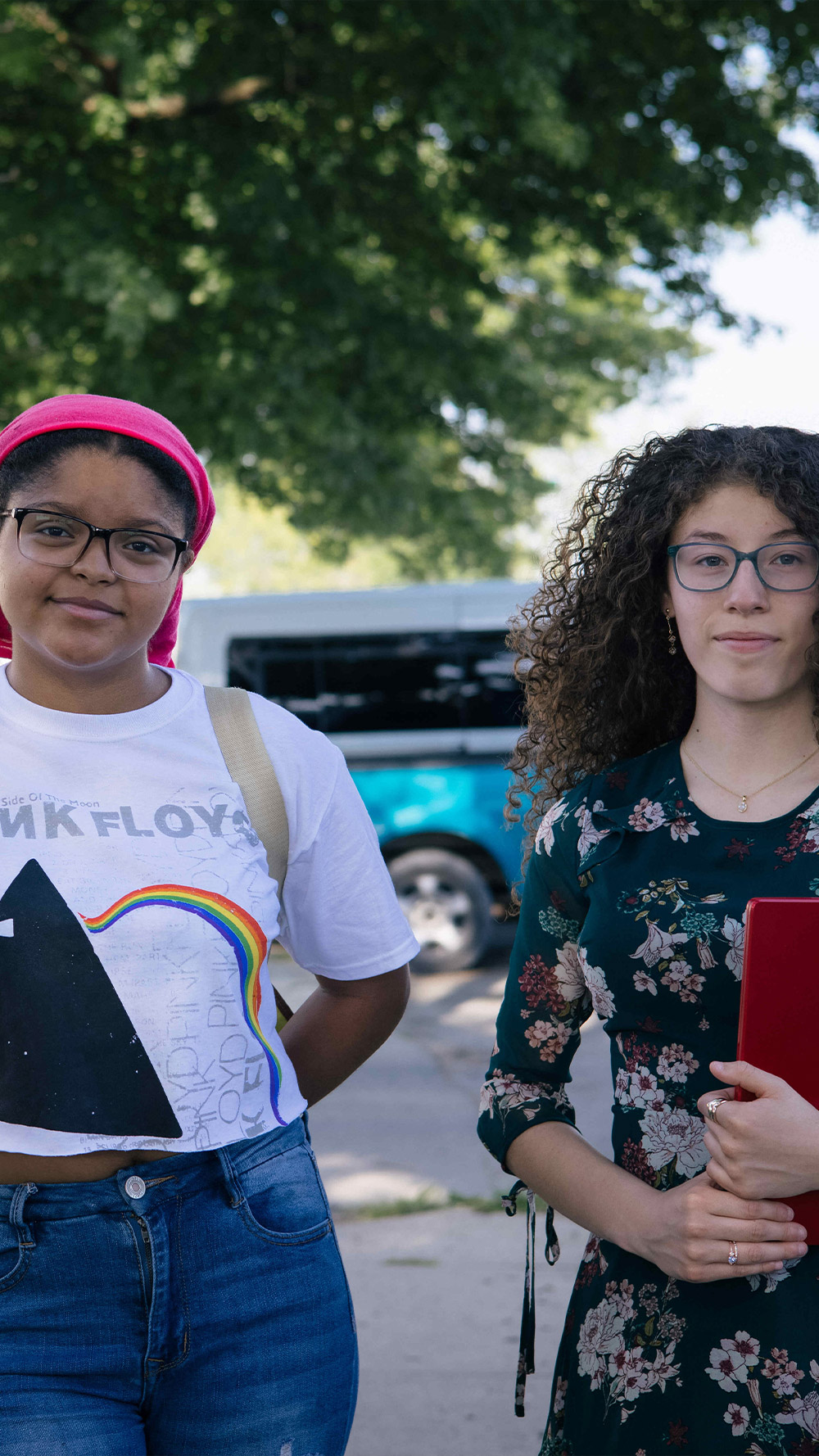 Kimberly Vasquez and Yashira “Yoshi” Valenzuela are two Baltimore high school students who live in households that experience frequent power cuts, particularly when too many electronics are plugged in at once. When their classes went virtual last year, it didn’t take long to realize they had a serious problem. Participating in class required connectivity to high-speed, broadband internet, and the low-cost plans their families could afford did not cut it. Together, they lead the student-led advocacy group Students Organizing a Multicultural and Open Society (SOMOS), and have organized student boycotts and letter writing campaigns, testified in front of the Baltimore City Council and State Assembly, and ultimately pressured Comcast to agree to raise the minimum speeds on its low-cost plan.

While it was COVID-19 that spurred Kimberly and Yoshi to act, the digital divide has existed for decades and has disproportionately impacted Black and Brown communities, who are less likely to have access to broadband internet at home. Not having broadband access means you don’t have access to equitable opportunities, whether in education, work, health care, or just connecting with a rapidly digitizing world. Broadband access is a basic utility, and it should be treated that way.

Kimberly and Yashira are now about to graduate. In this week’s episode of At Liberty, we talk with them about what it’s like to live without high-speed broadband internet as a student and how they continue to fight the digital divide.

KIMBERLY: I was seeing a problem [with speeds under Comcast’s low-cost plan] when at the end of the school year of 2019-2020 where I was having issues with going into Google Docs, I kept on being disconnected. And then during the summer my little sister … was going to summer school and I was going into meetings and I was struggling to go into the meetings and it was only us two … And so I already realized that this was going to be a problem for the next school year.

KIMBERLY: It was difficult hearing Comcast representatives falsely promoting this package when at best it only provided Internet for one or two devices, and [to hear them] them claiming that high speed. But it doesn’t it didn’t seem high speed to me if I couldn’t get online at the same time as my younger sister. [They told me] it was probably because I had 20 devices plugged into one outlet, which in my neighborhood, if I did that, I would have no electricity. So I don’t think that’s the problem. And in fact, it was a lot of blaming it on me and on customers, [more] than really looking at their service and really saying, you know, maybe it isn’t good.

How did you expand the campaign for broadband access across Baltimore?

YOSHI: We decided that there is more that needs to be done in the city. There are millions of students, not only in Baltimore but across the world, who currently do not have access to devices and good quality internet. We planned and attended other online press conferences with so many other nonprofits across the country. And we garnered a lot of grassroots support from the people in Baltimore City and across the country.

KIMBERLY: This issue was getting coverage in BuzzFeed, in the New York Times. And so when we’re putting so much pressure on them, there’s only so much they can do to defend themselves. And so, I can personally say as an Internet Essentials (Comcast) customer, even with the doubling of speeds, I’m still having problems. And I believe it’s because they only increase their upload speeds two megabits per second. That’s what you need to go into video conferencing. Obviously right now with everything online and with video conferencing being such a daily task, there needs to be more upload speeds …. I actually even purchased a portable charger because now I have to be on my phone for classes … I use my own data a lot of the time in order for my sisters to use the internet for their classes.

What would you tell other students struggling with lack of broadband access?

YOSHI: My advice to other students who are currently struggling is to reach out for help, like communicate with your teachers, administrators at school, let them know what your situation is, let them know that you’re struggling and come up with a plan where you can complete the assignments at a reasonable time that also works with your teacher. On top of that, don’t stress yourself out too much.

For students who want to make a difference, how can they get involved?

KIMBERLY: I was very shy. But I feel like what got me to being unapologetically myself was having a platform, having other people that I could relate to. SOMOS was a platform for me to connect to other students who were facing [similar issues]… a lot of our members are immigrants or children of immigrants or Latinx. Having the voice of groups that are minorities is great to put at the forefront because those are usually who get the worst of the worst if I’m being fair, as well as Black voices. So for me, I’ve seen that a lot of students hesitate in putting out their story, and so I just want to say that your voice does matter.

What would you say to President Biden and the FCC?

KIMBERLY: I really would like to see municipal broadband internet throughout the nation and first going into communities that are disproportionately cut off from internet. Funding is a good way to go, but as Yoshi said, talking to the community who knows what is going on and what they’re facing — they know what’s the best solution that will effectively help them.

You are both about to graduate. What’s next?

YOSHI: I’ll be going to University of Baltimore, I’m on a full ride [scholarship] thankfully. I will be studying public policy.

KIMBERLY: I’m actually going to go to Goucher College and I am potentially majoring in political science. Funny story: I wanted to be a forensic scientist, which I could still do and do advocacy work. But this just has amazed me and sparked something in me, such that I steered into political science. But I’ll still be in Baltimore.

YOSHI: Yeah, we’re going to talk every day, we’re still going to keep working and hopefully we’ll still keep working with SOMOS and this campaign and continue doing all this work, hopefully not forever, but for as long as we need to.

Nationwide, there have been significant gains in the fight to extend broadband access, indicating that the government is finally starting to treat it like the basic utility it is in today’s world. Congress created the Emergency Broadband Benefit (EBB), which will provide families with a $50 subsidy to afford broadband access during the pandemic, and the Emergency Connectivity Fund, which will help students connect. President Biden’s American Jobs Plan also prioritizes broadband access. Unfortunately, given the scope of this problem, the government needs to do more. The FCC must extend broadband access by improving the Lifeline program and ensuring the equitable and efficient rollout of the EBB in order to reach unserved and underserved communities, including those on Tribal lands. For their part, Congress and President Biden must bolster the EBB, pass the Accessible, Affordable Internet for All Act, and work toward a permanent solution for broadband affordability. As Kimberly and Yoshi’s activism show us, for true equality, there must be broadband access for all.

Meet the Students Who Are Taking on Comcast

Here at the ACLU, we’ve been working remotely from home since the pandemic closed our offices in March 2020, which means this podcast is produced, ...