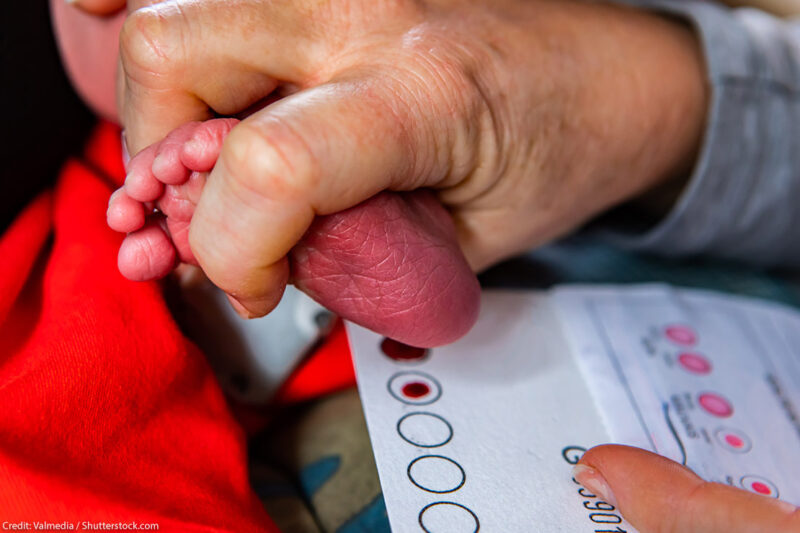 Nearly every baby born in the U.S. has blood drawn in the immediate hours after their birth, allowing the baby to be tested for a panel of potentially life-threatening inherited disorders. This is a vital public health program, enabling early treatment of newborns with genetic disorders; for them, it can be the difference between a healthy life and an early death. But recent news suggests that police are seeking access to these newborn blood samples in criminal investigations. Such use of this trove of genetic material — to hunt for evidence that could implicate a child’s relative in a crime — endangers public trust in this vital health program and threatens all Americans’ right to genetic privacy.

A public records lawsuit filed in New Jersey this month details how police subpoenaed a newborn blood sample to investigate a 1996 cold case. While law enforcement’s desire to use these blood samples in criminal investigations was always a possibility — and one the ACLU has opposed — the increasing use of Investigative Genetic Genealogy (IGG) has only increased the government’s interest in easy access to people’s DNA. While few have heard of IGG, many have heard of its application to cold cases: One high-profile example is the 2018 identification of the Golden State Killer as former police officer Joseph James DeAngelo Jr. In IGG, DNA is isolated from a sample left at a crime scene and a rich genetic profile is created and uploaded to a genealogy website in order to map out family trees. In just four years since IGG first became public, its documented use by police has rapidly grown to nearly 200 investigations.

The government has already gone to shocking lengths to obtain DNA samples without a warrant, including lying to a suspect’s family members to obtain their DNA — but the New Jersey investigation represents the first public instance of them turning to newborn blood samples. This threatens both privacy and public health. A failure to act now could mean widespread loss of genetic privacy at the hands of police.

DNA holds our sensitive personal information. Indeed, that’s why the newborn screening program exists: to detect inherited medical conditions from our blood sample that could lead to things like permanent intellectual disability and major health problems if not detected early enough. Allowing the government to access samples with such sensitive information for reasons other than public health would seriously threaten our privacy — particularly given that our DNA reveals such information not only about us, but also our family members.

This newborn screening system relies on public trust. It exists because public health officials agree that the good outweighs the bad — the temporary pain to the newborn and the cost to the parents are well worth the prevention of life-threatening medical conditions among the almost 1 in 300 newborns found to have a genetic disorder. But that delicate balance is thrown off when the government turns to that same data for other purposes, including criminal investigations.

There is no uniform national policy for how newborn screening is conducted. Each state sets its own policies governing which diseases it tests for and the length of time the sample is kept. Parent groups and other privacy advocates have long voiced concerns about these state screening systems. As a result of litigation that argued that keeping blood samples leftover from the screening tests violates privacy rights, some states destroyed samples en masse and have limited how long future ones are stored. Still, the range of storage for states varies from a few months to indefinitely.

And, perhaps most troublingly, “more than a quarter of U.S. states have no discernible policy in place regarding law enforcement access, while nearly a third may permit such access in at least some circumstances,” according to a recent Texas Law Review article. Police access to newborn genetic screening samples is a massive threat to privacy.

This is particularly true when police access is part of an IGG investigation. One study found that soon 90 percent of white Americans will be genetically traceable because of a family member uploading their genome to one of several genealogy websites. With the exponential growth of direct-to-consumer testing companies like 23andMe and Ancestry.com, and a subset of companies like African Ancestry that market to communities of color, that percentage is expected to rise for all Americans. Newborn screening continues to be one of the most successful public health interventions in the U.S., but abuse of this system by police risks turning this public good into a system of mass genetic surveillance, allowing police to trace back centuries of familial ties for many Americans. This could cause a backlash in which states curtail their screening programs in an attempt to preserve citizens’ privacy, or deny the options to use these samples in critical medical screening research. Additionally, more parents may attempt to opt out of the system altogether or request their child’s sample be destroyed earlier than scientists recommend, risking a missed opportunity for early diagnosis.

To restore public trust and protect privacy, states should promptly seek to identify instances in which newborn screening may have been abused by police by surveying their state laboratories. And they must craft policies that restrict any use of the samples by police in criminal investigations. Iowa’s law appears to come closest, with a policy that explicitly prohibits law enforcement access to newborn samples. In addition, more states should implement limits on how long samples are kept—limiting them to the amount of time stated in medical best practices — and should require informed consent to the use of samples beyond the actual screening.