Police Need a Warrant to Collect DNA We Inevitably Leave Behind 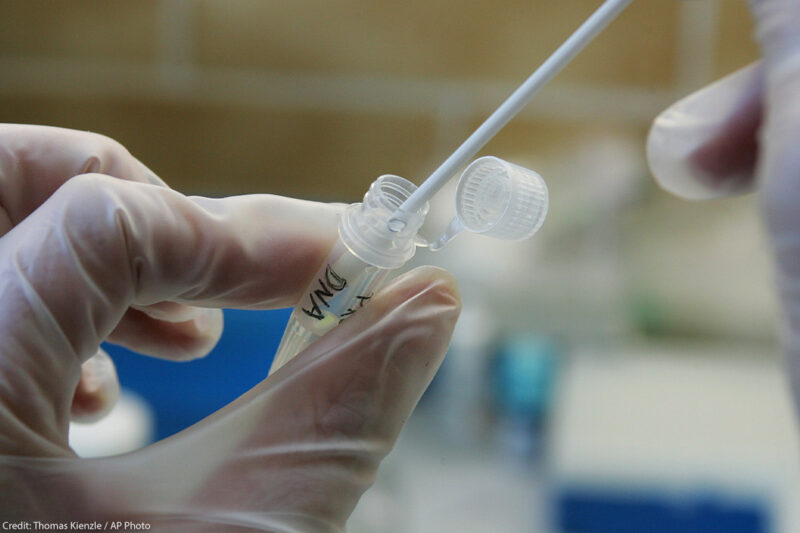 Warrantless access to unavoidably shed DNA is a troubling trend in police investigations.

Every two minutes, we shed enough skin cells to cover nearly an entire football field. With a single sneeze, we can spew 3,000 cell-containing droplets into the world. And, on average, we leave behind between 40 and 100 hairs per day. As long as we live in the world and leave our homes each day, we can’t avoid leaving a trail of our DNA in our wake.

Every strand of DNA holds a treasure trove of deeply personal information, from our propensity for medical conditions to our ancestry to our biological family relationships. And increasingly, police are accessing and testing the DNA contained in our unavoidably shed genetic material without judicial oversight. That’s why we’re asking a court to require police to get a warrant before collecting the DNA we unavoidably leave behind.

Warrantless access to unavoidably shed DNA is just one part of a troubling trend in police investigations involving DNA. Already, in more than 60 criminal cases across the country over the last two years, police have uploaded DNA evidence found at a crime scene to enormous consumer genetic databases — such as GEDmatch and FamilyTreeDNA — in order to search for family members of a possible suspect. The databases often return likely relatives as distant as the suspect’s third cousins. Using this list of likely relatives, police start building out massive family trees based on marriage certificates, death records, and more.

Police then pare the tree down, usually by age and location, in order to identify a likely suspect (or several). Finally, police follow the suspects around until those individuals discard items containing their DNA — anything from a Baskin-Robbins spoon to a napkin to a colostomy bag adhesive patch. Without getting a warrant from a judge, police extract and test the DNA on those items, and use the resulting genetic profile to determine whether that suspect’s DNA matches the original crime scene evidence.

This practice raises profound civil liberties and privacy concerns. Law enforcement is searching through databases of thousands upon thousands of people’s highly revealing DNA profiles, and then surreptitiously collecting and testing people’s DNA without the protections and constraints of a warrant.

In a friend-of-the-court brief we filed this week together with the ACLU of South Dakota and the Electronic Frontier Foundation, we argue that law enforcement must first get a warrant before extracting and analyzing unavoidably shed DNA. The genetic blueprint we inadvertently leave behind as we discard coffee cups, toss crumpled tissues, spit out gum, or even lose hair is entitled to the full protection of the Fourth Amendment.

In the case at hand, State v. Bentaas, a South Dakota state criminal case, South Dakota police sent a DNA sample to Parabon Labs, which created a genetic profile and then ran it against GEDMatch’s database of over one million genetic profiles. The lab uncovered a few family names in South Dakota’s Sioux Falls and Hutchinson County areas and identified possible third cousins. Using this information, South Dakota detectives embarked on their own research to build out a family tree. Eventually, based on these findings, investigators identified the defendant, Ms. Bentaas, as a possible suspect.

Without first obtaining a warrant, investigators went to Ms. Bentaas’s residence and took garbage left outside for the trash collector. From the trash bag, police retrieved cigarette butts, cotton swabs, Kleenex with hair, earplugs, water bottles, glass bottles, beer cans, and dental floss. The government then extracted and analyzed the DNA found on these items. Based on the results, investigators arrested Ms. Bentaas.

To defend its warrantless search and seizure, the state is asserting that people do not have a reasonable expectation of privacy in their trash, and, therefore, people also do not have a privacy interest in the DNA they leave on discarded items. The government’s argument relies on a decades-old, flawed precedent holding that when we leave our garbage on the curb to be collected, we relinquish our Fourth Amendment privacy rights in the items contained in our opaque trash bags.

Whatever the merits of that rule as applied to physical items in the trash, it should not be stretched to permit warrantless searches of DNA. As the Supreme Court recently made clear in Carpenter v. United States, a case argued by the ACLU, old rules permitting warrantless searches cannot be automatically extended to new police capabilities made possible by modern technologies. The scope and types of information that might be discovered through a search of one’s physical trash pale in comparison to the deeply sensitive and highly personal information our genetic blueprints can reveal. And though people might sometimes be able to avoid discarding certain physical items, they cannot avoid shedding DNA on virtually every surface and object they touch. Our DNA requires greater protections under the Fourth Amendment.

The implications of the government’s argument are chilling. If police are allowed to surreptitiously extract and sequence our DNA without a warrant anytime they wish, there is little stopping them from grabbing every person’s trash, secretly extracting our DNA from it, and building a massive database containing our most sensitive genetic information. Already, local law enforcement officers have tried to track anti-pipeline protesters by swabbing cigarette butts left behind at protest sites.

As our ability to decode DNA improves, the scope of sensitive, private information that is discernable will only increase. As it does, so will the need for strong Fourth Amendment protections to keep this information safe from warrantless searches and unconstitutional intrusion.