Student Surveillance Versus Gun Control: The School Safety Discussion We Aren’t Having 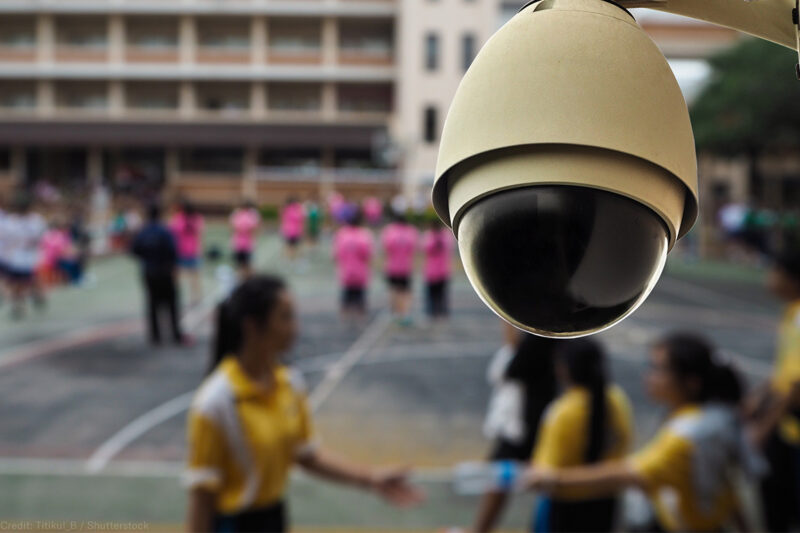 On April 20, 1999, two male students walked into Columbine High School and started shooting. By the time it was over, 15 students were dead and 24 more had been injured. America had changed forever. But in some ways, it hasn’t changed at all.

Nineteen years later, 17 students were murdered on Valentine’s Day at Marjory Stoneman Douglas High School in Parkland, Florida. That event marked the 208th American school shooting post-Columbine. Since Columbine, a total of 143 people have been killed in American school shootings, and 290 more have been hurt. Over these past two decades, more than 221,000 students have experienced gun violence at their schools.

But the physical and psychological harm to students goes far beyond that number.

Today, practically every pre-K through 12th-grade student is required, multiple times a year, to endure the trauma of “soft lockdown” drills, where they huddle silently in a corner and practice not attracting the attention of someone intent on doing them harm. In an increasing number of schools, schools are actively and aggressively spying on their own student bodies. The harmful message these students are receiving is loud and clear and echoes like an ageless Police song: “every move you make…, every word you say, every game you play…, I’ll be watching you.”

Developing a policy response to a public health and safety threat, like school gun violence, generally follows a standard pattern: All potential policy alternatives are identified, research on their efficacy and costs is undertaken, and after analyzing each potential policy’s benefits and shortcomings, the best ones are selected and pursued. That is precisely the process that should be occurring here.

But it is not.

Because of an ideological dispute and the exercise of pure political power, American policymakers have been denied the foundational data and research they need to analyze the impact of gun control measures on school shootings. This is the case because of two acts of Congress.

The Dickey and Tiahrt Amendments

The first, adopted as a rider to a 1996 omnibus spending bill, is known as the Dickey Amendment. That amendment says that “none of the funds made available for injury prevention and control at the Centers for Disease Control and Prevention (CDC) may be used to advocate or promote gun control.” To further drive home its intent, the Dickey Amendment was passed along with a $2.6 million cut to the CDC’s budget, which was exactly the amount they had spent the previous year on firearms research. The practical effect of the Dickey Amendment, as interpreted, has been to block the CDC from studying gun violence as a public health issue and to deter all federal agencies from collecting any data that might reflect poorly on gun ownership.

The second measure, which was enacted as a rider to the 2003 federal appropriations bill, is known as the Tiahrt Amendment. That amendment prohibits the Bureau of Alcohol, Tobacco, Firearms and Explosives (ATFE) from disclosing any data from its National Trace Center’s Firearms Trace System to non-law enforcement entities. That means critical data about the ownership and origins of firearms used in an illegal act cannot be shared with state and local governments, academic and public health researchers, civil litigants, or members of the public.

Without such research and the trace data to support it, it is nearly impossible to determine, scientifically, if gun control measures effectively reduce incidences of gun violence. In our data-driven society, this inability to credibly establish (or refute) the efficacy of gun control measures has placed this potential policy option into a state of perpetual limbo. This is important because common sense gun control measures — which are generally permissible under the Second Amendment — have had great difficulty gaining traction in light of the immense power of our nation’s gun lobby.

America’s gun lobby has a virtual veto over gun control legislation in many of our nation’s state legislatures and on the federal level. In fact, when “following the school shooting in Parkland, FL” the U.S. Department of Education formed a school safety commission to produce “policy recommendations in an effort to help prevent future tragedies,” Secretary of Education and commission chair Betsy DeVos told Congress the commission would not even look into the role guns play in school violence. While there is no telling if this logjam could be broken by the production of irrefutable, data-driven studies showing that appropriate gun control laws effectively reduce incidences of gun violence, including in schools, the gun lobby has not been willing to take that risk. It was for that reason that the aforementioned restrictions on federal gun research and data sharing were put into place.

This by-design absence of a viable, scientifically supportable gun control option has placed immense pressure on policymakers to implement alternative approaches to addressing school shootings. Some of these approaches, like increasing mental health services and instituting anti-bullying programs, have little to no downsides, where implemented properly will not adversely impact on students’ rights and liberties, and – although they are unlikely, in and of themselves, to significantly reduce school gun violence – are likely to yield some positive results. However, other increasingly popular approaches, like student surveillance, can be very harmful to kids.

When schools spy on students using technologies like surveillance cameras, facial recognition software, social media monitoring, body cameras, remotely accessing students’ laptops, and scanning emails and documents they send over school-controlled networks, unintended harms are all but assured. These harms are many and include:

Some school surveillance systems have even been hacked by outsiders, turning them from security measures into security vulnerabilities. And where such systems are deployed in schools, their use is likely to magnify existing racial biases that have historically plagued surveillance technologies and school disciplinary procedures. For all of these reasons, even if student surveillance were an effective approach to reducing school shootings, the related harms would raise significant doubts about the wisdom of deploying such tactics.

But there is no demonstrated link between increasing student surveillance and decreasing gun violence on campus.

To the contrary, student surveillance — and indeed surveillance in general — has been shown to have no deterrent effect on violent crime. And one should not fall into the false forward-versus-backward analysis trap: Even if, after-the-fact, many school shooters are found to have posted threatening statements online, that doesn’t mean most, or even a significant number of students who post threatening statements are likely to become school shooters.

Despite this position, the ACLU would never support a ban on studying the impact of student surveillance. Where, as here, the principal goal is to keep children safe in their schools, all potential policy approaches should be the subject of honest research and vigorous debate, including ones the ACLU — or the gun lobby — oppose.

You may be surprised to learn that former Congressman Jay Dickey – yes, the one for whom the Dickey Amendment is named – has come to agree with that assertion. As Dickey wrote in The Washington Post in 2012, “What we do know is that firearm injuries will continue to claim far too many lives at home, at school, at work and at the movies until we start asking and answering the hard questions,” and to do that “scientific research should be conducted into preventing firearm injuries.”

To enable an honest exploration into how we can most effectively combat school violence, massive pressure must be put on Congress to swiftly repeal the Dickey and Tiahrt Amendments.

Until they are repealed, and researchers at the CDC and elsewhere are empowered to study the potential link between gun control and reducing gun violence in schools, elected officials and school administrators should resist the urge to implement student surveillance measures whose impact on school violence is spurious at best. In short, we must commit ourselves to not harming our students while we are figuring out how to help them. This, of course, will require us to resist the massive marketing efforts of surveillance technology companies, who are looking to profit off our fear.

And if, at long last, the results of gun control studies are allowed to come in, we can finally have a full and well-informed discussion about how we can best keep our students safe.